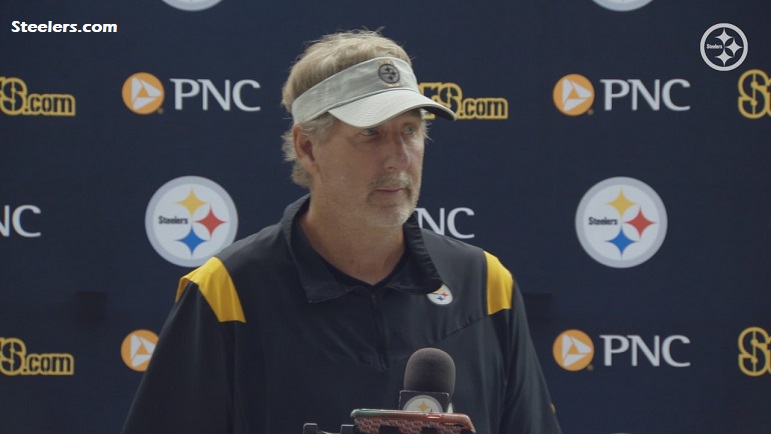 The Pittsburgh Steelers head into Wild Card weekend as double-digit underdogs against the #2 seed Kansas City Chiefs. Rightfully so after the Week 16 matchup that saw the Chiefs dominate to a 36-10 win.

The game seemed over before it even started, as the Chiefs went into halftime up 23 points. Neither side of the ball performed that day for the Steelers, and things will obviously have to change for a victory this weekend. Defensive coordinator Keith Butler is specifically dealt with a tough task in trying to slow down that explosive Chiefs offense.

“The thing that showed up to me more than anything else [after the first matchup] is we got to do a whole lot better job of coaching. That’s the old cliché, playing and coaching, those two things right there. I mean, we got to do a much better job in terms of fairing our guys,” Butler said Thursday in audio provided from the team.

The preparation aspect has been glaringly obvious in a handful of games this season in which the Steelers fall behind early. In the end, that falls on both the offense and defense and ultimately, coach Mike Tomlin. It goes just beyond the preparation from the coaches though, something Butler noted as well.

“[The players] got to do a much better job in terms of preparing themselves. So, for us to have a chance, that’s what we got to do. Both got to get a lot better, coaching and a lot better playing. If we do that, then we’ll have a chance against these guys.”

The first meeting was a bit of a wake-up call, specifically for the young guys. Arrowhead Field possesses arguably the best crowd environment in the league. Having already faced that aspect, the guys should be better prepared and avoid mistakes like pre-snap penalties this go-around.

With it being a playoff game, Arrowhead will only be louder. The Steelers will likely have J.C. Hassenauer up front instead of Kendrick Green, which should help shore up some of the communication issues. The first step to a Steelers’ victory and playing a perfect game is coming in prepared against a potent Chiefs team.