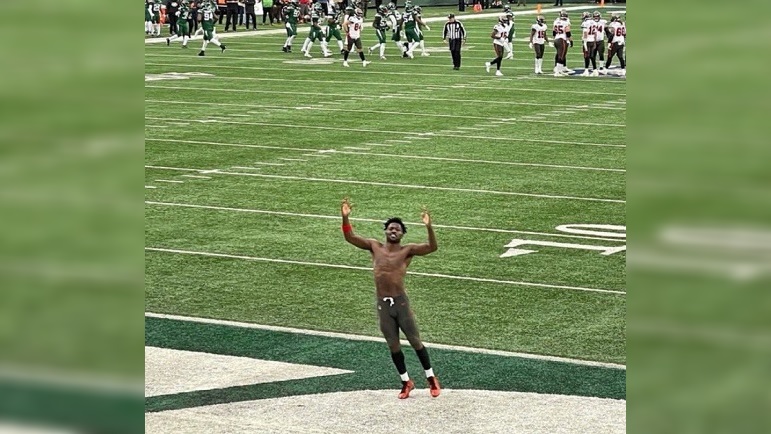 Antonio Brown’s time with the Tampa Bay Bucaneers, and likely the NFL, has come to an end. After seeing moderate success under head coach Bruce Arians, Brown had a meltdown during the Bucs’ Week 17 game against the New York Jets. After seeming to be benched, Brown removed his shoulder pads, jersey, and shirt, before walking off the field and into the locker room.

It came in the third quarter with the Bucs losing to the underdog Jets. Take a look.

Video of Antonio Brown leaving the field after taking off his jersey and shirt and throw it into the stands. pic.twitter.com/1hwNYei5Fq

After the game, Arians said Brown’s time with Tampa Bay is over.

“He is no longer a Buc,” Arians told reporters after the game. “That’s the end of the story. Let’s talk about the guys who went out there and won the game.”

The Bucs came from behind to beat the Jets 28-24. Brown finished the game with three catches for 26 yards on five targets.

Brown reportedly isn’t even flying home with the team, seemingly of his own choosing.

Brown “went to the airport”…

Not with the Buccaneers.

security said Antonio Brown ran out of stadium shirtless &!into a police car to be escorted to flight by himself out of town away from the buccaneers!
this after he tore off his jersey during game threw his shirt in the stands freaking out#bucs #BucsVsJets

After originally signing him in 2020, Arians said Brown would get no second chances. But he did, returning to the team just last week after serving a three-game league-imposed suspension for a fake vaccination card, a story unearthed by his chef who claimed Brown stopped paying.

Brown was perhaps upset after needing just a handful of catches, yards, and one more touchdown to reach major incentives in his contract, earning him another $1 million. Arians, however, told FOX’s Jay Glazer he tried to get Brown into the game and Brown refused. Arians then told him to go.

Just talked to Bruce Arians who said he was trying to get AB to go into game & AB refused. Tried again Brown refused & Arians told him to get out. On if he saw AB take his jersey off.

“Yeah, I did. Never seen anything like it in all my years.” @NFLonFOX

“Hopefully everyone can do what they can to help him in ways he really needs it,” Brady said in part. “We all love him, we care about him deeply, we want to see him be at his best. Unfortunately, it won’t be with our team.”

Brown’s career since forcing his way out of Pittsburgh has been nothing short of a disaster. He never played a game for the Raiders, spent one game with the Patriots, before seeming to find some stability with the Bucs.

At 33 years old with yet another drama-filled moment on his resume, it’s hard to see any other team taking a chance on Brown again. The Steelers’ ability to keep Brown in check for as long as they did is a testament to the organization. Clearly, no other team has been able to do the same for so long.