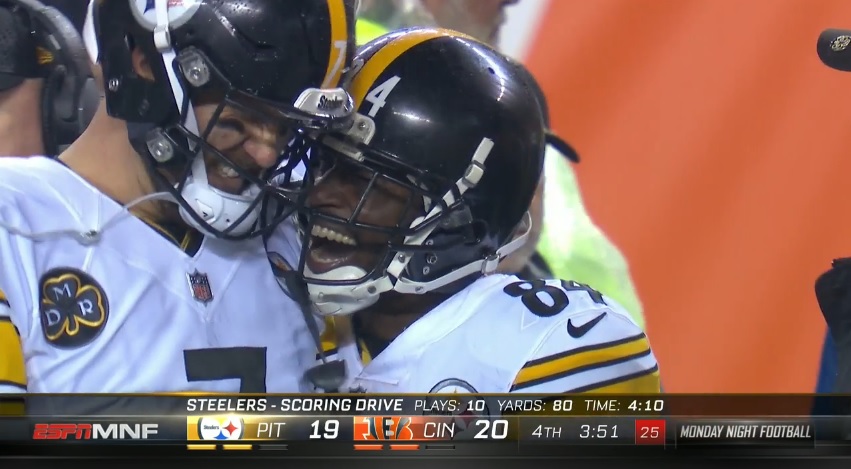 With tonight’s regular season finale between the Cleveland Browns and Pittsburgh Steelers just hours away, we’ve heard from plenty of Ben Roethlisberger’s former teammates, recollecting about their time spent playing alongside him. We’ve heard from Max Starks, Willie Parker, and countless others celebrating what seems to be Roethlisberger’s final game at Heinz Field.

But not every ex-Steeler is convinced this is Roethlisberger’s end. In that minority camp is Antonio Brown, who had this message to a fan via Cameo, a service that allows people to pay money to hear from athletes and celebrities’ about a topic of their choosing. The video was first posted by Barstool Yinzers.

Here is what Brown had to say.

‘I know you’re sad about Ben Roethlisberger retiring but it’s not over for Ben yet,” Brown said. “I know everyone’s wondering is it his last game in Pittsburgh tonight and would it end like this. But it may not end like this. I know Ben, he’s a competitor. He loves to play football. One of the greatest quarterback all time and I just don’t see him hanging it up.”

A strong amount of praise from Brown for Roethlisberger, whose relationship soured as Brown exited Pittsburgh after Brown became upset over comments Roethlisberger made following the team’s 2018 loss to the Denver Broncos. Brown has made similar comments in his post-Steelers’ days so these compliments aren’t brand new but may speak to Brown moving past how things ended in Pittsburgh.

To be clear, Brown said “speculate and recollate” which no, does not make sense. But those are his words, not mine.

Brown ended the message on a cheerful note.

“So let’s be positive. Let’s cheer him on and let’s wish for one of his best games tonight and let’s keep business booming….so let’s keep Big Ben in our warm prayers and hopes and wish him luck tonight. Boomin’.”

Obviously, Brown is being asked to give his thoughts here from the fan who submitted the request. This isn’t Brown giving an organic prediction. But Cameo usually just asks users to submit a topic or a couple of pieces of information, not a script to be read. So these may actually be Brown’s true thoughts.

Brown, of course is 24 hours removed from being released by the Tampa Bay Buccaneers after reportedly refusing to re-enter Sunday’s game against the New York Jets. Brown apparently didn’t feel his ankle injury was healthy enough to keep playing. When told to leave, he took off his clothes and danced in the end zone before walking into the tunnel and leaving town.