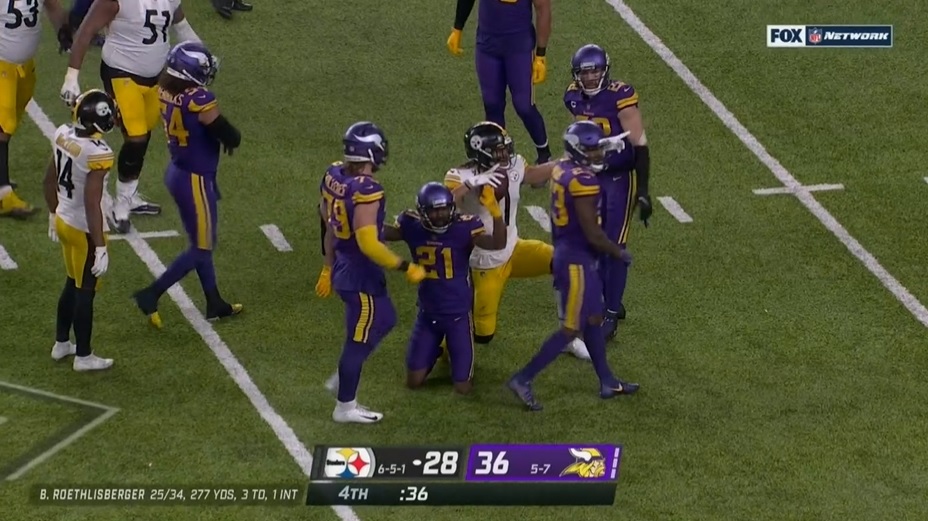 1. Just Rip Off The Bandage – The Steelers are that ex for which you still have feelings. You know the relationship/team isn’t good but they keep giving you hope. Things start bad and then they go on a winning streak. You tie the worst team in the league and lose to Cincinnati and then you go and beat the Ravens. In reality I know they aren’t that good but they give us hope just to stand us up with a performance like this in the first half. Just be bad or (more unlikely) be good. Enough is enough.

2. Movin’ On Up – The Steelers caught a break with Adam Thielen not playing this week and the Minnesota receivers group not being incredibly deep. Just stop Justin Jefferson and make the others make plays. He was so ridiculously open he nearly had three touchdowns in the first fifteen minutes and thirteen seconds of game time. The touchdown came on a two man route and he was wide open. He had a five yard cushion just about everywhere on the field with Cam Sutton playing him like he was contagious. The defense is usually very good at taking away the number one receiver. They weren’t even close in this one.

3. Two Minute Boring – So nothing went right in the first half but they got the ball back with 2:20 left in the half. They ran the ball on first play. They were gifted fifteen yards on a penalty. Followed it up with a pass behind the line of scrimmage that was batted down. Another run after the two minute warning and a short pass to Chase Claypool. The final play was four deep routes with seven defenders in the box and no hot route. If that’s the best you can muster, get on the plane and go home at halftime.

4. Harvin Some Troubles – Being a rookie in the NFL is a difficult task. Pressley Harvin came in with collegiate success and big leg. So far this season he has been up and down with more of the latter recently. I’m not sure what the issue is but he has been incredibly inconsistent. On his first third quarter punt it looked like he may have dropped it too close so he couldn’t extend. Is it mental or physical? Many are complaining about him and giving up on him but is he really the problem with this team? Let him ride it out this year and let him compete for the job next year.

5. They Already Know – The interception thrown in the third quarter was partly on Diontae Johnson for not continuing his route but I got the feeling the he and the other receivers are kind of fed up. It’s the same plays, the same routes, the same poor planning week in and week out. They tried six or seven wide receiver screens during the game that were ineffective and the number of passes batted down at the line of scrimmage is increasing because the defense knows it’s coming out quick and short. There is no creativity to the offense and EVERYONE knows it.

6. No Excuse But… – The NFL scheduling process has never been helpful to the Steelers. They started the season on the road for the seventh straight season. They’ve played on a lot of the holidays over the past few years. However scheduling a Thursday night game after playing Baltimore in any season is just cruel. That rivalry has been one of the most physical in the league this decade and to make either of the teams play on a short week just seems unfair.

7. I Feel You, Fitzy – After one of those 17 first half running plays for the Viking where they averaged nearly ten yards per carry and there were holes in the defense big enough to float a Viking skeid through we saw Minkah Fitzpatrick flip out on somebody. It doesn’t matter who it was but he was all of us in that situation. Yelling at somebody to do something to stop the run. I’ve been watching this team for a long time and I can’t remember every seeing anything that bad from the run defense.

8. What Are You Waiting Fourth? – Another pattern with this offense is they can’t score points until the fourth quarter. Over the last four games they have scored 72 of their 95 points in the fourth quarter. That’s 76% of their points. Is it Ben Roethlisberger having more influence on the play calling? Is it the opposing defenses letting up and letting them back in it? It’s probably a combination of a number of factors but you’re not going to win often playing catch up.

9. Are You New Here? – The confusion of the offensive line was troublesome. The Vikings were putting their linebackers into the A gaps and it completely confused the offensive line allowing five sacks and seven quarterback hits. It’s not the first time they’ve seen a defense mug the A gaps so allowing the free runners not from the blitz but from the defensive line is unacceptable. Not to mention the delay of game penalties because Kendrick Green wasn’t snapping it.

10. Care Over Flare – Give me a team full of guys like Pat Freiermuth and Najee Harris. Those two aren’t coming in and celebrating after everything they do. Harris does everything he can to make a play and you can see the frustration when he can’t. Freiermuth nearly made a very difficult catch on the last play and you could see he was upset with himself. They aren’t celebrating a first down during a two minute drill or sniffing their finger after every catch. They play for the team not for themselves.