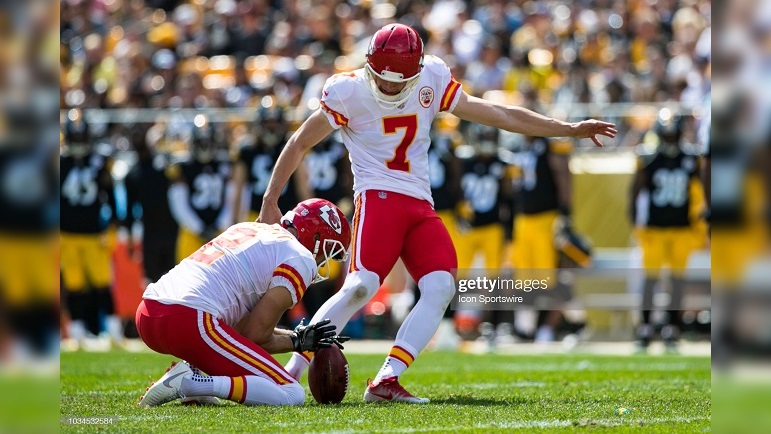 The Kansas City Chiefs won’t have their usual kicker when they play the Pittsburgh Steelers in Week 16 as he’s reportedly been ruled out for that contest after being placed on the Reserve/COVID-19 list a few days ago.

#Chiefs K Harrison Butker, who tested positive for COVID-19 earlier in the week, is out on Sunday because he’s unvaccinated, source said. Elliott Fry is expected to kick.

Chiefs kicker Harrison Butker will reportedly be subject to the NFL’s protocol for unvaccinated players as he apparently isn’t vaccinated against COVID-19, according to Ian Rapoport of the NFL Network. This would mean that Butker goes through mandatory testing on a daily basis and a minimum 10-day quarantine away from the team.

Butker, who is in his fifth year in the NFL, has made 143 of his 159 career field goal attempts and converted on 227 of 242 extra-point tries. He’s deemed one of the best kickers in the NFL right now, and his absence could be felt by the Chiefs against the Steelers in Week 16.

Replacing Butker in the Chiefs’ starting lineup against the Steelers will be kicker Elliott Fry, who was signed to the active roster this week from the team’s practice squad. Fry has some experience previously as an NFL kicker to date as he has been with the Chicago Bears, Baltimore Ravens, Carolina Panthers, Tampa Bay Buccaneers, Atlanta Falcons and even the Orlando Apollos of the Alliance of American Football (AAF). He’s 1-for-1 in career field goal tries at the NFL level and 1-for-2 on extra point tries.