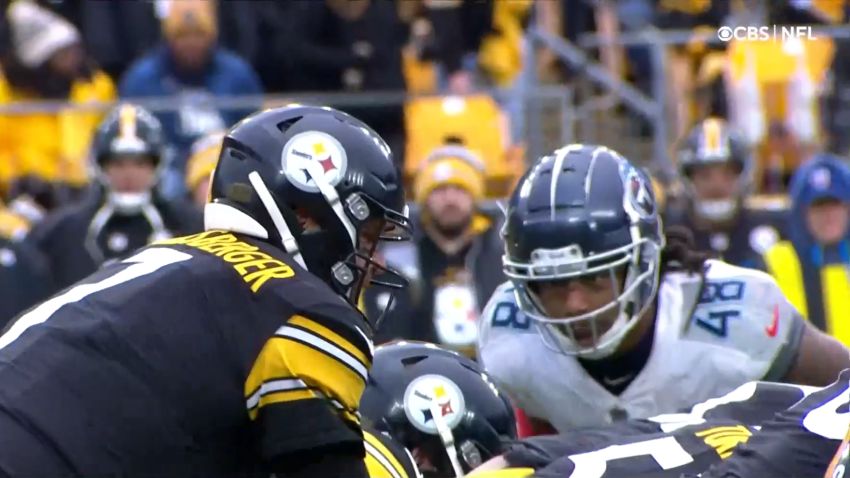 Another game, another Pittsburgh Steelers’ comeback win at Heinz Field as the Steelers shook off yet another disastrous first half to claw their way back to a 19-13 win over the visiting Tennessee Titans Sunday, thanks in large part to four forced turnovers by a Steelers’ defense that played rather inspired 10 days after an embarrassing performance in Minnesota.

Once again though, the Steelers’ offense just can’t get going, shoots itself in the foot with too many pre- and post-snap penalties, and lacks any sort of creativity under first-year offensive coordinator Matt Canada, forcing the Steelers to play in comeback mode more often than not.

Fortunately, the Steelers were able to do just enough on Sunday as Chris Boswell drilled three of his four field goals in the fourth quarter, leading to a much-needed 19-13 come-from-behind victory keeping the Steelers in the AFC playoff picture for at least another week.

It wasn’t a great day overall for Roethlisberger and the rest of the offense as the Steelers left so many points on the field, failing to fully capitalize off of a number of turnovers in the six-point win.

Roethlisberger missed a couple of throws, receivers dropped a couple more, and the offense just felt out of sync and overall a mess throughout the game.

On the day, Roethlisberger finished just 16-for-25 for 148 yards and added his first rushing touchdown in three seasons on a goal line sneak (yes, you read that right) to cap off a largely average day.

Thankfully, he avoided the killer turnovers and continued to rise off the mat while taking a beating, taking three sacks and three quarterback hits, including one to his chin from Naquan Jones and one to his knees from Jeffery Simmons.

This feels really hard to write about Najee Harris, but it wasn’t entirely his fault.

The Steelers’ offensive line was dreadful on Sunday, opening up no holes to speak of for Harris, who rushed for just 18 yards on 12 carries, marking his lowest output of the season. He was hit in the backfield consistently, and had to fight through a number of tackles on every touch just to gain any sort of positive yardage.

In the passing game, the Steelers really used him improperly in the game, asking him to be check down back only, resulting in just two catches for eight yards, both of which came on third downs short of the sticks in which Harris had no chance at converting the first down. That’s largely on coaching and scheme overall.

Tough day for the rookie, but he’ll bounce back.

Not entirely sure where the Steelers’ offense would be without Diontae Johnson at receiver. I shudder just thinking about it.

Johnson had a strong day overall despite pedestrian numbers. He finished with five catches for 38 yards, eclipsing the 1,000-yard mark for the season and made a couple of defenders miss throughout the game with the ball in space. He’s truly the only receiver at the moment who can make a play.

James Washington got a lot of run on Sunday and nearly cost the Steelers the game with a woeful fumble trying to make something happen after the catch. Fortunately, Washington was bailed out by a roughing the passer call on Jeffery Simmons, wiping out the turnover and keeping the drive alive for the Steelers.

Chase Claypool posted on IG prior the game that he was looking to bounce back. The only thing that bounced on Sunday was the football off of his hands as he had an ugly drop on a screen play, and then couldn’t complete a contested catch down the right sideline early in the game. Claypool did draw a pass interference penalty in the third quarter though that set up Roethlisberger’s 1-yard QB sneak for a score.

Prior to exiting the game with his second concussion in three weeks, Pat Freiermuth was having a heck of a game. He took a bad shot on the play from Titans’ corner Buster Skrine on a ball Roethlisberger had no business throwing, and yet he still held onto the football. Freiermuth finished with four catches for 37 yards in the win, but he really struggled in the run game as a blocker, getting dumped by Simmons in the backfield and really struggled to get movement downhill on the edge.

Credit to Zach Gentry though, who stepped up in place of Freiermuth had had a terrific 18-yard rumble on a TE screen, running over two defenders near the end of his run, giving the Steelers’ offense a bit of a spark.

Another week, another poor showing from the Pittsburgh Steelers’ offensive line.

The men up front created no push whatsoever off the ball in the run game, and really struggled to protect Roethlisberger, who was sacked three times.

Kendrick Green just can’t handle power up front as Simmons and Naquan Jones had a field day against him, and Trai Turner was really rough as well. A holding call on Turner and some missed blocks made for a really rough game.

Same goes for John Leglue, who didn’t get a push whatsoever inside and really struggled with the Titans’ tough front.

Tackles Chukwuma Okorafor and Dan Moore Jr. were rather quiet on the day, though Okorafor was hit with a false start penalty.

This group is just really, really rough and they’re trending in the wrong direction at the worst possible time. It’s remarkable this team won on a night when it’s offense put up 168 total yards.

Cameron Heyward was a real force on Sunday against the Titans, recording six tackles, half a sack and a quarterback hit in the win. He was an immoveable object along the defensive line.

Chris Wormley was also good in the game, recording a sack on the first play of the game, and was solid against the run. Once he exited with an injury the defensive line regressed hard as Henry Mondeaux and Carlos Davis were pushed all over the place, allowing the Titans to rack up 201 yards on the ground.

I thought Isaiahh Loudermilk played really well in limited action late, recording four tackles in the win. He played sound gap integrity, held his own at the point of attack and really fought hard through blocks. I’ll take more of that, please.

There’s a new record holder in Steelers’ franchise history for most sacks in a single season. Move over James Harrison, hello T.J. Watt.

Watt was a force on Sunday, fighting through a number of double and triple teams to make plays fro the Steelers, including recording a sack on Tannehill that set the new record with 17 sacks in a single season. And he did it in the 14th game of the season. Remarkable. Watt also had three quarterback hits and recovered a key fumble in the win, giving the Steelers’ defense real life.

Alex Highsmith opposite Watt didn’t have quite as strong of a stat line, but he was just as impactful. He generated a ton of pressure against Taylor Lewan, drew a holding call, and set the edge well against the run, limiting the Titans’ offense when working to that side of the field.

Taco Charlton batted a pass that led directly to a Joe Schobert interception, showing that the young pass rusher is coming on strong in a reserve role in Pittsburgh, and Derrek Tuszka had a huge strip sack of Tannehill with Watt on the sideline dealing with an injury. That seriously may have been the best pass rush rep of his career.

Inside, I was mostly pleased with what I saw, though there is some concerns that remain.

Devin Bush had arguably his best game of the year. He was terrific in pass coverage, making plays left and right, though he did drop an interception in the red zone that hit him right between the numbers. He also broke up another pass later in the first half. He finished with five tackles in the win, flashing some reps against the run, but he still struggled overall as the Titans’ offensive line was able to work to the second level against him.

Schobert had the game-altering interception and was pretty solid against the run. He also had a pressure that forced a quick throw from Tannehill that led to a turnover.

Robert Spillane was just alright in his return from the injured list. He was supposed to be the physical presence the Steelers were needing defensively, and he just simply wasn’t. The Titans ran right at him and they were unfazed doing it. He can’t get off blocks either and isn’t quick enough to shoot under blocks. He also got bullied on a fourth and one late in the game in which D’Onta Foreman powered right past him at the point of attack. So much for being physical.

It is never a good sign when your safeties combine for 24 tackles on the night and lead the team overall, but that’s what happened with the Steelers.

Minkah Fitzpatrick was absolutely incredible on Sunday, recording 14 tackles, saving the Steelers’ defense time and time and time again. He’s a special player. He also recovered a fumble in the win.

Terrell Edmunds recorded 10 tackles and was solid overall in the box, flying downhill for some sticks on quick-hitting passes. He’s average, but he’s consistent.

Outside, I was really concerned with some of the coverage issues as Cameron Sutton was beaten by Julio Jones on the first play. Fortunately, Tannehill was under pressure or that’s a walk-in touchdown on the first snap of the game. Joe Haden was beaten by Nick Westbrook-Ikhine early in the game, but was fortunate when the Titans’ receiver dropped a wide open deep ball.

After that though, the corners bounced back as Sutton forced a key fumble that Haden recovered, and Haden came through with the game-sealing stick on fourth down to force a turnover on downs.

Arthur Maulet had a sound game overall, forcing a fumble early in the game and really providing a physical presence in the box, while Akhello Witherspoon was solid in limited snaps off the bench with Haden’s return to the lineup.

Overall, the secondary helped hold the Titans to just 153 passing yards and didn’t allow a single completion over 18 yards in the win.

Chris Boswell props this entire special teams unit up above water. Without him, it might be the worst in the league.

Boswell drilled four field goals on the day with his lone miss coming from 57 yards late in the first half, and he accounted for 13 of the 19 points in the second half. Special kicker.

Punter Pressley Harvin III is punting himself out of town. He had punts of 26 and 27 yards in the win and is just downright dreadful. Then, when he does boom punts, he’s out kicking his coverage, which led to a 55-yard punt return by Chester Rogers that was somehow aided by a block in the back penalty on the Steelers. That made no sense.

Ray-Ray McCloud played well in the return game though, making a few defenders miss on punt returns, giving the Steelers some good field position on his 17-yard punt return that seemed to spark the Steelers just a bit.