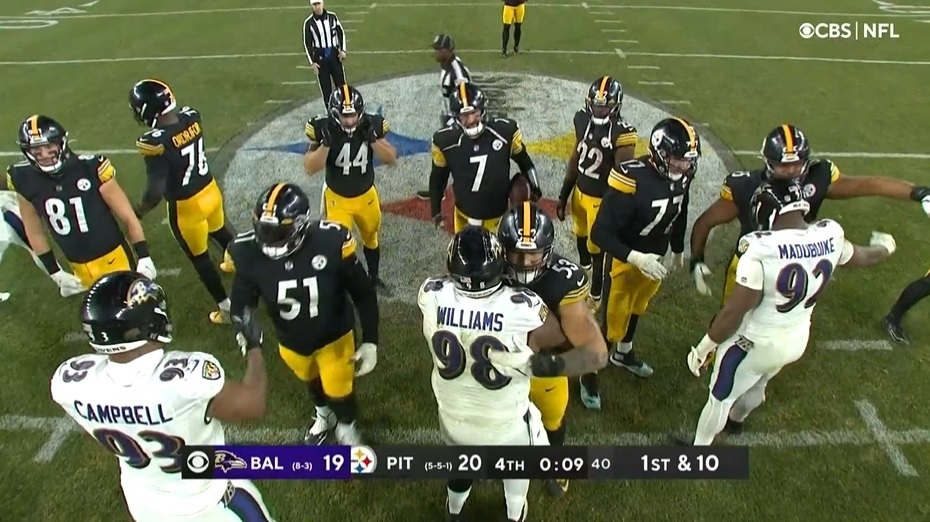 The Pittsburgh Steelers plays four more regular season games in the 2021 season. I plan to attend the last two home games. First this Sunday against the Tennessee Titans. Then the season home finale against the Cleveland Browns. Who knows? I might even drive up with some friends to attend the final game in Baltimore.

In the preseason, many folks gauged the team and predicted a middling team finishing 9-8 or 8-9. Optimists boldly pronounced the team going 10-7 at best, pondering whether that would be good enough to qualify for a wild card playoff spot. I was in the 9-8 group.

Then the Steelers opened the season by upsetting the heavily favored Buffalo Bills. Fans including myself quickly adjusted their expectations. After all, the team should grow stronger with Stephon Tuitt and Zach Banner expected to strengthen the defensive and offensive lines.

Instead, Tuitt remains on injured reserve. Banner is active but has played very sparingly. Kevin Dotson, who many foresaw paving huge holes for Najee Harris has been out since week ten. Other injuries forcing the Steelers to play their fifth left guard. Kendrick Green learning to play center in the hard school of NFL football. The loss of Tyson Alualu coupled with Tuitt’s continued absence not adequately filled by the next men up. The defense giving up gobs of rushing yards. The offense providing frustrating slow starts. But then coming alive late in the game. The list goes on.

And yet, the Steelers are 6-6-1 with four games left. Pittsburgh still with a shot at achieving a playoff position. Strong hints waft in the air. This is likely Ben Roethlisberger’s final season. I don’t know how the Steelers will do over the final four games of this season. Is this Ben’s last season? I don’t think he knows for sure. That’s a decision he’ll make once the season is over. Or the team will make it for him. Meanwhile, I intend to enjoy watching him play each of his games for the remainder of the season. He Steelers last losing season was 2003, the year before Pittsburgh drafted Roethlisberger.

As one Steelers fan from Texas Coby said, Ben playing until he is carried out on his shield. I’ll be there to pay him tribute.

Have used various jerseys all season with mixed result. For the remainder of the season, I will don this one on game days regardless of the result in appreciation #HereWeGo #Steelers pic.twitter.com/qfV2EUCbDA

I host a Steelers Town Hall on Monday nights on Clubhouse. If you have a smart phone, here is a link to join the room: Steelers Club on ClubHouse

Some interesting perspectives. Fans are understandably salty over the Steelers performance against the Vikings and earlier games they were favored to win. A surprising theme among a growing contingent is the preference that the Steelers do not make the playoffs this year. Their rationale is that the Steelers talent limits them to a one and done if they somehow made it to the playoffs.

Do you want the Steelers to make the 2021 playoffs? They likely one and done anyway, be strategic for 2022 draft or Steelers Play to Win Period #HereWeGo #Steelers

Then there are the calls to bench Roethlisberger, fire the coordinators and/or Mike Tomlin. All this with the Steelers still having a playoff shot. These fans prefer the Steelers losing to gain a better pick in the 2022 draft. Let’s blow it up and start over again.

Right now, I just see those questions as distractions. Art Rooney is not firing Mike Tomlin with four games to play. Mike Tomlin is not benching Ben Roethlisberger with a playoff spot still attainable. Neither will either coordinator be fired. Those are all questions for later.

It’s a generational thing. After all, I’ve been a regular Steelers since 1972. I just do not see the Steelers deciding to pack it in even if the analytics say they only have a 5% shot at the playoffs. To me, saying it’s better to lose for the strategic advantage of gaining a few rungs on the draft ladder is not a part of the Steelers fabric. But maybe I’m just stuck in my ways and too trusting of the organization. What do you think?

I always like to offer a music selection. The Steelers season rolling to a close with four games to go. A slight chance to make the playoffs but many believe they will end up with their first losing season since 2003. Regardless, the Black and Gold should hold their head up. Here is Hold Your Head Up by Argent.