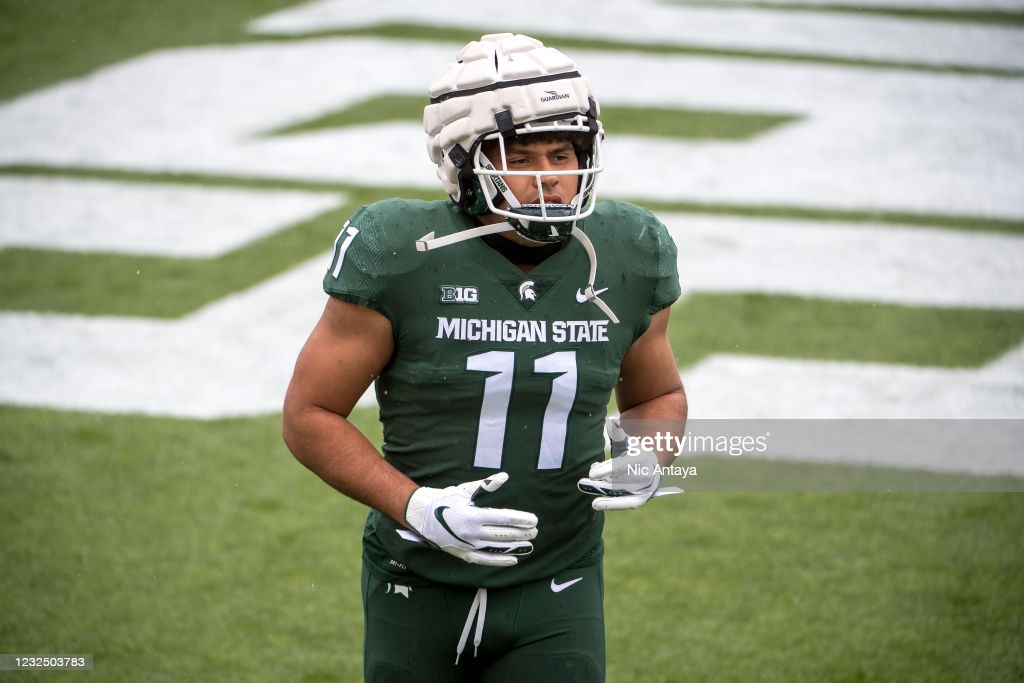 The North Carolina Tar Heels square off against border rival South Carolina Gamecocks Thursday morning in downtown Charlotte. The headliner for the Tar Heels has elected to play in the game and will garner the watchful eyes of plenty of NFL front offices. QB #7 Sam Howell has cemented his status as one of the great QBs in school history, starting as a true freshman and passing for over 10,000 yards and 91 TDs in three seasons. He also is a threat with his legs, rushing for over 1,000 yards and 17 TDs on the ground. The 6’1, 220lb junior is thickly built and bounces off tackles as a runner while possessing a strong arm to attack defenses vertically down the field.

Howell has struggled this season at times, having lost most of his skill positions to the league last season. He can struggle with going through his progressions at times and the style of offense raises concerns as to whether he can make that transition to a pro-style offense. He will have to show more poise and accuracy as a passer, but the skill set and measurables are eerily similar to that of Baker Mayfield coming out of Oklahoma, making Howell an intriguing prospect that will hear his name called in the first or second round of the 2022 NFL Draft.

So Sam Howell might have a strong arm 🤯 pic.twitter.com/doUd7r0dwE

One of Howell’s skill position players to watch is RB #19 Ty Chandler. The 6’1, 210lb senior transferred from Tennessee and enjoyed a breakout season in Chapel Hill, rushing for 1,063 yards on 173 carries with 14 TDs while adding 14 receptions for 215 yards and a score through the air. Chandler is a lean, slender back that runs well behind his pads while having the shiftiness in space to make defenders miss. While more of a committee back, Chandler has the receiving prowess and history as a kickoff returner to be a solid contributor to an NFL backfield as a mid-to-late round draft pick.

Other notable draft hopefuls to keep an eye on for the Tar Heels include LB #44 Jeremiah Gemmel and CB #29 Storm Duck.

For the Gamecocks, star EDGE #1 Kingsley Enagbare has already opted out of the bowl game as a potential Top-50 selection this coming spring. One player NFL scouts will be watching that will play is DL #6 Zacch Pickens. The 6’4, 305lb junior hasn’t decided yet if he will declare or if he will return to school, but he currently projects to be a Day Three selection should he make the jump to the league. If he has a good performance, look for him to submit his name into the draft. Other names to be aware of for South Carolina in this game include DB #12 Jaylan Foster and OL #79 Dylan Wonnum.

Jaylan Foster explodes off the edge and gets the strip sack pic.twitter.com/zqKOSoau9B

The Volunteers will take on the Boilermakers Thursday afternoon in what may seem like a home game in Nashville, Tennessee. The Volunteers have had DB #2 Alontae Taylor opt out of the bowl game, but IOL #68 Cade Mays is pushing to play after suffering a foot injury earlier this season. The 6’6, 325lb senior transferred from Georgia and has been a mainstay upfront for the Vols, having started games having started at both guard and tackles spots for Tennessee and Georgia in his college career. While not the most fleet of foot blocker when it comes to pass protection, Mays is a people mover in the run game, looking to bury defenders into the turf. Look for Mays to go in the middle rounds.

Other names to watch out for on the Tennessee sideline include WR #1 Velus Jones Jr. and WR #4 Cedric Tillman.

The Boilermakers sadly will be without most of their draft prospects in this one as EDGE #5 George Karlaftis and WR #3 David Bell have announced that they are both opting out of the bowl game. Karlaftis was a highly graded recruit coming out of high school and is extremely disruptive when playing chase of the quarterback. He will likely be a Day One selection, if not early Day Two pick come April. Bell is a polished route runner with sneaky speed and explosiveness to get separation anywhere on the field. Standing 6’2, 205lb, Bell has the size and skill set that emulate recent draftee Rashod Bateman in some ways as a likely Top-50 selection and potential WR1 in the league.

The Spartans will battle the Pitt Panthers Thursday night in Atlanta, Georgia in a Top-12 showdown. The headliner for Michigan State, RB #9 Kenneth Walker Jr., has already opted out of the bowl game to start preparing for the NFL Draft. One name Steelers fans will likely gravitate to for Michigan State is TE/FB #11 Connor Heyward. The 6’0, 230lb senior started his career at RB but transitioned to TE to better compliment his skill set and the team’s needs. Heyward’s size makes him a clear favorite to transition to FB/H-back at the next level, but he fits the bill as a rocked-up blocker with the hands to be an effective pass catcher as well as experience being a runner in open field.

Other names to be aware of for the Spartans include S #3 Xavier Henderson and EDGE #5 Jacub Panasiuk.

The main attraction for the Panthers has also elected to opt out of the bowl game to start preparing for the Senior Bowl and 2022 NFL Draft. QB #8 Kenny Pickett has experienced a meteoric rise to prominence this season, going from a late round-hopeful to a potential Day One lock. Pickett threw for 4,319 yards and 42 TDs to only seven INTs this season while chipping in 241 yards and five scores rushing. He doesn’t have an elite arm and can have inconsistencies with ball placement, but Pickett is highly mobile outside of the pocket, having the athleticism to extend the play as well as the zip on the ball to hit the outside breaking routes that NFL teams judge franchise passers on.

Kenny Pickett had more TDs outside of the pocket than any other QB (7)@Pitt_FB pic.twitter.com/Svw2C1fBKA

Outside of Pickett, you can look for TE #7 Lucas Krull to try and boost his draft stock in this game before competing in the East-West Shine Bowl. The 6’6, 260lb senior transferred from Florida and has enjoyed a good season, catching 37 passes for 443 yards and six TDs. DB #21 Damarri Mathis is another name to watch on the defensive side of the ball.

But when we needed it most…

The Badgers travel west to Las Vegas to square off against the Sun Devils on Thursday night. The Badgers will be short-handed in this one as IOL #60 Logan Bruss is dealing with an injury and is considered doubtful to play. A name you need to watch out for is LB #5 Leo Chenal. The 6’2, 261lb junior was named AP All-American after a standout season, racking up 87 total tackles (51 solo), seven sacks, and two forced fumbles. Chenal is a player that can line up in the box as well as on the edge and provide relentless pursuit of the ball both as a pass rusher as well as a run defender. Look for Chenal to go in the middle rounds come April.

#Wisconsin LB Leo Chenal has been so good for the Badgers this season. The pass rush upside plus the stack and shed ability at the second level allows him to wreak havoc in both the running and passing games.

I’ll be keeping an eye on him against Nebraska today. pic.twitter.com/xQ8uwpFFxQ

LB #57 Jack Sanborn is another Badgers defender to keep an eye on in this one as well as CB #1 Faion Hicks. On offense, look out for TE #84 Jake Ferguson. The 6’5, 244lb senior has been a go-to option in the Wisconsin passing game the last few seasons, being a reliable chain mover as well as a good target in the red zone. He can continue to add size and strength to hold up as a blocker at the next level, but Ferguson should be a solid depth player in the later rounds.

Jake Ferguson (@jqfergy11) is an underrated tight end in the #B1G. He has strong hands, and is a great downfield blocker. He has become Jack Ferguson's go to target in third down.#WNSFilm pic.twitter.com/35fOfUmqo8

For the Sun Devils, RB #3 Rachaad White has already decided to opt out of the bowl game. OG #61 Dohnovan West also won’t play in the bowl game after cleaning up his knee prior to the pre-draft process, However LT #74 Kellen Diesch will play and should be a name to watch. The 6’7, 300lb senior has great length and the experience in the trenches you like to see in an offensive lineman.  He does well in pass protection, keeping pass rushers out of the pocket and has room to build on the work he does as a run blocker. An East-West Shrine Bowl invite, Diesch is a name to remember this spring.

Kellen Diesch (@_kell89) of @ASUFootball is among the best pass blocking OTs in the country.

His ability (LT#74) to stonewall speed edge rushers and strong-handed inside penetrators makes him as NFL ready as any tackles in the country. #ShrineBowl #ArizonaState pic.twitter.com/GRRG3HRL2S

Other names to tune in to watch for the Sun Devils include LB #8 Merlin Robertson, DB #0 Jack Jones, and DB #24 Chase Lucas.