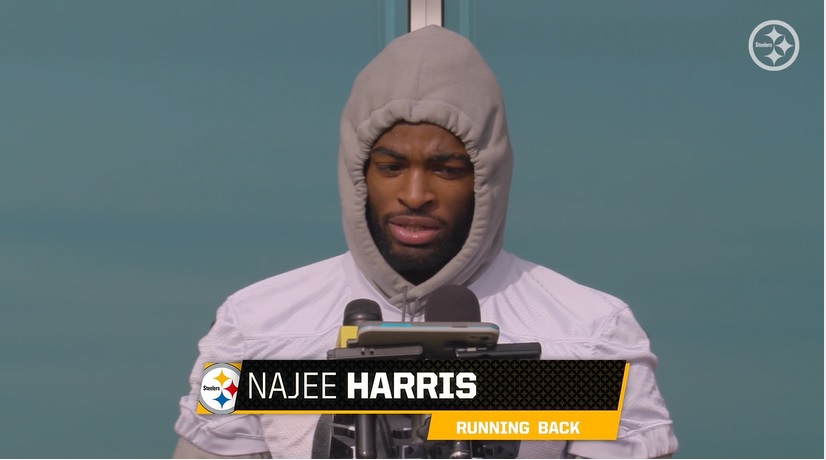 In college, Najee Harris was used to busting big runs. Not gamebreakers, not 60+ yarders, but consistently healthy runs. He’s looking for that and more this weekend against the Kansas City Chiefs’ defense, telling RBs Coach Eddie Faulkner to help him hit one of those explosive plays. Speaking to reporters Friday, Harris said he texted his coach about it.

“We’re just not there yet,” Harris told reporters about achieving longer runs. “But we’re gonna get there. It just takes time. I just texted [Coach Faulkner] yesterday and was like, ‘man, I need a big run.’ But it comes in time. Just can’t be too eager to do it.”

As we wrote yesterday, the Steelers have struggled to rip off long runs this season. They have just six of 20+ yards, half of them coming from guys not named Harris. Mason Rudolph, Chase Claypool, and Diontae Johnson are responsible for the team’s three longest runs of the season. That isn’t exactly how Team President Art Rooney II envisioned “fixing the running game.”

Harris’ longest run this season checks in at 23 yards, coming in Week 14 against a soft Minnesota Vikings’ second half defense playing two-high and giving up the run. He has a pair of 20-yard runs on the year, both coming over the first five weeks of the season. Since Week 6, just one run has gone for longer than 20 yards. That comes out to 0.6% of his carries. In fact, since Week 6, his longest runs have been that 23 yarder followed up by a couple of 13 yarders.

It’s a stark difference from what Harris was able to do at Alabama, and one reason why his average is so poor sitting at 3.6 YPC. He’s on pace to have the lowest YPC of a rookie running back with 250+ carries since fellow Alabama alum Trent Richardson, who averaged 3.56 yards per carry in 2012 with the Cleveland Browns. He’d become just the fourth rookie to ever hit that lowly mark, joining Richardson, Ricky Williams in 1999, and Errict Rhett in 1994.

Busting off a couple of long runs does an average a lot of good. Getting four or five yards on every single carry is tough for even the best backs in football, and that doesn’t even consider short-yardage or goal line runs when maintaining a healthy average is impossible. You can’t get 4.5 yards on second and goal from the two. Harris’ lack of big plays is an anchor on that average, and until that changes, his numbers will look poor.

Of course, that is far from being entirely Harris’ fault. He’s running behind a rebuilt – and still, frankly, rebuilding – offensive line, and the yards he’s gained this season have all been earned. He’s proven himself to be a reliable catcher, an improved blocker, and a workhorse runner in an era where those guys have become unicorns. By no means has Harris had a bad season.

But his season, and this Steelers’ run game, would look a lot rosier if he can bust off a season-long run over these next couple of weeks. The Kansas City Chiefs are allowing 4.7 yards per carry but have generally been adequate at preventing long runs, just seven of 20+ yards on the year. Four of those were given up to the Baltimore Ravens in Week 2. Since Halloween, the Chiefs have allowed just two of them.