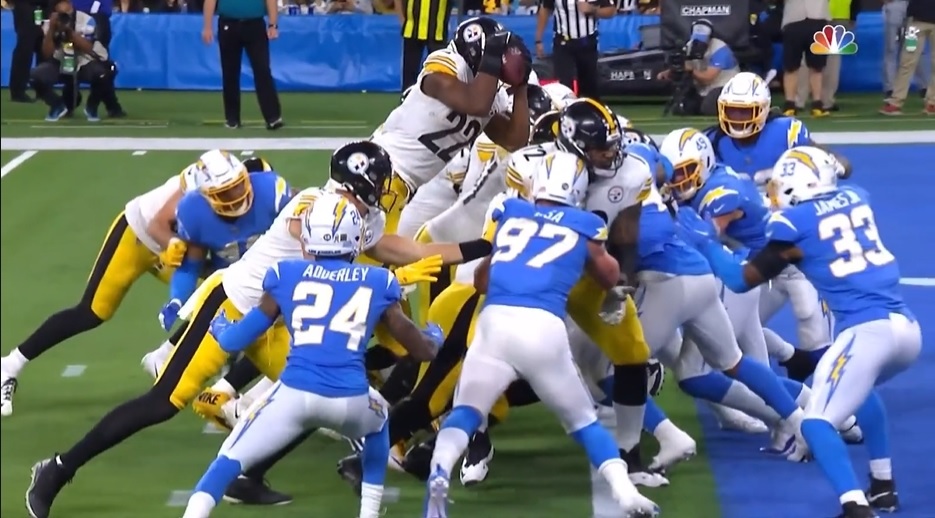 Najee Harris has been a workhorse back for the Pittsburgh Steelers this season. Maybe even more than expected. After playing for college football’s best team in Alabama, every yard he’s gained this season has been earned. He’s had to experience difficult games where the offense could do little right, getting blown out, and overcoming losing streaks. But Harris has taken the same approach game-by-game. In a Friday Zoom call with reporters, he explained his mentality to never quit.

“It’s part of the sport,” he said in audio provided by the team. “Not everything’s gonna go your way especially in the NFL. You gotta be more than just a player, I guess, offensively. You just gotta be a complete player as in yeah, you might be catching the ball, receiving, running through the through holes, scoring touchdowns. A complete player, I feel like it’s even doing little extra things. Finishing the plays.”

Harris has grinded out third and short conversions, routinely turning nothing into something. Against Minnesota, he spun his way to a first down on third and two when the Vikings had him dead to rights in the backfield. Rarely does one man bring down Harris and his ability to create yards after contact has been vital for an offense still struggling to open consistent lanes.

One of his top effort plays of the season came without him touching the football. Harris tracked down Bengals’ CB Eli Apple for a touchdown-saving tackle, running across the field to make the play. Compare that to WR Diontae Johnson, standing in a similar spot, who made no attempt to chase after the ball.

Good effort play by Najee Harris after Roethlisberger's first INT. Comes across the field to make the tackle, save a TD, and Steelers' D holds Bengals to a FG.

Harris spoke about that play to reporters.

“The interception with the Bengals. For me to come down there and tackle the guy when he would’ve scored a touchdown, that’s seven points that they did not score because…I stopped him. Our defense stopped them to three points and that could be the difference of the game. Especially in the NFL, it’s so close and anything could happen. It’s just those little points that you think don’t matter. It matters a lot. And I mean, I feel like we need more of that on this team, to be honest.”

Harris’ last line “we need more of that on this team” is noticeable. Players and coaches have preached better effort and consistency on both sides of the ball. For a Steelers’ team in do-or-die, needing to win at least three of their final four games to have a chance for the postseason, effort can’t be a problem the rest of the way. At least there’s no questions about Harris’ commitment.