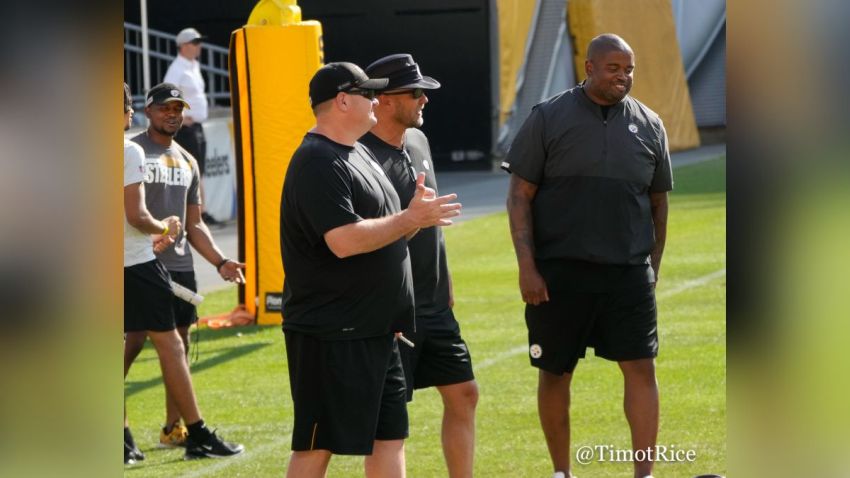 Yesterday, the Pittsburgh Steelers announced Adrian Klemm would be leaving for his new Oregon job effective immediately as opposed to waiting until after the Steelers’ season ended. It was a rare move in the Steelers’ organization, seeing a coach leave in the middle of the season to take another job, much less a job in the college game.

Klemm will be replaced by assistant Chris Morgan, and during his Tuesday press conference, Mike Tomlin explained why he allowed Klemm to leave in-season, and why he’s excited to give Morgan the chance to lead the group.

“We released a statement yesterday regarding Adrian Klemm and his departure to go to Oregon,” Tomlin said in a press conference aired on the team’s YouTube channel. “Let me start by saying I’m so appreciative of his efforts. The landscape that is coaching is changing each and every year. We see it, decisions are being made earlier in the processes. Colleges, the processes are happening faster, people are making hires and so forth. The financial component in our business is making college football much more competitive. And so we’re all getting faced with challenges that we really weren’t faced with in the past. And so we made the decision, I made the decision, to allow Klemm to move on to Oregon.”

Klemm will be the Ducks’ new O-line coach along with carrying the title of assistant head coach, which almost certainly meant an additional increase to his pay. It’s unclear if he’s making more money at Oregon than he was with the Steelers, but Tomlin’s comment about financial considerations seems to indicate Klemm is getting a raise to leave. He made $760,000 his final year at UCLA.

Klemm had been regarded as a quality college coach who only left after a scandal at UCLA for unpermitted benefits to a pair or recruits. He spent three years with the Steelers, two as an assistant before being promoted to head O-line coach this offseason. His tenure lasts just 15 games, one of the shortest in recent history.

Stepping into the lead role will be Chris Morgan, hired in early February to be the team’s assistant. He served as the Atlanta Falcons’ head offensive line coach from 2015 to 2020, implementing a zone-blocking scheme under Kyle Shanahan and the Shanahan/Alex Gibbs coaching tree. He was let go when the Falcons uprooted their staff under new head coach Arthur Smith.

Tomlin said making the move now is a great chance to evaluate Morgan’s ability to lead the group this season and beyond. He’ll one of the candidates to be the permanent O-line coach for 2022.

“It provides tremendous clarity for us as we zero in on the last component of this season. It also gives me an opportunity to evaluate [Morgan] who will be an, who will get an opportunity to be elevated in his role. [Morgan] is very credible. He was a lead line coach in Atlanta Falcons for a number of years before he got here. He’s also had the unique perspective of being in the support capacity throughout the 2021 season, but also having intimate enough relationships with what’s going on in the staff and among the players. I’m really excited about his elevation and the component that it could bring to us.”

Pittsburgh is likely to interview out-of-house candidates for the O-line job in the offseason, just as they did with Klemm before promoting him. But Morgan should be considered a favorite given his NFL experience and time already spent with the Steelers. Tomlin confirmed he’ll be a candidate this winter.

“He’ll be a candidate for the job and what better way to see what he’s capable of than to allow him to do the job for the remaining portions of the season.””

Though he’ll be viewed as just another in-house hire, he’s been with the team for only nine months. A different scenario than say, Randy Fichtner or Keith Butler biding their time before being elevated, or even Klemm’s situation, an assistant for two years before his promotion.

Another benefit of making the move now was cutting out any noise or question over leadership and direction. On paper, the optics of a coach with a foot out the door, his new job already lined up, didn’t look good.

“I think the move also eliminates the potential of any questions regarding distractions and so forth. And let me be clear, I had no reservations about Klemm’s commitment and his willingness to work in detail. But it’s the potential perception that you want to combat, whether it’s inside or outside. We want to eliminate any potential questions that may occur in that regard even before they develop.

“This is a critical stage of season for us. This is a critical week. The road is extremely narrow. We’re circling the wagons and that’s just one of the ways I thought it would be appropriate to do so in an effort to engineer victory this week and get singularly collectively, professionally focused and from a perception standpoint as well.”

Morgan will look to improve a struggling offensive line over the final two games against two good front sevens in the Browns and Ravens. Of course, Morgan has been part of the staff trying to get this front five in the right direction all season long. The results, at best, have been mixed, with the interior offensive line especially struggling.