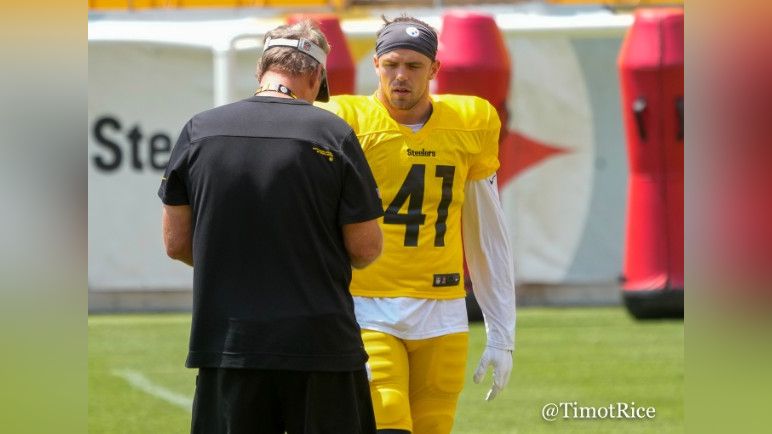 The Steelers linebackers have gone through ups-and-downs throughout the 2021 season, much like the rest of the team. Devin Bush has had problems after his ACL surgery. Joe Schobert has provided leadership and experience, but hasn’t been the Pro Bowl guy he was a few years back.

Robert Spillane has been the team’s primary backup at the inside position for most of the season. No one seems to have been a bigger supporter of his than defensive coordinator Keith Butler. Butler’s particularly infatuated with Spillane’s old-school physical style.

“He does all the time, you know it’s what he does,” Butler said via team-provided audio on Spillane playing more last week after not much playing time lately. “We played Tennessee the time before and I ain’t seen Henry get jacked up like that. He does a good job for us.”

Butler’s of course speaking of the 2020 play in which Spillane met Henry head on. That was the “coming out party” for Spillane in terms of recognition from Steeler fans.

His strength remains in the running game, which is enough to warrant him playing time with Bush’s disappointing play. He brings a physicality that not many others on the team do.

Robert Spillane: Run Defense Fundamentals Come Down To ‘Being Able To Whoop A Man’s Ass’

Spillane is scheduled to be a restricted free agent after the 2021 season, as he was signed to a one-year, $850,000 deal before the season. Regardless of your opinion on his play, that’s not bad value for a guy that sees the field as much as he does.

With Bush on the COVID-19 list in Week 16, Spillane was on the field for 96% of the Steelers’ defensive snaps. With the future of the linebacking core in limbo, it wouldn’t be a surprise to see him back in black and gold in 2022.