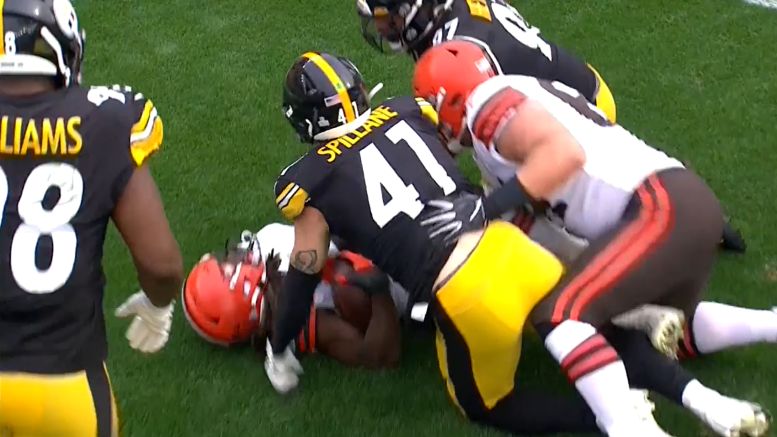 If you could pinpoint one single problem that was the biggest source of the Pittsburgh Steelers’ failures this season, I’m guessing that quite a number of people would highlight the run defense. They rank dead last in that category, after all, which isn’t exactly the sort of football that the team has been known for.

‘Run the ball and stop the run’ is what they used to live by. Now they can’t do a whole lot of either, though there are occasions during which they can get just enough out of their run game thanks to the individual talents of rookie running back Najee Harris.

As it concerns the run defense, however, at this point, they’re seemingly just content if they can keep it under 150 yards or under four yards per carry. By that measure, they actually did better against the Kansas City Chiefs than they have against most teams this year. But why is it that the run defense has been so bad this year?

“Coach Tomlin always says it best in the run game. It’s all about getting off blocks and making tackles”, inside linebacker Robert Spillane said, who started for Devin Bush due to a positive COVID-19 test. “It’s the fundamental principles of run defense. Staying in your gap, staying square, being able to fall back and make plays as an inside linebacker”.

Spillane led the team with 13 tackles during the game, including four stops, tied for the most ‘stops’ on the team along with Cameron Heyward. Fellow inside linebacker Joe Schobert also contributed three stops amongst his 10 tackles.

“It really just comes back to the basics and fundamentals being able to whoop a man’s ass who’s in front of you, is the terminology we use, and then make a play. I think we just need to get back to that, myself individually and collectively as a team, and good things will happen”.

Unfortunately, the Steelers haven’t done a whole lot of ass-whooping this year, outside of the likes of T.J. Watt, though even he has proven himself mortal in 2021 as he battles a string of unrelated injuries that have robbed him of a good deal of quality playing time, but not enough to prevent him from leading the league in sacks.

Pittsburgh has two of the best rushing teams in the NFL to finish off the season, and both of them are divisional opponents. Up first is the Cleveland Browns and Nick Chubb, easily one of the top backs in the game, who is once again in the Pro Bowl with 1,143 yards on 207 carries and eight touchdowns in 12 games.

Then it’s the Baltimore Ravens, who have pieced together a top-five rushing offense despite losing three of their top four running backs in the preseason—the top back being quarterback Lamar Jackson himself, who should be his old self coming off of an ankle injury in time for that season finale.