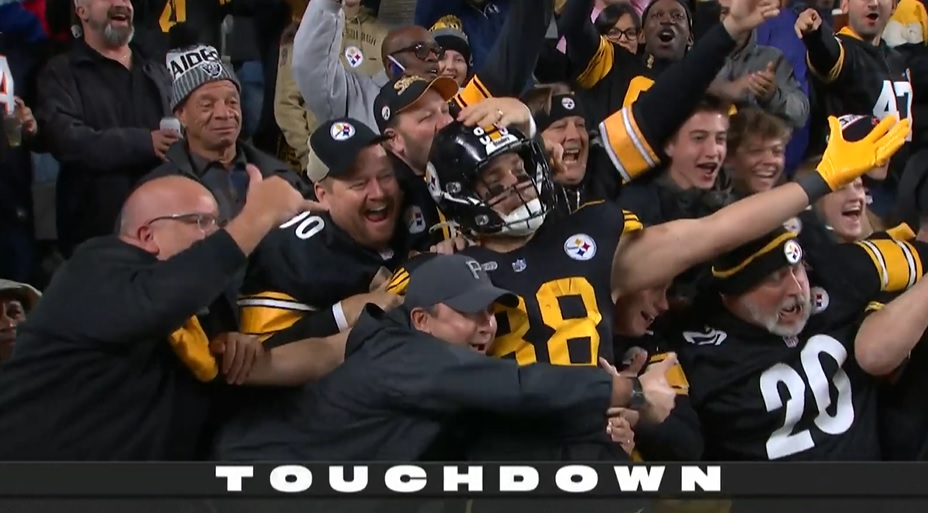 A tight end is a quarterback’s best friend. Ben Roethlisberger and Pat Freiermuth are quickly becoming BFF’s. Freiermuth has played an important role in the Pittsburgh Steelers’ offense this season, counted on even more following JuJu Smith-Schuster’s season-ending shoulder injury. It’s rare for a rookie to earn a veteran quarterback’s trust but speaking to reporters Friday, Freiermuth said his chemistry with Roethlisberger has grown by leaps and bounds.

“Ben and I’s relationship has grown immensely throughout the whole season,” he said in audio provided by the team. “Game in and game out and practicing and stuff like that. We’ve developed a comfort level with each other.”

Freiermuth’s numbers have been strong for a rookie tight end. His opportunity for playing time has expanded thanks to Smith-Schuster’s and Eric Ebron’s injuries but he’s largely earned his expanding role. On the season, he’s caught 45 passes for 386 yards and seven touchdowns, the latter number tying the franchise mark by a rookie tight end first set by Eric Green in 1990. His 60 targets are fourth on the team, an impressive number for a guy who has played just 61% of the offense’s snaps in 2021.

Roethlisberger’s trust in him began to be built up in the summer. Throughout camp, Freiermuth caught everything, registering the highest catch percentage of any player we’ve ever tracked in camp. He didn’t record a single drop and made several contested catches, proving his scouting report correct of a sure-handed receiver. That’s generally been proven true throughout the regular season although Week 14’s game-ending incompletion against Minnesota was a missed opportunity.

Still, Freiermuth has adjusted to the NFL quicker than most tight ends do. He’s set to join the 50/500/5 club by season’s end, already sitting at seven touchdowns and 45 receptions while on pace to finish the year with 503 yards. That puts him in an exclusive Steelers’ club accomplished by only a handful of players and would make him only the fourth rookie tight end since 2000 to have that kind of season. He’d join John Carlson, Tim Wright, and Evan Engram, not exactly a whos-who list of names but quirky all the same.

Freiermuth spoke to what’s made the adjustment easier on him.

“The game’s also slowing down for me. I’ve seen a lot of the coverages and ways NFL defenses attack offenses. Slowing down and the chemistry I’ve built with the offense and staff.”

Freiermuth has proved his second round investment and has every bit the look of a long-term, quality starter at tight end. That’ll be just as important next season with likely a new QB under center whether that’s a new veteran or a rookie.