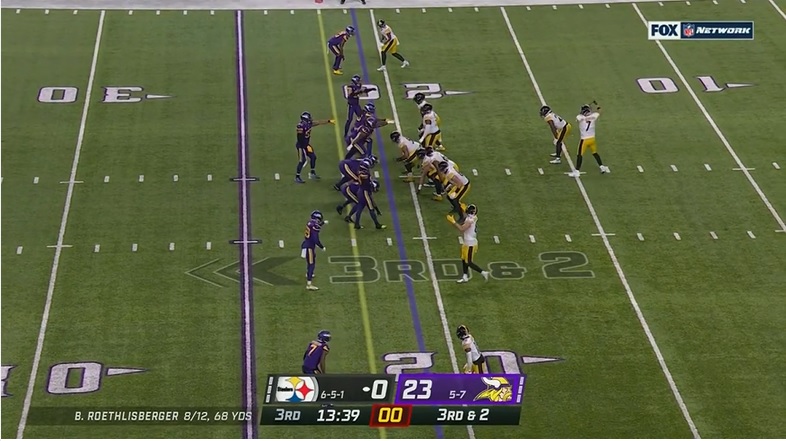 But at an even more basic level than that, and I know, all that stuff I mentioned is foundational, the Pittsburgh Steelers struggled. At least three times in Week 14, the team couldn’t even snap the ball. No doubt crowd noise played a key role, especially in a dome where sound is amplified even more, but it was an unacceptable level of inaction.

The first I suppose is the least costly though it doesn’t make it much easier to watch. 3rd and 9, end of the third quarter. Steelers trying to get their comeback really going. Pittsburgh working on a silent count here so the count is done via Trai Turner’s tap and other non-verbal cues.

Roethlisberger lifts his leg, claps his hands, and Green turns his head back to Roethlisberger. Turner taps Green who then gets his head around but still doesn’t snap the ball. Turner taps him again as Roethlisberger is furiously trying to get the ball snapped with the play clock winding down. It takes Green roughly seven seconds to snap it, and it doesn’t come until after the refs blow the play dead.

The only saving grace here was the Vikings were actually called for a neutral zone infraction. Minnesota was so sure the snap had to be coming based on Roethlisberger’s body language that they mistimed their blitz. You can see Roethlisberger’s frustration after the snap, smacking the ball back into the ground, and then talking with Green after the play (which isn’t shown in the clip below).

If you’re feeling charitable, perhaps Trai Turner could’ve tapped him sooner. He stood up to communicate with RT Chukwuma Okorafor, who looked back at Roethlisberger against the Vikings’ pressure-heavy look. But Green still has literal seconds to snap the ball after Turner taps him and after he looked back at Roethlisberger clapping for the football (and at this point, probably yelling too), and just doesn’t do it.

Unfortunately, that wasn’t the only mistake. Here is a much more costly one. 3rd and 1 for the Steelers, good chance to convert. Again, Turner taps Green and again Green does not snap it despite Roethlisberger’s animated clapping. There are times where the snap won’t come immediately after the tap; you don’t want defenses to get comfortable with the silent snap count. But Green never hikes the ball. The play clock is hitting zero, Turner is tapping Green again and false starting, and Roethlisberger is trying to call timeout. It’s a mess.

Ultimately, Turner is flagged for the false start.

The fallout here is what really frustrates me. 3rd and 1 becomes 3rd and 6. That allows Minnesota to bring their pressure/blitz looks, and Sheldon Richardson rushes in unblocked to sack Roethlisberger. Pittsburgh punts from their eight and Pressley Harvin only gets 26 net yards out of it, setting the Vikings up at the Steelers’ 34. They only need one first down, get into field goal range, and go up 26-0.

To recap, the Steelers go from 3rd and 1 to punting and giving the Vikings tremendous field position to easily add to their lead.

Last one we’ll look at. Same story. Roethlisberger did make a late fourth down check, and he is rushing to get the snap off. Turner taps him and Green takes too much time to shotgun the football back. Delay of game, turning 4th and 3 the Steelers were going for into 4th and 8, where they’re forced to punt. Green just doesn’t have good awareness or urgency here.

Minnesota chewed up four minutes off the clock. Pittsburgh went from having the ball with nine minutes left until getting it with five minutes remaining. Precious moments off the clock as the Steelers tried to make their comeback.

None of this even takes into account some of the poor snaps Green had in this game when he did fire the football. He certainly made Roethlisberger work hard for a lot of snaps in this one (to be fair, Roethlisberger also had one go through his hands).

It’s certainly been a difficult rookie season for Green. In pockets, you can see why they drafted him with his torque and athleticism and finish. Context is important, too. He’s an underclassmen who didn’t play much center at Illinois. But it’s impossible to feel good about where he’s at right now as a short or long-term option for this team. Hoping to see improvement over the final four weeks.