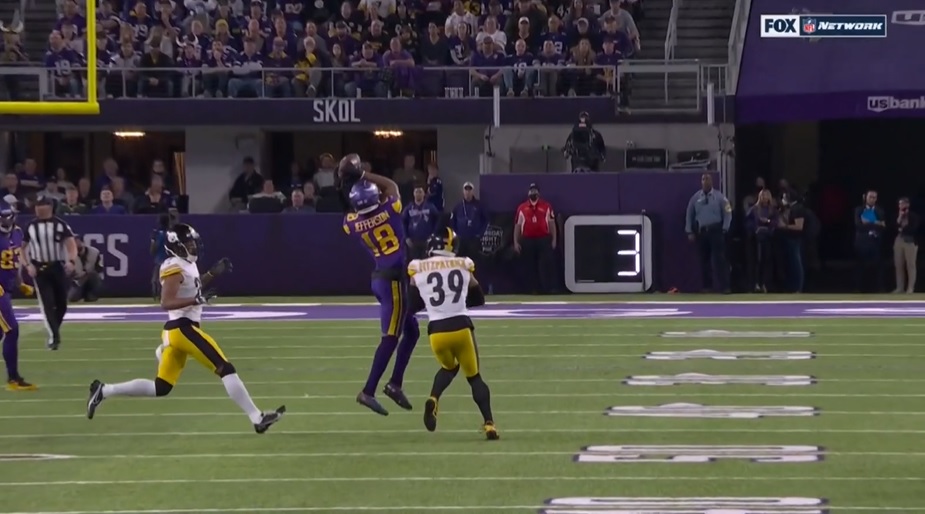 Anyone who was part of or watched a bad high school football team knows the guy I’m talking about. The one dude with legitimate talent on an otherwise overmatched roster. The one player getting D-I looks and offers while everyone else is off to go become an accountant. In Sunday’s loss against the Minnesota Vikings, Fitzpatrick was that guy. For large chunks of the game, especially in that disasterous first half, Fitzpatrick was the only one bringing it. He bailed out the failures in front of him time and time again, making open field tackles and plays in coverage Thursday night. The best guy on a bad defense.

Let’s take a look. We’ll break it down into two categories, tackling and coverage.

It’s true Fitzpatrick’s missed tackle rate had risen slightly from 2020 to 2021, 12.9% to 16.3%. But Fitzpatrick has so often this year been asked to make tackles at the third level in space against runners who have a full head of steam. Naturally, that lends itself to missing more tackles. But Fitzpatrick shut down Dalvin Cook in open grass Thursday.

His first solo tackle came on the final play in the first quarter. Cook bursts untouched into the open field, but Fitzpatrick is able to take the correct angle from his FS spot, break down in space, and make a solid, wrap-up tackle for just a yard or two after contact. I’ll show it from the aerial view so you can focus on Fitzpatrick and not the other issues (we’ll address that in the coming days, promise) and the path Fitzpatrick took on Cook.

Fitzpatrick was tested almost immediately, the second play of the following drive. Cook again untouched into open grass. Cutting to his left with a chance to find the edge and probably score, Fitzpatrick shuts it down with a diving tackle to grab and wrap him up.

Check out Fitzpatrick’s reaction after the play. He’s not amped up that he made the tackle, he’s heated that Cook kept breaking free into the open field. It’s rare to see Fitzpatrick that animated in a negative way. But his anger was deserved. The front seven’s play was unacceptable.

Fitzpatrick is up to 88 tackles in 12 starts. A year ago, he had 79 tackles in 16 starts. So Fitzpatrick has already surpassed his 2020 total with four games to go, the clearest sign how many tackles he’s been forced to make this year. It’s never a good sign when your FS will end the season well over 100 tackles. Specifically in the run game, Fitzpatrick has 47 tackles this season, 31 of them solo. All of last year, he had 44 tackles, 29 of them solo. So he’s beaten those numbers too. Means the guys up front aren’t getting off blocks and doing their job.

Fitzpatrick excelled in coverage Thursday. Officially, he was targeted twice, forcing the incompletion on both occasions. Each one came on third down in the fourth quarter. The first came on this third down pass intended for Justin Jefferson. Fitzpatrick times his hit well and separates player from ball with a clean, hard hit. Shoulder-to-shoulder as Jefferson reaches up for the pass. Creates the incompletion and the punt.

The other came in the game’s biggest spot. Steelers down eight with 2:30 left, the Vikings facing 3rd and 8. If Minnesota converts, the game will essentially be over. Fitzpatrick is over slot replacing Arthur Maulet on the nickel blitz. WR K.J. Osborn runs an out route to the sideline. Fitzpatrick is able to match and squeeze the throw, forcing it wide and outside (Maulet’s pressure helped, too).

It’s such a tough route for Fitzpatrick to cover because he’s flat-footed and forced to defend anything. In-breaking, out-breaking, vertical, any route that Osborn runs, he has to match. And he did. The officials initially threw a flag but realized their mistake and picked it up.

Unfortunately, they didn’t recognize their missed call earlier in the game. Fitzpatrick was targeted a third time and put a big shot into ?? to separate player from ball on a textbook, legal hit. Despite the ref standing right behind them with a clear view on the play, Fitzpatrick was flagged for an illegal hit. A completely missed call that luckily didn’t hurt Pittsburgh. The defense held and the Vikings still settled for a field goal.

He might be a little biased but he’s also correct. Joe Haden knows it was a horrible call.

GREAT PLAY @minkfitz_21!! This is football! We have to be able to make this play as DBs. Clean hit https://t.co/ao9tfwk8WU

While the interception numbers haven’t been there, just two this season, Fitzpatrick has played 95% like his typical self since the first two weeks of the year. Over that span, the team tinkered with moving him around in the slot and playing his less traditional role while they figured out what they had in guys like Arthur Maulet and Tre Norwood. Fitzpatrick has otherwise been excellent, even if the box score stats don’t directly reflect it like past seasons. Thursday was a great example of that.