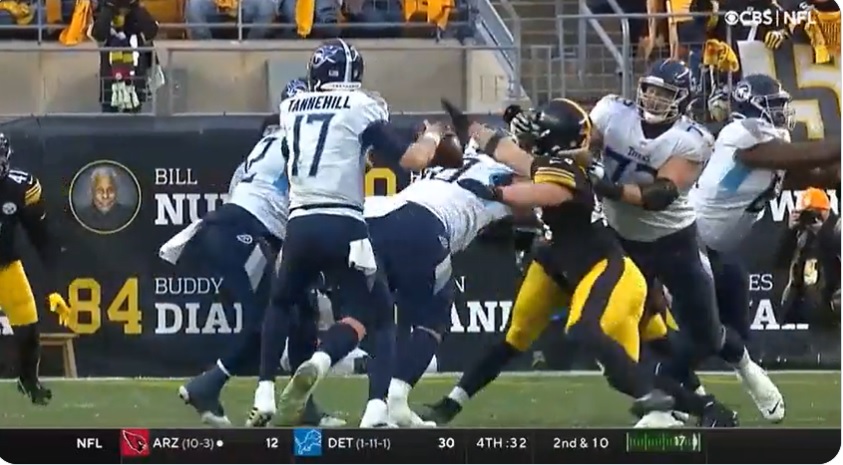 Derrek Tuszka’s first NFL sack not only meant a lot to him, but meant a lot to the Pittsburgh Steelers getting the win Sunday over the Tennessee Titans. Tuszka came up large in a key moment, knocking the ball out of Ryan Tannehill’s hands on the Titans’ final drive of the game. Though Tennessee recovered, it put them in 3rd and 15, setting up Joe Haden’s fourth down stop.

Speaking to reporters Thursday, Tuszka described what that moment meant to him.

“It meant a lot,” he said via Steelers.com. “That first one always does. It was kind of a critical part of the game. T.J. took a shot, so he had to come out quick. So it was nice being able to step in there and, and not lose a beat..”

Watt had left the snap before after getting crunched by a Titans’ offensive lineman. Tuszka made his biggest impact play of the season, beating the RT (despite getting held and grabbed by the facemask) to knock the ball out.

Kudos to Derrek Tuszka. Registered his first NFL sack yesterday. And it was a big one. Fought through a hold for a strip/sack on the Titans' final drive, putting them into 3rd and 15 that led to Joe Haden's 4th down stop. #Steelers pic.twitter.com/8AJvSYo2u5

It was Tuszka’s first sack since January 11th, 2020 in his final college game at North Dakota State, registering a sack against James Madison. Tuszka had an impressive college career, recording 13.5 sacks as a senior. He spent his rookie year with the Denver Broncos before the Steelers signed him to the practice squad September 1st. Tuszka was promoted later that month after injuries hit the EDGE position hard. The Steelers began this season with Melvin Ingram and Jamir Jones as their backup outside linebackers. Today, Ingram and Jones are gone, with Tuszka and Taco Charlton the team’s backups.

Tuszka’s impact defensively has been minimal this season, but that play on Tannehill was a big one, and well-timed for his first NFL sack. And Tuszka was ready to step in at a moment’s notice.

“Just a mindset. Just always staying locked in throughout the game during the week, everything leading up to then. That way if something does happen, I can step in and there isn’t a bump at all in the road.”

Tuszka described how he rotates in with T.J. Watt.

“It’s just kinda how he’s feeling. Sometimes he’s feeling good, but we want to give him a couple reps to take an extra breather. Like I said, I just gotta be locked in because he might look over at me and say, ‘Hey, I need one quick.'”

Tuszka and Charlton made key plays in Sunday’s win. Tuszka had the forced fumble, while Charlton tipped a pass that led to Joe Schobert’s interception, one of four turnovers Pittsburgh’s defense had in the win.