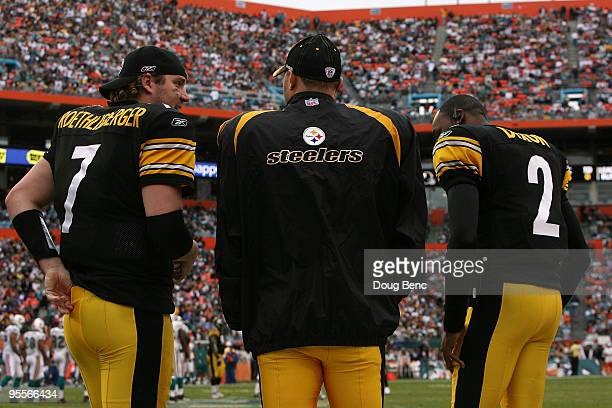 “I’ve been around him nine of the eleven years that I played with the Steelers,” he said via NFL.com. “I sat next to him. I know how hard he’s worked to get to this point. And now he’s in his 18th year. And you see everything that he’s going through, man. However it unfolds, however he decides to go out, man, he deserves it. Because he’s done a lot for the Steelers, for the Pittsburgh Steelers and Steelers’ Nation. And everybody is there to support him along with myself and I love him to death.”

A hometown kid from Homestead, PA, Batch signed with the Steelers in 2002, coming over from Detroit where Kevin Colbert worked before taking the job with Pittsburgh. Batch served as the team’s backup the first three years, never starting a game over that span, but was supposed to be veteran insurance when the team drafted Ben Roethlisberger 11th overall in the 2004 draft. That year, Tommy Maddox was the starter with Batch serving as the #2. But Batch got hurt and then Maddox went down early in the season, paving the way for Roethlisberger to play. The rest, as they say, is history.

Batch had a long NFL career, making spot starts for the Steelers. And though he certainly didn’t play as many games as Roethlisberger, Batch did play until he was 38 so he has as good of an idea of what a quarterback’s body as old as Roethlisberger feels like. He told Sicliano he does not know what Roethlisberger’s plans are after the season but based on what happened in the wake of the Ravens’ win, suspects 2021 will be his last.

“When I look at Mike Tomlin being around him in the manner that I have, he does not hand out game balls like Tic Tacs. So Ben was able to get the game ball immediately after the Baltimore game, that kind of tells me maybe this could be possibly the last game that he played against the Ravens at Heinz Field.”

Overall, Roethlisberger has played well this season and rallied Pittsburgh back from a 29-point deficit Thursday. He finished the game with over 300 yards and three touchdowns, nearly throwing a fourth on the final play of the game, a perfect throw Pat Freiermuth could not come up with.