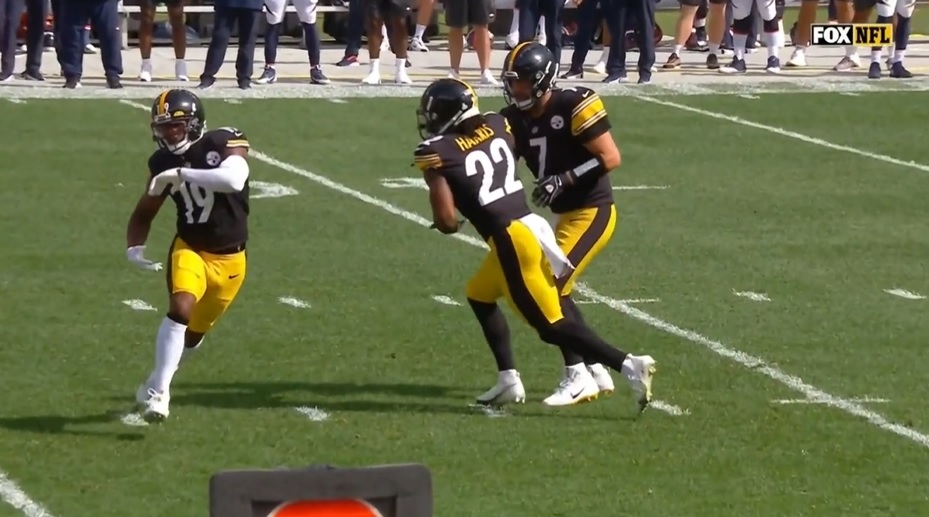 Coming out of the University of Alabama as the top running back in the 2021 NFL Draft class, it was well-known that current Pittsburgh Steelers’ rookie running back Najee Harris was a high football IQ guy, who was incredibly smart and thoughtful off the field.

Getting to know him further and gaining more experience in the thick of things through eight games though has really opened Steelers’ veteran right guard Trai Turner’s eyes to just how smart, nuanced and detail-oriented the standout running back truly is week-in, week-out.

Speaking with reporters Friday ahead of the Week 9 Monday Night Football matchup with the Chicago Bears, Turner praised Harris’s ability to be detail-oriented and understanding of what the offensive line is looking to do on certain plays, which has helped unlocked a consistent rushing attack in Pittsburgh.

It certainly helped when Harris called himself out a few weeks ago about missing holes and not helping the offensive line out enough, but as time has gone on, Harris is really showing Turner some things he hasn’t seen from running backs he’s worked with in the past.

“He’s smart, man. He’s a smart player able to call out himself when he needs to do better,” Turner said to reporters Friday, according to video from Steelers.com. “And he don’t mind coming to you saying, ‘Hey, what you’re thinking about this, or what you see with that?’ Something that I hadn’t really noticed too much amongst young backs that I’ve been around to actually give his input about certain things that he played in, not so much in the game plan, but so much of how we have certain runs of how we fit those runs and maybe what I’m thinking on certain blocks and compared to what he’s thinking.

“…It’s the small details, the nuances of a certain play,” Turner added. “It’s not just so happened that a play pops by chances. It’s a reason that the play’s there, that’s why it did. I think now, until — what is this week? Eight, Week Nine or so, — we’re getting to the point where now it’s not just about getting on assignments. It’s about getting on assignments and how are you fitting those assignments? What are you doing after you get contact and stuff? Getting to the smaller details and nuances of things, and I think that’s just phenomenal for him to be a rookie and able to talk about some of those characteristics of the game plan.”

It shouldn’t come as much of a surprise that Harris is this involved and is this forthcoming with his offensive linemen when it comes to the product on the field. He was always praised by Alabama head coach Nick Saban for his smarts and true understanding of the schemes at Alabama during his time at the football factory in Tuscaloosa.

That said, it’s great to hear just how involved Harris is and how confident and comfortable he feels in the Steelers’ system to voice his thoughts on certain plays, blocking schemes and more to veteran offensive lineman.

I’ve said it before and I’ll keep saying it: the Steelers got themselves a special talent and a special person in Harris. The offense will be better off with him moving forward, running backs in the first round be damned.