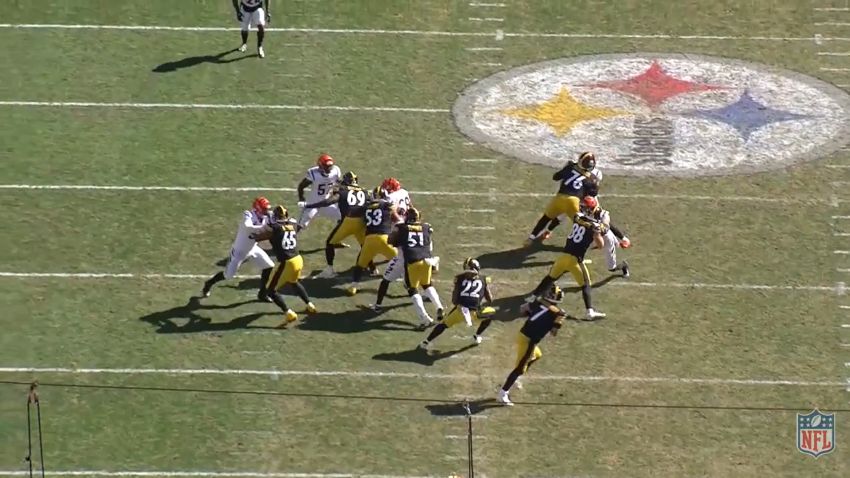 When you are the worst in the entire industry in one particular area, you can rest assured that there is a multitude of factors contributing to that extreme negativity. The Pittsburgh Steelers have the worst rushing game in the NFL. While the offensive line has been a significant hindrance, however, you can count numerous other factors at play as well.

One subject that has come up a couple of times this week is the role that first-round rookie running back Najee Harris has played in the failures of the running game. Head coach Mike Tomlin was asked on Tuesday about the fact that his back has been hit in the backfield more than anybody else in the league, and whether that was all on the offensive line, or if Harris also shared some blame in that.

“He has missed a hole or two as well, and he would admit that”, Tomlin said. “In some instances, the holes aren’t there. In some instances, the holes are there, and he runs through them, but a penalty brings the thing back. We can talk around this, and we have, and I’m open to continue, but I’ll continue to answer in the same manner that I’ve been because that’s the truth as I see it”.

While there haven’t been a lot of holes opened up so far this year on Harris’ 40 carries, that makes the holes that he does miss even more significant, and he has certainly left some yardage on the field, surely for a variety of reasons, something that he acknowledged earlier today.

“There’s some I’ve missed, obviously”, he said, speaking to reporters. “Just need to get better at it. I’ve just got to do better at it every day, and getting a feel for the line and how they’re blocking, stuff like that”.

Any running back is going to miss a hole here and there. A rookie running back playing behind a makeshift offensive line is a breeding ground for missed opportunities. You do have to get a certain feel for how plays tend to develop in front of you, especially when they’re not consistently developing the way they’re designed.

It is not a particularly long-term concern if Harris is failing to hit a couple of holes that are available per game. The more he plays, and the more the line grows, the less frequently that will occur. And with each passing game, there is more film for him to look back on and see what he’s missing.