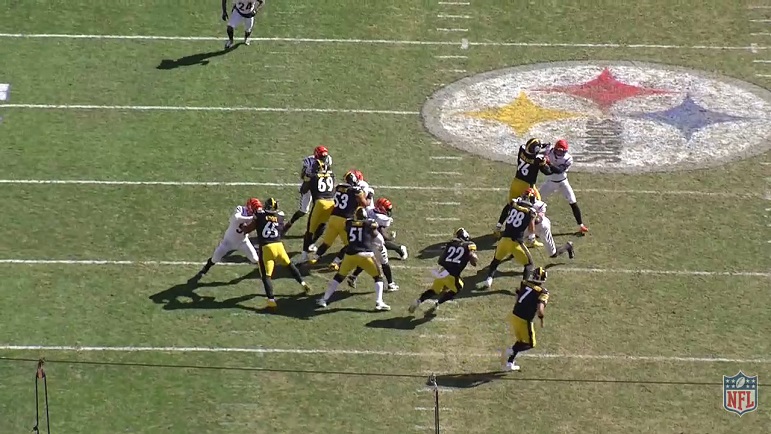 The Pittsburgh Steelers offensive running game has been pretty much nonexistent so far in their first three games of the 2021 NFL regular season. In fact, just 13 of 40 (32.5%) runs so far this season by Steelers rookie running back Najee Harris have been successful. Oh, and just five of those 13 successful runs were him picking up just 2 yards to qualify a success based on down and distance. To make matters worse, Pro Football Focus reports that Harris has been hit at or behind the line of scrimmage on 70% of his carries so far this season, the highest rate in the NFL entering Week 4.

On Tuesday, Steelers head coach Mike Tomlin talked quite a bit about the Steelers offensive problems so far this season and that includes him fielding some questions about how lousy the running game has been as well. At one point during his Tuesday press conference, Tomlin was asked about the stat related to Harris being hit at or behind the line of scrimmage so far this season and if he could maybe explain the reason for that happening so often.

“I don’t have the percentages, but, like I mentioned, we’re all very much in the process of development,” Tomlin said. “He has missed a hole or two as well, and he would admit that. In some instances, the holes aren’t there. In some instances, the holes are there, and he runs through them, but a penalty brings the thing back. We can talk around this, and we have, and I’m open to continue, but I’ll continue to answer in the same manner that I’ve been because that’s the truth as I see it.”

At least Tomlin is seeing it correctly. After all, the tape does not lie. While the Steelers retooled offensive line hasn’t been great at all through the first three games, they aren’t fully to blame for the running game being far from average entering Week 4. Alex Kozora and I have pointed out several instances of Harris being to blame for a few run fails so far this season. In fact, Kozora pointed out on Twitter one of those fails by Harris that happened on Sunday against the Cincinnati Bengals right before Tomlin held his press conference. You can see that play below.

I guess Harris thought the LOLB (#94) was going to cross Freiermuth's face but really struggling to understand why he decided to bounce this run outside. Could've been a big gain if he just got vertical. #Steelers pic.twitter.com/jsHGlmKPXD

While Harris has had a few nice runs wiped out by holding calls this season, those runs only look good in a posterity sense on tape. The long and short of those negated runs is that they did not count.

Entering Week 4, Harris has 21 total rushing attempts on 1st down and 10 plays and only five of those have gained 4 more yards. That’s just a 23.8 percent success rate if you’re scoring at home. On Sunday at Lambeau Field the Steelers will play the Green Bay Packers and if their run success rate continues to remain less than 45 percent for that contest, it’s hard to imagine them winning it.