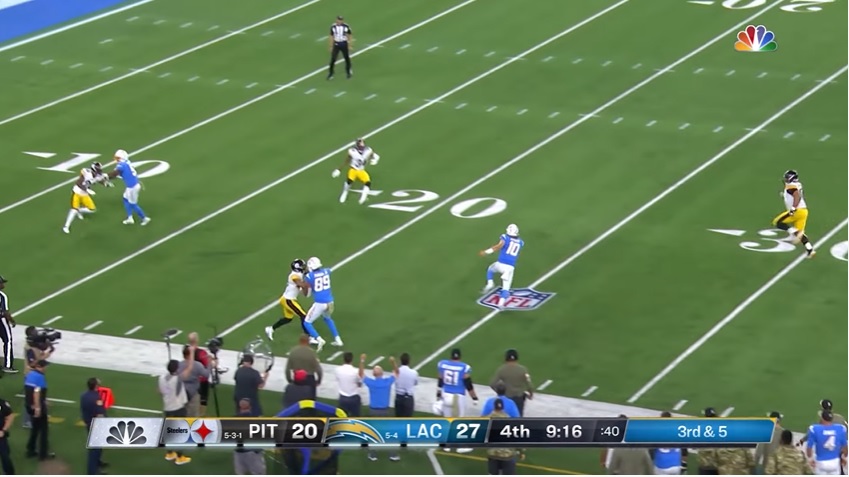 As Sunday’s loss still remains sour for the Steelers, many things went wrong in the performance. In particular, the defense suffered many lapses in all phases.

Justin Herbert isn’t known for his running ability, but he shredded the Steelers in that area. Before Week 11, Herbert had 117 rushing yards on 30 carries on the season. In Sunday’s game alone, he had nine carries for 90 yards, including a few huge third-down conversions.

Herbert’s runs were from scrambles, not particularly by design. Tomlin’s obviously referring to injuries playing a part in Herbert’s rushing performance. T.J. Watt, Isaiahh Loudermilk, and Stephon Tuitt’s absences all hurt the effectiveness of the front seven’s ability to contain.

Many fans and others were calling for a QB spy to be implemented in-game, a tactic to slow down QB runs. Perhaps the circumstances though didn’t allow the Steelers to make such an adjustment.

“In most most instances we are [able to contain], but we weren’t last Sunday. It was my job to recognize that and make alternate plans. The issues were that we had some young, inexperienced guys in the secondary.”

Not only did the front seven injuries affect the run game, but so did the absences of Minkah Fitzpatrick and Joe Haden. In other words, the lack of veteran presence in the secondary affected the decision-making for a potential quarterback spy.

Sunday’s loss was crucial for the Steelers’ playoff chances. The likely returns of Fitzpatrick, Watt, and others this week is necessary against the Bengals. Joe Burrow isn’t necessarily a running quarterback, but the Steelers must make sure that issue doesn’t carry into Week 12.