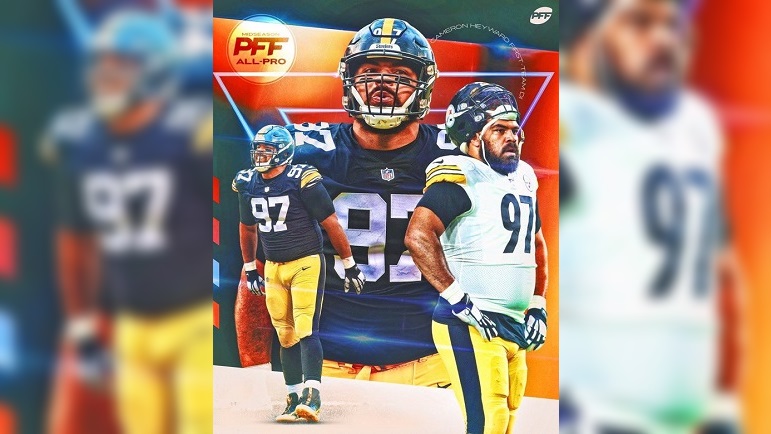 Pro Football Focus announced their 2021 NFL midseason All-Pro team selections on Wednesday and three members of the Pittsburgh Steelers were included in them. Only one Steelers player was a First-Team selection, however.

Heyward continues to play his best football as he gets deeper into his 30s. All five of his best seasons have come in the past five years, including this one, and his current 92.3 PFF grade would represent a career-high if maintained over the full year. Heyward has 26 total pressures and 19 defensive stops, as well as a forced fumble, to his name.

He has yet to miss a tackle while being a dominant force in the run game, with a 91.7 PFF grade in that area. Heyward has also batted five passes so far, tied for his most in a single season after just seven games.

Heyward has been beyond amazing at times this season for the Steelers and even without having the luxury of playing opposite defensive end Stephon Tuitt and beside nose tackle Tyson Alualu. Tuitt has yet to play this season and the Steelers have been without Alualu since about midway through their second game of the season. That added context makes the season that Heyward is having to date even more impressive.

While Steelers outside linebacker T.J. Watt has played very well so far this season, his play to date was only good enough to garner Second-Team recognition from PFF in their midseason All-Pro awards. Watt, who already has 27 total tackles, 8.5 sacks and 15 tackles for loss on the season, to go along with 15 quarterback hits, three passes defensed, three forced fumbles and two fumble recoveries, is Second-Team behind Cleveland Browns defensive end Myles Garrett at the Edge position. Had Watt not missed a game and a half with a groin injury, he might have been the selection over Garrett.

Steelers kicker Chris Boswell also earned midseason All-Pro status from PFF but like Watt, he is a Second-Team selection. Boswell, who is 12 of 13 on field goal attempts so far this season and perfect on his extra point attempts, is Second-Team behind Baltimore Ravens kicker Justin Tucker. Three of Boswell’s field goals have been from beyond 50 yards this season.

Overall, and especially when it comes to Steelers players, I think PFF got their selections correct. Sure, you can make an argument that Watt should have beaten out Garrett, but that lost game and a half to a groin injury really hampers that a little. As for Boswell being second team, there was no way he was going to beat out Tucker at this point of the season. Heyward being a First-Team selection was a no-brainer.

There is now a little more than a half of a season to go so Heyward, Watt, Boswell and possibly even safety Minkah Fitzpatrick, all have legitimate shots at being Associated Press and PFF First-Team All-Pro selections come voting time.