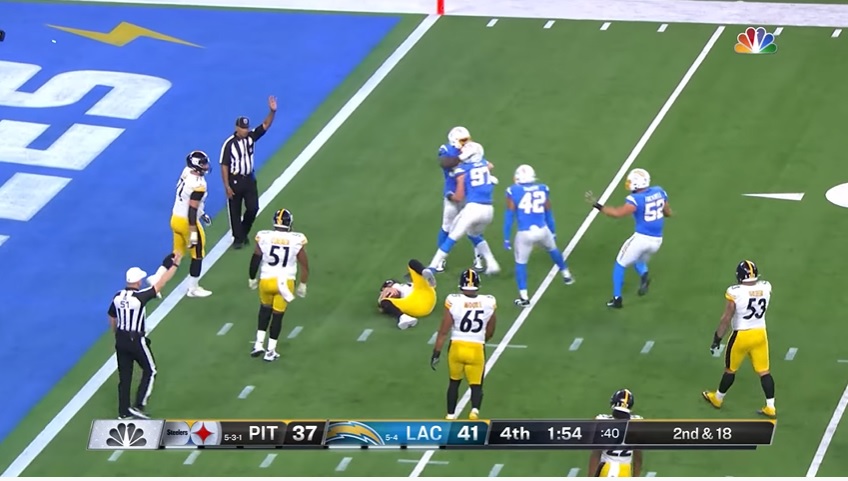 Pretty easy explanation here. At least in terms of assigning blame. Blocked up pretty well across the board. But RT Chukwuma Okorafor tries to be aggressive in his pass set and get hands early on the LDE. But he’s unable to land his punch and the defender is able to swipe and turn the corner. Okorafor can’t steer him upfield and Uchenna Nwosu drops Ben Roethlisberger down. 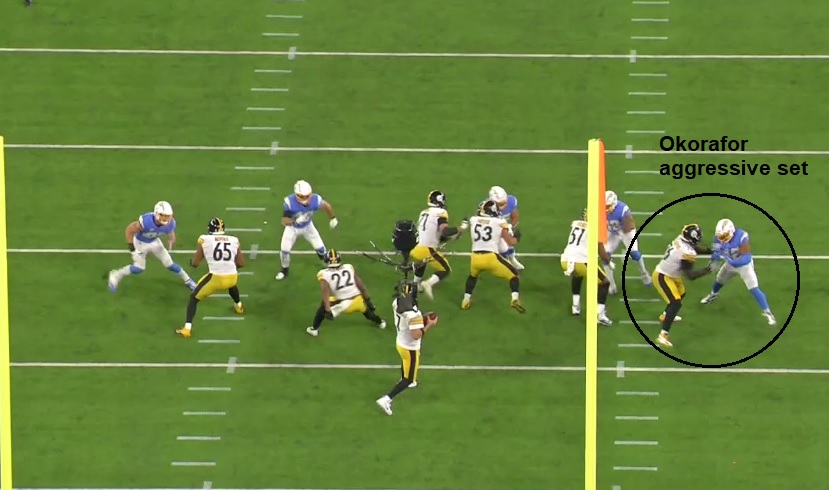 That sums up O-line play well. One guy fails, the whole unit fails. Officially the first sack we’ve charged Okorafor for all season. Now all five starters have given up at least one in 2021. All three sacks allowed Sunday came in the fourth quarter.

Steelers’ final drive, needing a touchdown to win. Chargers could pin their ears back. Here, the RDT (#97 Joey Bosa, kicked inside) and the ROLB run a stunt. Bosa looping over to the edge with the EDGE rusher crashing inside through the B gap. Here’s how it looks. 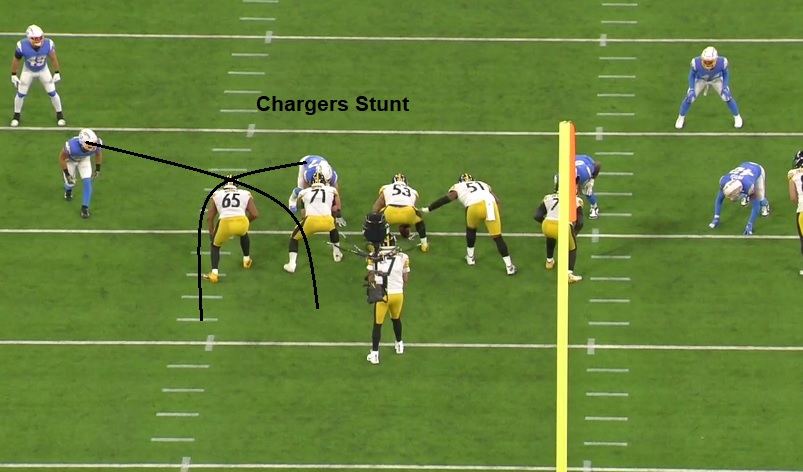 To their credit, Dan Moore Jr. and Joe Haeg recognize the stunt well and pass things off. But Haeg’s technique is poor. His issue has been pass protection and here, he’s not square to the block, opening up his hips and having his back turned to the sideline, not to his man/quarterback. That makes it easy for OLB Kyler Fackrell to squeeze through the gap on his path to Roethlisberger, dropping him. 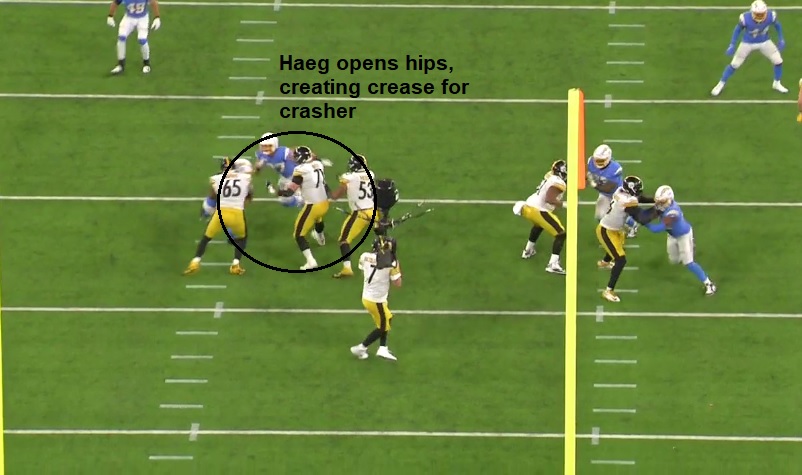 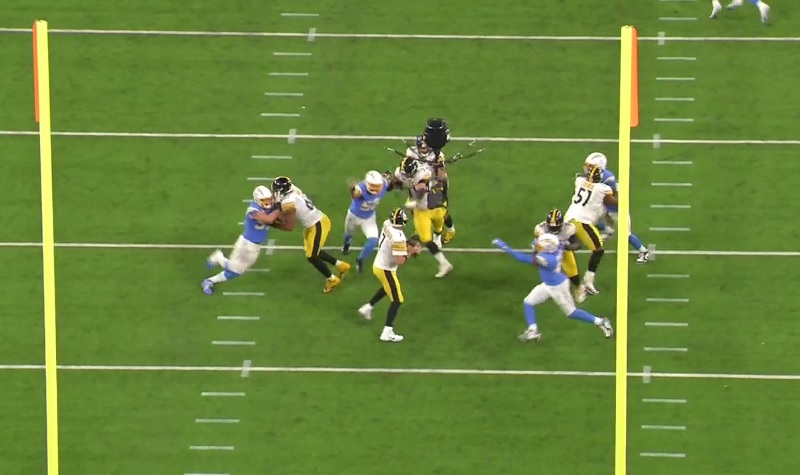 Roethlisberger is a sitting duck and is sacked. Blame pretty easy to put on Haeg for his poor technique. Understand he hasn’t worked much if at all at left guard, perhaps a bit this past week, but a sack is a sack, regardless of context.

Very next play, and the Chargers are running a similar stunt, though from a wider alignment. The ROLB crashing, the RDT (Bosa) looping. But this time, Bosa abandons the loop and contain, seeing a crease in the B gap between Haeg and Moore. Sorta plays out of assignment, but he’s athletic enough to make the play and does, sacking Roethlisberger. 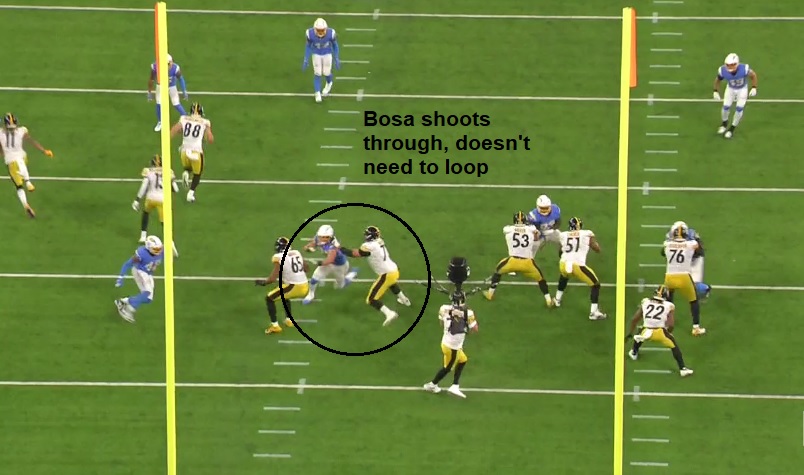 It’s hard to say if this is supposed to be passed off or not by Haeg and Moore. In most cases, it is, but because the alignment here is so wide, there may be more “man” rules at play. The crash by the ROLB also comes late, and Moore is already well into his kickset. There’s certainly no evidence either guy was trying to pass the stunt off to the other.

Here, Haeg is just in a tough spot getting beat upfield. He doesn’t have the foot speed to compete with an athlete like Bosa, who the Chargers smartly aligned inside here.

It’s a bit more difficult assigning blame here, not knowing the exact assignments of these guys. Could Haeg have given a better verbal cue to alert Moore to squeeze down? Did Haeg do so and Moore missed the call? Or did Bosa just straight up win here? End of the day, Haeg is the man who gets beat by the 3T, so I’m putting the blame on him, even knowing the difficulty of this matchup. 2nd and 18, time running out, need a TD, and Bosa gets to rush freely. Tough place to be in as an offensive lineman.