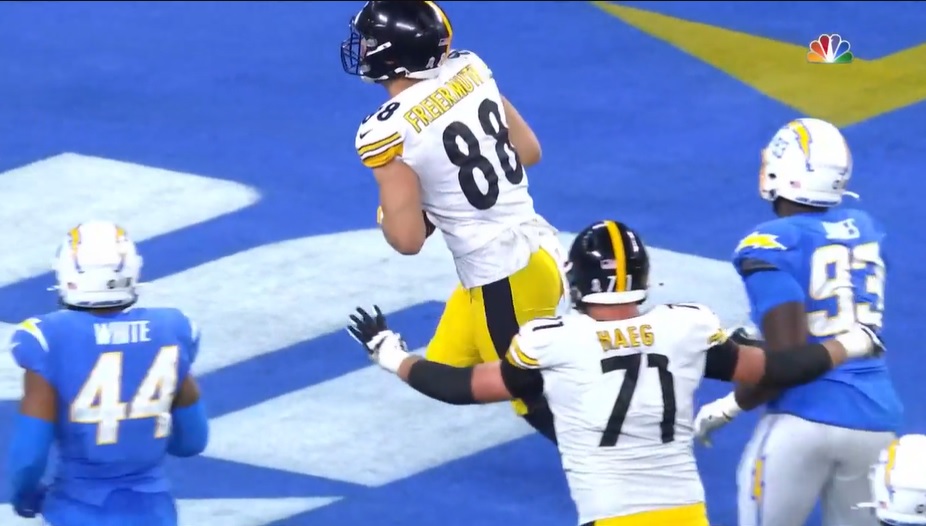 It wasn’t a big yardage day for Harris but it was enough to put him over one thousand yards from scrimmage in his rookie season. He luckily survived two possible injuries on an awkward tackle in the first quarter and a forearm to the helmet in the fourth. He had a couple productive runs and some nice cuts but being down the Steelers went away from the run game. sHe touchdown run probably made many fans happy as it came behind a fullback and with an extra tackle in the game.

In the pass game his routes were limited to sneaks, flat, swing and stop routes and all of his receptions came on check downs after checking as a pass blocker first. There was nowhere to go on most of his receptions and was hit immediately. In pass protection, he again showed good mental processing and a willingness to step up and take on rushers. I would like to see him lower his pads and show a little more aggressiveness to give him a better chance against someone with a full run at him.

Check out the lateral cut Harris makes to his left on this play. With a linebacker in the hole he slides to his left between two blocks. I don’t know how he saw that gap.

Through ten games Freiermuth is third on the team in receptions, fourth in targets and leads the team in touchdown receptions with 5. He was used a little more often on the deeper levels on corner and seam routes in this game. In made a nice catch on and in breaking route in traffic and showed good effort to get a couple yards on a screen that didn’t fool the defense. He did have a drop on an out route and it looked like he may have been a little late getting his head around. The touchdown was on perfectly executed screen with three good blocks from the offensive line.

As a run blocker he is bouncing off defenders and is not sustaining. A better effort to get into the body and drive defenders could be helpful. In his route running he gets jammed or slowed fairly easily. I would like to see him use his hands more to keep defenders off his body.

Green has started every game this season and has played every offensive snap in eight of them. It was literally another up and down game for Green. He was on the ground after missing his first block. The good blocks continue to be on double team block, in space and on the second level. I’ve notice he tries to stun or shove blockers away from him in the run game. This gives defenders space to get around him. Sustaining blocks with continual contact and leg drive would be beneficial.

In the pass game he was good on screens getting out in space and turning his hips to wall off blockers. He did get bulled back on a quick snap but was a little better than last week. He was a bit slow picking up a twist and allowed a pressure.

Moore started has started every game and played every offensive snap in nine of them. He started off the game well driving a defender to the inside on a run block and putting him on the ground. The run blocks were solid overall and again showed off his agility in space on an end around as well as screen.

As a pass blocker he started off a bit slow getting bulled back to the quarterback a couple times. There was improvement in last week’s game and eventually he shifted that way in this game. He was much better in the second half and is improving his ability to shift his weight and pad level to stop those power rushes. I liked his awareness on twists but the guards next to him struggled a bit.

Norwood got the start with Minkah Fitzpatrick out this week and he was an iron man. One hundred plays between defense and special teams. He was used as the deep safety, in Cover 2, in the box, as a robber and in the slot. He was solid in Man coverage in the slot for a handful of snaps and he majority of his tackles came by forcing the runner/receiver out of bounds. He made a nice read on a tight end screen to get downhill and avoid the blocks but narrowly missed the tackle. His mistake came on the final touchdown when he didn’t get enough width and couldn’t catch the receiver up the sideline. A teaching moment for the rookie.

He was a willing gap filler when playing up in the box made a nice tackle coming from deep on a run up the middle playing under control to make the stop. He did take a poor angle on one play to the outside on a running play but I think there was an offensive flag thrown on the play.

It was a quiet night for Harvin. He was only called upon to punt once early in the third quarter and he kicked a 46 yard punt toward the sideline that ended up being a return from minus one yard. He handled seven snaps on three field goals and four extra points with no issues.

Congratulations for Archibong getting a helmet for the first time and seeing his first NFL regular season action. He was a little erratic at first and looked a bit lost on his first couple snaps but ended up involved in the tackle on both. His motor was good showing high effort on every play. They used him at the 1/3/4i techniques along the line.

His snap quickness was inconsistent but he uses his hands effectively rushing the passer showing a nice swipe on one play. He also showed a solid stab rush and flashed the play strength to yank the guard out of his way.

Here are the two tackles Archibong (61) was involved in. You can see he was a bit erratic but I can appreciate the effort

And here is the stab pass rush by Archibong lined up just inside the right tackle. He gets a good push with his right hand in the chest of the guard with a hold of the blocker with his left hand which he uses to yank him out of the way

Inactive for Week 11 – Buddy Johnson (Round 4), Isaiahh Loudermilk (Round 5)