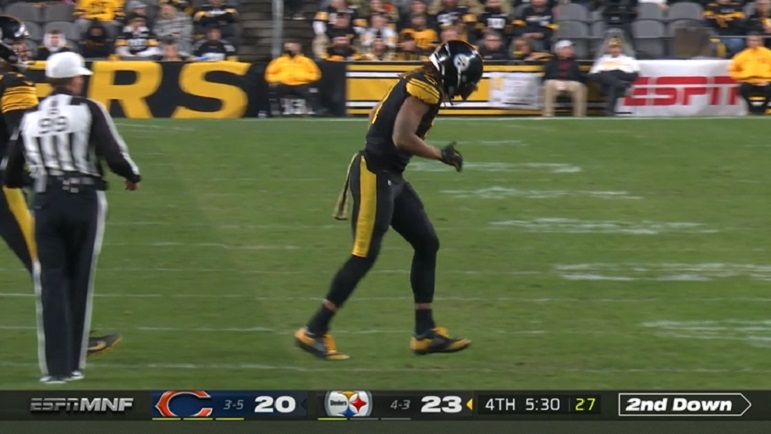 There’s some good news and some bad news when it comes to Pittsburgh Steelers WR Chase Claypool and the toe injury he suffered Monday night. The bad news is Claypool may not play in Sunday’s game against the Detroit Lions and his timetable to return isn’t 100% clear. The good news is that it could’ve been a lot worse.

According to NFL Network’s Ian Rapoport, Claypool is “week to week” with his toe injury. But when he first suffered the injury, some in the organization believed Claypool could miss the rest of the season.

Some relatively good news for #Steelers WR Chase Claypool: His toe injury is not considered season-ending. There was some fear of that originally, but he’s now considered week-to-week, source said. May miss some time, but will be back.

Claypool received an MRI after the game, according to Mike Tomlin, who did not provide much of an update on Claypool during his Tuesday press conference. Claypool did not practice today and it sounds like he’s unlikely to play against the Lions, though Rapoport’s tweet has plenty of wiggle room.

On the season, Claypool has caught 29 passes for 433 yards and one touchdown. He caught three passes for 30 yards in Monday’s win over the Chicago Bears before leaving the game.

Should Claypool miss time, James Washington will see an increase in snaps at the “Z” position while Ray-Ray McCloud could also play more, potentially assuming full-time slot duties. Backup WR Cody White is on the 53 but hasn’t played much in recent weeks. There’s also Anthony Miller, signed to the practice squad weeks ago, who tweeted “Ready” yesterday afternoon. Perhaps he was referring to Claypool’s injury opening the door for Miller to be elevated this weekend against an opponent, the Lions, he knows well.

The Steelers protected a pair of practice squad receivers, Miller and Steven Sims, on Wednesday.

Pittsburgh’s WR depth has been tested this year. Claypool and Diontae Johnson have already missed time due to injury while the team lost JuJu Smith-Schuster for the season one month ago.