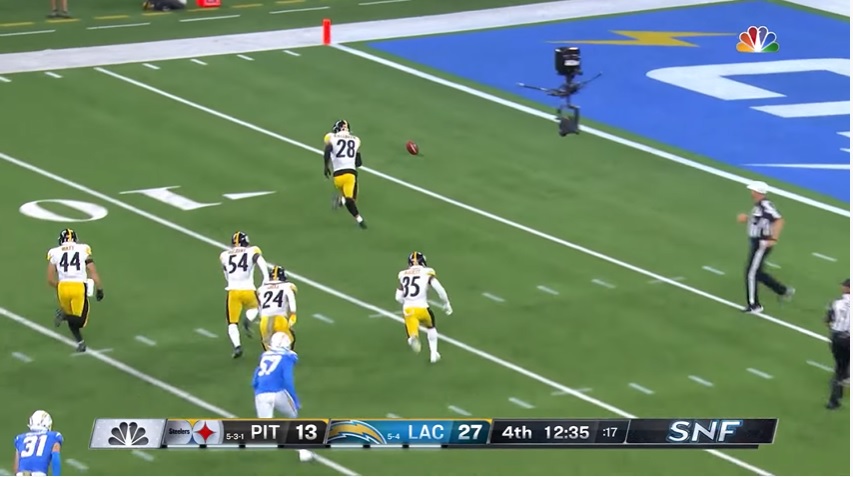 Miles Killebrew has two blocked punts this season, the first Pittsburgh Steeler to do so in who knows how long. But he’s unselfishly not taking all the credit. Like any other aspect of football, he’s reliant on teammates to do their job so he can do his. Speaking to reporters Thursday, Killebrew gave the ten guys he plays with credit for making those game-changing plays happen.

“Any time a punt is blocked, usually it’s a combination of a lot, multiple guys effort on a play,” he said via Steelers.com. “Just take this last game. For example, I’m not getting there, I’m not getting in that open gap unless I have like three or four or five different guys doing their job all at the same time.”

If you haven’t watched, check out our breakdown of Killebrew’s block and how the scheme made it happen. The change in the punt rush picture on the re-punt, how Robert Spillane and Marcus Allen did their jobs, along with Arthur Maulet timing up his rush from his jammer position, to draw eyes of the Lions’ blockers and free Killebrew up to do the rest.

Killebrew’s two blocked punts this season have served as turning points in games. It helped lead Pittsburgh to victory in Week 1, a game in which the offense did very little, and it served as the catalyst to come back Sunday night and take the lead, though the defense was unable to hold it.

A career special-teamer, Killebrew called the Steelers’ group a special collection of guys.

“We talk about all three phases. This unit, this special teams unit with the Steelers, wants to make a severe impact in the game. A positive impact, of course. That’s the goal every game, we want to make a play. We’re not just out there holding space, trying to get a paycheck. We’re trying to make a difference in the game. I love everyone on our group. I would say it’s a special group. You have to be intentional with these things. They don’t just come to you.”

Overall, the Steelers’ special teams units have made a net positive impact this season primarily due to those blocked punts and the tremendous season kicker Chris Boswell is having along with a good kick coverage unit and above average return. They’ve had their blemishes, a costly Ray-Ray McCloud fumble against Chicago, rookie Pressley Harvin’s punting inconsistency, but Killebrew is happy to play for Danny Smith.

“Danny’s consistent. He’s consistent in the aspect of, he takes it very seriously. He doesn’t want guys on the field for him who don’t take it serious. I’ve been on a few different special teams units had, I think this is my sixth different special teams coach. And I would say one thing that’s consistent with good special teams units is you have guys who they want to be out there doing it. It’s a very fine line between guys at this level being maybe upset that their role isn’t something else and the other side of, ‘okay, I’m here and I’m going to give it everything I have.’ And I would say this year with this team under this coordinator, Coach Danny, he’s got guys out there who want to be doing this at a very high level and we just feed off of each other. We feed off of him. And t’s a good environment,”

And come on, how can you not love this guy?

With the way Smith schemes things coupled with player’s ability to execute, don’t count out the Steelers’ chances of a third punt block this season. At the least, opposing special teams coordinators will be burning the midnight oil each week making sure they’re not next.