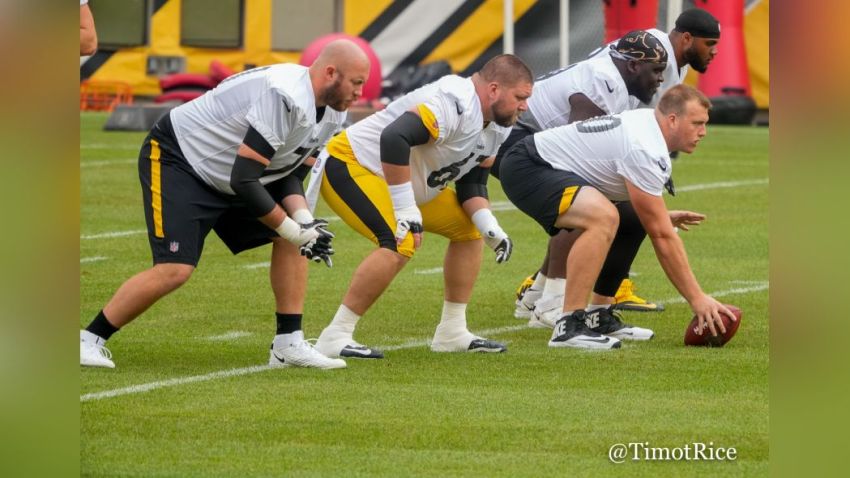 The Pittsburgh Steelers’ starting left guard, Kevin Dotson, is on the Reserve/Injured List with an ankle sprain, and will miss at least the next two games, having already missed one. The man who started in his place on Sunday, J.C. Hassenauer, suffered a pectoral injury in that game, and is unlikely to be available.

Who starts at left guard on Sunday, offensive coordinator Matt Canada more or less told reporters yesterday, will be solidified during today’s practice. Veteran Joe Haeg came in and finished out the game Sunday when Hassenauer went out, but there is also B.J. Finney, who has a dozen starts for the Steelers, including five at that left guard spot.

“Joe’s come in there and really stepped in and done a lot of different roles for us and done a very good job”, Canada said, via transcript. B.J.’s there, getting ready to go at all the spots inside too. We’re working through that daily and we’ll come out to the final answer here coming on Friday’s practice”.

Prior to the past couple of games, Haeg had only worked at tackle, based on training camp, the preseason, and the snaps he’s taken in-game. He does have prior experience at guard, but he had not worked at guard in practice prior to the start of the regular season. Hassenauer and Finney had been filling in there whenever needed.

Given that Haeg stepped in on Sunday, though, should we really expect the next step, which is actually starting, to be any different? Haeg is the guy they signed to a multi-year deal this offseason. He already has one start at right tackle. He did struggle some at guard, though, against the Chargers.

As for Finney, it’s not clear what’s going on. He came into the game earlier in the year when there had been injuries at guard, in Week 2 and in Week 4, at both left and right guard. Hassenauer had been playing center when needed. But Finney didn’t even dress two weeks ago, so Hassenauer came in and played 56 snaps at guard, and then started the next game, before leaving due to an injury of his own.

There is another name back, which is Rashaad Coward, another lineman they signed as a free agent. Though he made the initial 53-man roster, he was quickly cut, and then spent some time on the practice squad before briefly winding up elsewhere. He is now back on the practice squad, though he likely won’t dress with Trai Turner trending toward playing.