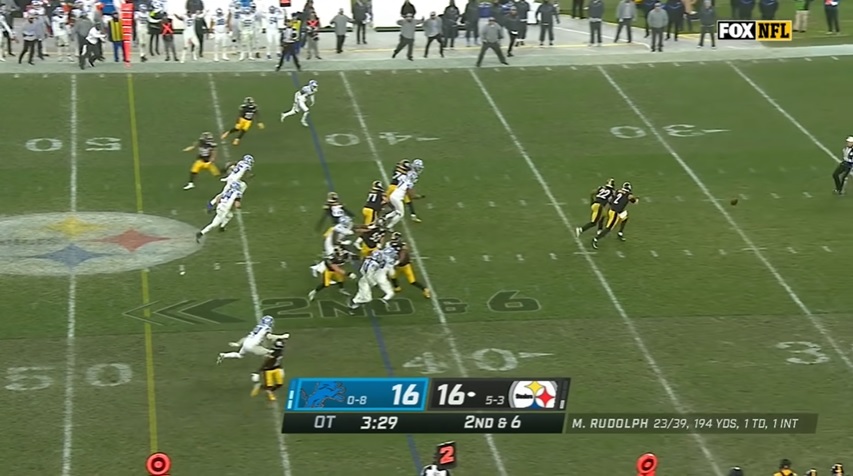 Don’t blame the change in quarterback. Nor the Lions’ blitzes. Or the weather. Kendrick Green’s job is to snap the ball on-target every time and he knows he didn’t do that job well enough last Sunday against Detroit. Speaking to reporters Friday in a clip tweeted by The Trib’s Chris Adamski, Green took full responsibility for his snapping issues and said he’s working hard to correct them.

“Not really,” he told reporters when asked if there was a common thread on his bad snaps. “I just have no excuse for it, honestly. Can’t have it.”

Green had several snaps that were too high in Week 10. The most disasterous one came in overtime, a 2nd and 6 play near midfield that sailed over Mason Rudolph’s head. Pittsburgh recovered the ball but last 19 yards, leading to a punt and thwarting the chance of getting into field goal range.

Being a good snapper leaves players with little margin for error, demanding perfection 50, 60, 70 times a game. But Green knows that’s his job and he must improve regardless of whether Mason Rudolph or Ben Roethlisberger start Sunday night against the Los Angeles Chargers.

“It’s all me. Need to slow down and realize I need to snap first. It has nothing to do with who’s back there.”

Green, by the way, says he’s taking tips from J.C. Hassenauer, the backup center, who also appears to be the first-team left guard and likely to get the start with Kevin Dotson dealing with a high ankle sprain.

It’s a point Mike Tomlin hammered home during his Tuesday press conference earlier this week, saying no meetings were required to solve the issue.

Snapping of the football certainly is one of those “fundamental” things. On both sides of the ball, Pittsburgh will need to get back to its roots. Improved snaps, fewer penalties, and much better tackling defensively. Do those things and the Steelers should have a chance to come away with a victory, though the Chargers are a talented team and won’t be an easy matchup.

Kendrick Green on how he addressed his problems snapping last week pic.twitter.com/6aNP0TUmAl