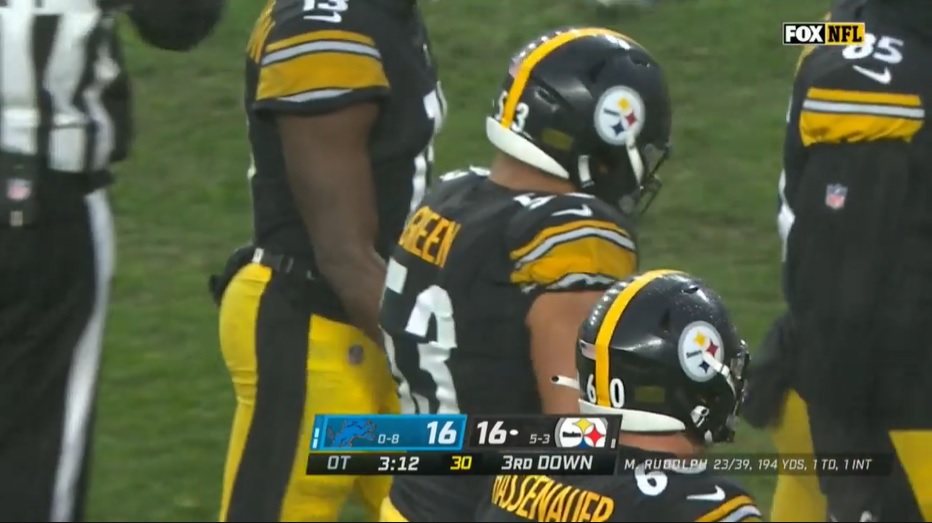 As much as football revolves around X’s and O’s and detailed, 33-minute breakdowns about the Pittsburgh Steelers’ over front, sometimes it’s just as simple as doing a better job. That’s Mike Tomlin’s evaluation of Kendrick Green’s poor shotgun snaps Sunday against the Detroit Lions.

“There’s nothing to be on the same page about,” Tomlin said when asked Tuesday if Mason Rudolph and Green needed to get on the same page. “Green’s just got to get the snaps down. It doesn’t require a meeting, it doesn’t require a schematic adjustments. Certain things are fundamental. When you coach and play football at this level, sometimes you can make the simple complex. Or you can get too smart. No, we’re just going to ask that guy to snap the ball in a proficient, professional manner. We’re going to move on with our life.”

Green had multiple high snaps against the Lions. One came on the team’s opening possession, Rudolph able to bat the ball to himself and still make the throw, an impressive showing of composure.

The second was much more costly. Facing 2nd and 6 on their own 42 in overtime, Green’s snap was off-line and sailed over Rudolph’s head, shades of Maurkice Pouncey’s ugly moment in last year’s Wild Card game.

Green’s snaps were as bad Sunday as they have been in any game this season, but he had a couple of high ones earlier in the year. Sometimes that happens, most snappers – especially rookie ones – aren’t perfect, but they are issues that need to be corrected.

Tomlin said the onus is on Green to fix things, not for Pittsburgh to change its gameplan.

“We’re not going to put the quarterback on the center and change our personality or approach. That way it requires nothing from Mason. Mason’s got a lot of work ahead of them getting ready to play quarterback. And I think it’s reasonable to expect, the center to execute shotgun snaps on a consistent basis. Now he didn’t in the last game. And so, he’s got to re-center his focus and do a good job there this week in preparation, but it won’t create any additional meetings or planning from us.”

Tomlin’s said in the past he uses this press conferences to talk to his players more than he does to communicate with the media. Consider it message received for Green, whose inconsistent snaps sum up his inconsistent play this season.