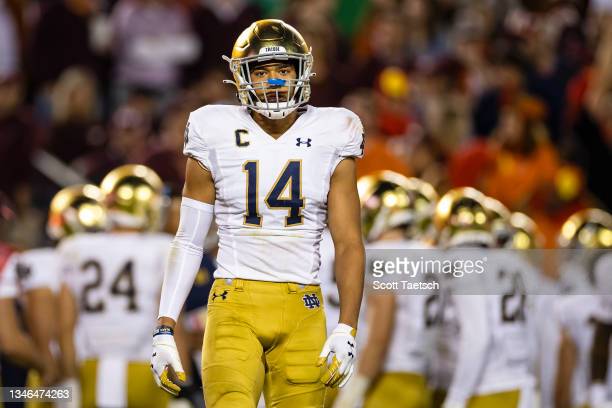 Once the Pittsburgh Steelers acquired S Minkah Fitzpatrick from the Miami Dolphins back in 2019, it appeared as if they may have shored up the backend of their defense for the foreseeable future with former 1st round safety Terrell Edmunds also in tow. However, fast-forward to today, and Edmunds is scheduled to hit free agency this offseason and Fitzpatrick has struggled to provide that impact when have become accustomed of seeing from him his first two seasons in Pittsburgh. Giving the uncertainty of the position heading into 2022, below are several high-profile names from the college game that Pittsburgh should keep their eye on heading into draft season this spring.

For most fans in-tune with college football and that keep up with the NFL Draft on a yearly basis, Kyle Hamilton is a name that should not be new to you. Hamilton has been touted as the crown jewel prospect at the safety position since his freshman year at South Bend, making an instant impact on the gridiron for the Fighting Irish. Hamilton possesses that rare size and length you love to see, standing 6’4, 220lb, yet has the speed, explosiveness, and instincts to be an easy mover in space. He covers ground like a fiend as a single-high safety tracking balls in the air he has no business getting to, displaying the range to cover the whole field to make a play.

While he excels as a deep coverage safety, Hamilton also has the talent to run with backs and tight ends in man coverage. He also is a reliable tackler when rolled up near the LOS as a quasi-linebacker, shooting gaps hard and runs through contact. There are hardly any weaknesses in his game for a player often compared to the great Sean Taylor or most recently Chargers safety Derwin James due to his versatility, size, and athleticism. Hamilton should be the first safety off the board and play at a Pro-Bowl level early on in his NFL career.

For the Crimson Tide, Jordan Battle is a name that will excite the fanbase at Alabama while striking fear into his opponents. Battle has vastly improved his game since arriving in Tuscaloosa, becoming a more well-rounded prospect. The 6’1, 210lb junior’s specialty is laying out punishment over the middle of the field for those brave souls who dare venture into passing lanes he is tasked to defend, combining explosive power and strength with fine tackling technique to lay the hammer down receivers and ballcarriers alike.

While tackling and serving as the enforcer over the middle seems to be his forte, Battle has quietly become a great coverage defender in the college game. According to Pro Football Focus, Jordan Battle has the most coverage snaps played among safeties without allowing a TD this season (398 snaps). He too will play single-high, split zone, and even in the box for the Tide, showing off the range, instincts, and ball skills to consider himself a well-rounded prospect for the NFL game.

Daxton Hill originally committed to be Battle’s teammate at Alabama but decided to take his talents to Ann Arbor to play for the Wolverines. Given his impact the last few seasons for the Michigan defense, it’s hard to say the versatile defensive back made a bad decision. Hill is a jack of all trades defender, having lined up as a deep safety, strong safety, split zone safety, nickel/dime defender, and even outside cornerback. He is phenomenal on special teams coverage units and has a knack for making big plays. His athleticism and skillset allow him to run in-stride with TEs in coverage, while also holding his own against traditional receivers. His ball skills are there as well to rack up interceptions and pass deflections.

Standing at 6’0, 192lb, Hill is a player that can be a defensive coordinator’s dream at the next level due to the number of hats he can wear. You can ask him to be the last line of defense, run with a TE down the middle of the field, run with a WR up the sideline, and even come downhill and lay the wood in run support. He’s also a capable blitzer that brings another element to disguising looks against opposing offenses, making him an intriguing fit for nearly any defense with a high ceiling in the league.

Verone McKinley III had the opportunity to play around a talented Ducks secondary since arriving in Eugene, but now he stands as the clear main attraction for the Oregon backend. The 5’11, 194lb redshirt sophomore is the man you want on the backend of the defense, having a ball magnet taped to his hands with ten INTs and nine PBUs to his name since earning a starting spot. His instincts and awareness help him be in the right spot at the right time to make the opportunistic play for the defense and take the ball away from the opposing offense.

McKinley III is a viable defender both as a deep coverage defender and when rolled up into the box or near the nickel. His man coverage is solid yet will need refinement going forward to handle NFL-caliber receivers. That being said, look for McKinley to make an immediate impact for a defender needing a splash in the turnover department and has the room for continual growth at multiple facets of his game.

Most college football fans are well aware of the dominant defense the Georgia Bulldogs boast here in 2021. The unit seems to be littered with NFL talent and the same goes for S Lewis Cine. The 6’1, 200lb junior doesn’t had gaudy stats on the stat sheet, but after hearing his name over and over in drafts circles and diving into the tape, you immediately find yourself in awe of his play against the run. Cine is the definition of an enforcer over the middle, playing the strong safety position like a pro’s pro. His stopping power is absurd for a player of his size, blowing up running backs with a full head of steam in their tracks and sending them backward with impressive force.

He takes greats angles of pursuit to the football and arrives with nasty intentions when attempting to break up a pass over the middle of the field. Cine is the perfect complement to a centerfield free safety as that hard-hitting quasi linebacker that can play in a split zone look and make plays against the pass. For a team looking for a mean son of a gun that loves to stick ballcarriers and give receivers second thoughts about catching passes, Cine fits the bill.

What are your thoughts on the current state of the Pittsburgh Steelers safety room? Do you think Terrell Edmunds will be back in 2022, or that Pittsburgh will let him walk and they will look to add new blood in the secondary? What do you think of the names provided and their potential impact in Pittsburgh? Please leave your thoughts in the comments section below and thanks again for reading!