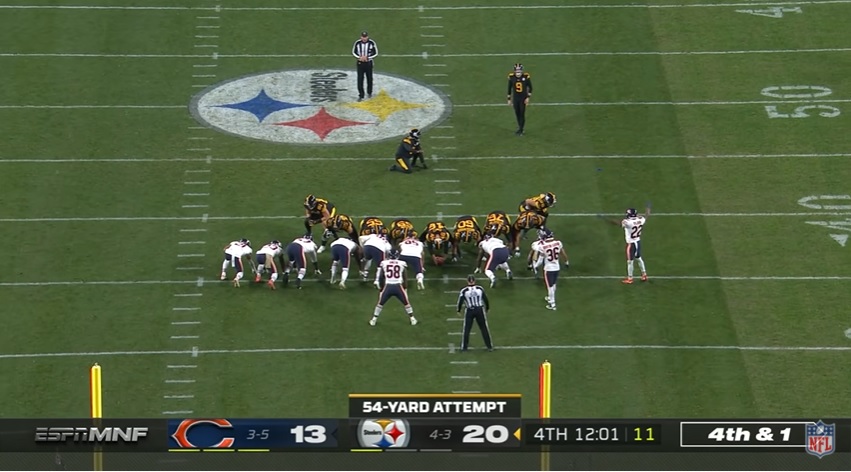 The Steelers special teams has become a major strength of the team this season. Chris Boswell has continued his tremendous Steelers career. Often times, the other two aspects of a kick don’t get enough credit. That is, the long snapper and the holder.

Christian Kuntz and Pressley Harvin have been able to hold their own as rookies. Each of them beat out veterans in the preseason to get to where they are.

The rookies have been impressively consistent, making for one of the best units in football. Coach Tomlin opted to kick a 54-yard field goal against the Bears rather than go for it on 4th-and-1. Harvin was certainly  happy with Tomlin’s decision.

“I wasn’t surprised, but I appreciate [Tomlin kicking it],” Harvin said after practice Wednesday via the team’s website. “I appreciate him for that because it obviously shows that he believes in us.”

The kick was a crucial one, making it 23-13 and a two-possession game. The offense’s inconsistency likely played a role in the decision, but the kicking unit showed tremendous resiliency Monday night.

Boswell’s kick(s) made up for the missed extra point earlier in the game that almost cost the Steelers later in the game. Harvin’s inconsistencies as a punter haven’t affected his holding efforts, encouraging signs for a youngster like him.

Boswell’s 94% rate sits fourth in the NFL. The statistic goes to show how excellent the Steelers have been in all three phases.

Harvin’s growth and improvement as a holder has been fun to watch. His punting will continue to grow as well as his mental game becomes better. Between Harvin, Kuntz, and Boswell, Steelers fans are lucky to be confident when the field goal unit comes onto the field.