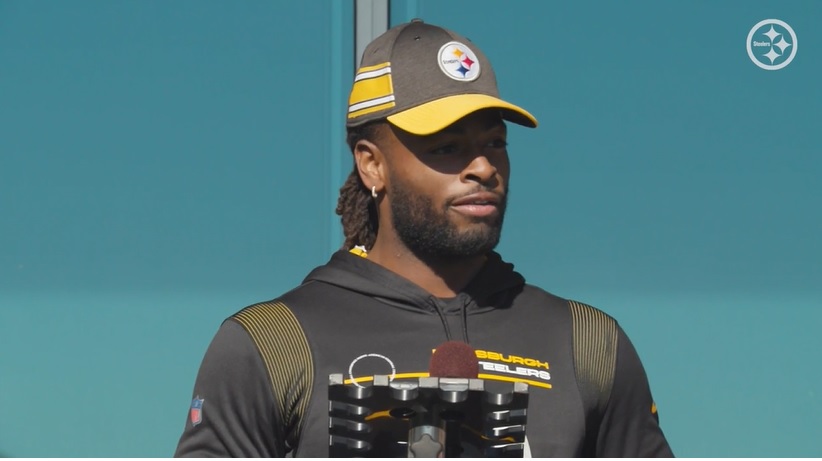 As we talked about earlier in the week, Ben Roethlisberger made the high IQ move to shift Najee Harris to Myles Garrett’ side on Pat Freiermuth’s 4th and goal touchdown last weekend against the Cleveland Browns. It was Harris who, maybe not picked up, but got in the way Garrett, allowing Roethlisberger time to hit Freiermuth for the score.

Saturday, Harris gave his side of the story and said what he did wasn’t in the Steelers’ playbook.

“Anytime I go into the game, I always wanted to know where 95 was at,” he told reporters via Steelers.com. “Because he’s so much of a good player, he’s a game wrecker. So when he put me on that side, I was supposed to go to the right and help out the tight end. But I saw him on the left and I was thinking, that’s going to be a harder for block for Dan. He’s a rookie. I’m a rookie too, but he’s a rookie. So I scanned to the right for my protection and I wanted to make sure that Dan was good on the left. That ultimately made me come back the other side and help him.”

Harris’ calculation proved to be the correct one. Garrett beat Moore around the edge and would’ve had a free path to Roethlisberger had it not been for Harris, who put himself in harms way to get enough of Garrett and afford Roethlisberger the extra second.

Harris admitted though that isn’t what the protection called for. One of those “no, no, ok, way to go” type of moments that happen from time to time.

“I’m not supposed to do that. So let’s just put that out there. So my coach did kind of say ‘good job, but don’t do that again.'”

While Harris may have strayed from his assignment (though it’s important to note he checked for a blitz first before scanning to Moore and Garrett) that’s a high-level play from a rookie. The ability to understand a situation and play outside of structure. Making an educated guess that Garrett was going to be a real problem on 4th and goal with the game on the line and ultimately, making the play.

It’s one of those instinctual, gut-feelings the great players in Steelers’ history have made. It’s another feather in the cap of a very good rookie season from Harris, proving his value not just as a runner but receiver and blocker.