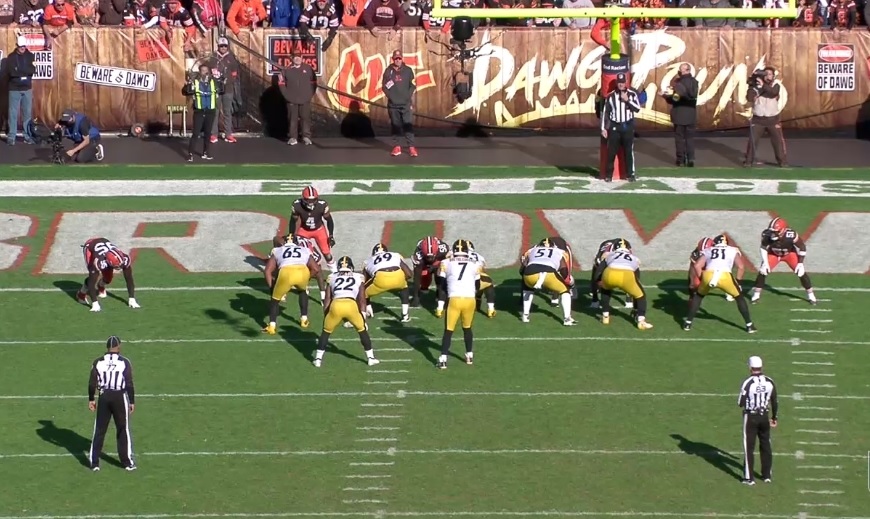 Pat Freiermuth caught the go-ahead touchdown, a tremendous juggling catch in the back of the end zone to put Pittsburgh up 15-10 in their win over the Cleveland Browns Sunday. But if it wasn’t for Ben Roethlisberger and Najee Harris, that play does not happen. And we could easily be talking about a Steelers’ loss and 3-4 team right now.

Speaking to reporters Wednesday, Roethlisberger explains how he bought himself an extra second to throw to Freiermuth.

“He was supposed to be going to the right and blocking,” Roethlisberger told reporters via Steelers.com. “Just thought it was smarter to bring him over to the left side.”

You can see the play here. Roethlisberger moving Harris from the right to left pre-snap. After Harris checks for any linebacker blitz, he immediately gets his eyes to Garrett’s side. Dan Moore was beaten badly on the play – a common theme Sunday – and Harris puts his face in the fan to get in the way long enough for Roethlisberger to fire to Freiermuth.

Harris has served as the Steelers’ bellcow all season, playing well over 80% of the team’s snaps this year, including 84% of the time in Sunday’s win over Cleveland. Roethlisberger commended Harris for a can-do attitude.

“He wants to do more than be just a great runner. Being a running back is about more than just being a good runner. Pass pro. Even down the field on one of the reverses, he got in the way and created a block. He takes pride in wanting to be great and we’ve seen a lot of growth.”

Coming out of Alabama, Harris was regarded as a well-rounded back. He caught 80 passes his final two years at Alabama and those skills have translated to the NFL. His 37 receptions are second-most on the team right now and he’s easily on track to break Chase Claypool’s rookie reception record. His blocking has been good, though not always great, but this play against the Browns was one of his best moments. Without Roethlisberger identifying and Harris executing, that play ends in a sack, not a touchdown. And that game may have ended in a Steelers’ loss.