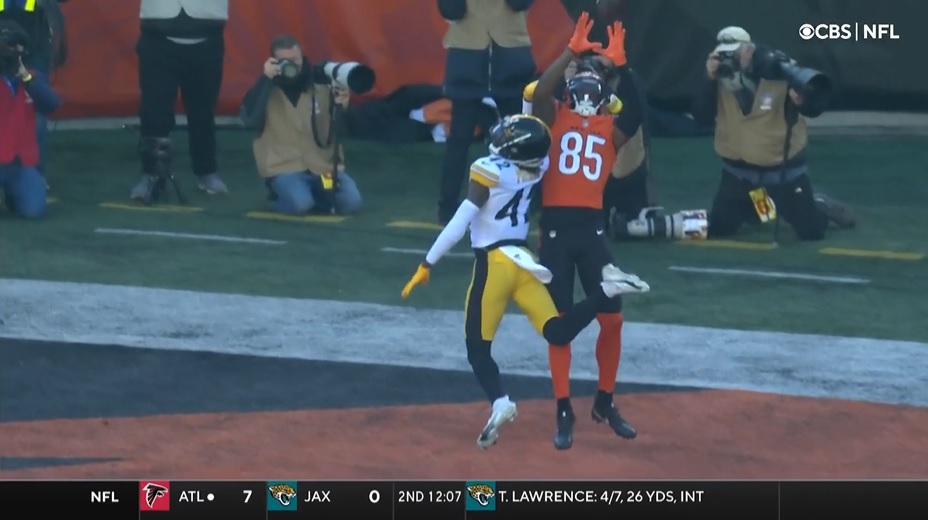 Pittsburgh Steelers’ CB James Pierre had an abysmal performance against the Cincinnati Bengals Sunday afternoon. It could’ve been his redemption game after getting beat by Ja’Marr Chase for a long TD in their Week 3 meeting. Starting for the still-injured Joe Haden in Week 12, Pierre was tested early and often. He flunked the test.

Let’s go through some of his most notable errors in this one. Unfortunately, there’s lots of them.

The first is the most memorable, the 32-yard TD Tee Higgins Moss’d him on. Pierre is playing off coverage, the don’t-get-beat-deep variety, and still got beat deep. Pierre’s initial coverage looks fine, but playing corner is all about how you finish.

At the catch point, Pierre is a mess. He turns his back to the ball and loses all chance to make a play on it. No corner has ever made a play looking like this. Totally misjudges where the ball is at. 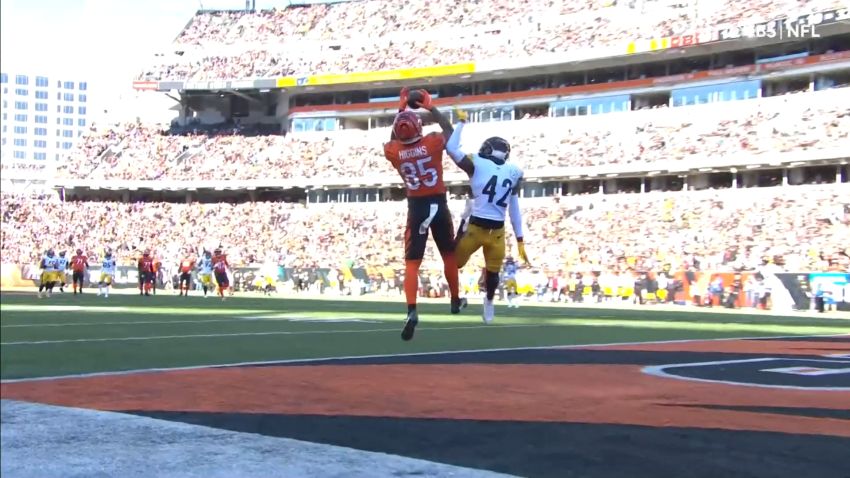 Higgins may have gotten a hand on his back, but as far as receiver/defensive back contact goes, it’s minimal. Pierre just isn’t able to flip his head around and has no chance at the catch point, flailing and falling to the ground as Higgins scores. Perhaps Pierre felt like the ball would be thrown more out in front instead of it becoming the jump-ball situation it was.

Next clip. Pierre the LCB to the bottom of the screen. Off-coverage again, the theme of the day, especially after getting beat deep for the score. Steelers in Cover 3. Nice post-corner route by Higgins here to get Pierre off-balance as he tries to flip his hips to the sideline. That stumble gives Joe Burrow enough time to fit the ball in there, Pierre unable to close on the sideline to impact the play.

Good route, good throw, but Pierre isn’t balanced enough here to explode out of his shuffle and close on the ball.

Similar theme here later in the game, Pittsburgh again playing Cover 3. Higgins making the slight adjustment to gear down and run the curl route with Pierre’s coverage again off and soft. But Pierre doesn’t explode at the top here, showing little aggression to drive downhill to potentially break the pass up or at least limit YAC. It’s an easy pitch and catch from Burrow to Higgins, who is able to gain another three yards after making the grab.

Tackle the catch is one thing, and in this situation, is probably all Pierre will be able to do. But you gotta make the QB and WR work harder than that and at least close right after the catch to limit the receiver picking up a couple extra yards. Every yard matters in the NFL.

Different assignment here. Pierre again the LCB, bottom of the screen. Cover 2 with Pierre responsible for the flat. He presses #1 and rightly lets him go as he breaks inside. It’s a slant/flat concept between #1 and #2, the tight end running into the flat, becoming Pierre’s responsibility.

Despite recognizing that, Pierre attempts to get depth after jamming the wide receiver instead of covering the flat. Burrow hits the now-open tight end underneath. Pierre spins his body around instead of driving on the football, and allows an easy catch for an additional run-after, about another three yards.

This time, Pierre is aligned to the top. Press coverage against Higgins. He misses on his jam and is immediately put in trail position the rest of the way. Lose early, lose late, and Pierre isn’t able to drive and finish as Burrow hits Higgins over the middle for a 19-yard gain.

Kudos to Pierre for making the tackle short of the end zone, though the Bengals scored the next play, but it’s another catch-and-run allowed. Man or zone, Pierre struggled.

One last play. This time against the run. Joe Mixon cuts this run back to the right. Pierre is the backside contain player for any cutback, and lines Mixon up. But Mixon cuts to his left and breaks Pierre’s ankles, breaking into the open field for his best run of the day, a 32-yard pickup.

Overall, Pierre has done a good job downhill against the run this season. But not here.

Corners have bad days. They all do – good ones, bad ones, ones in the middle. But this was an especially bad day for Pierre. Now it’s all about trying to bounce back. Any corner worth their weight must have a short-term memory. Joe Haden figures to return this weekend against Baltimore, shuffling Pierre from starter to dime player, meaning his chances for redemption will be limited.

Whenever he is on the field, an outside corner in passing situations, expect opposing coordinators to go after him. Pierre will have to respond and play better technically. Because playing corner is all about making the next play.