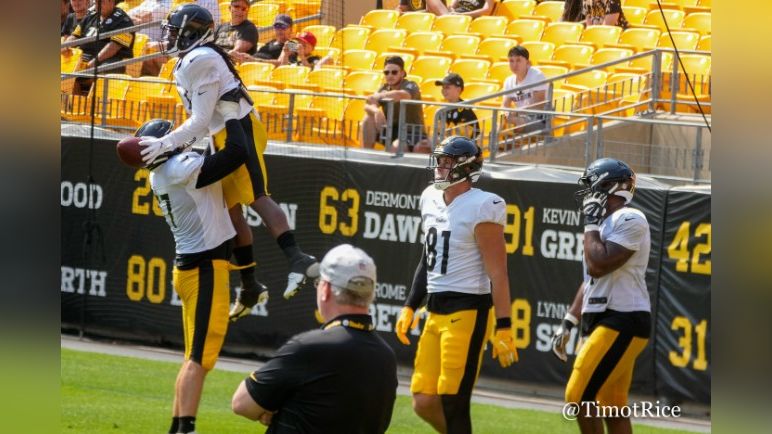 Topic Statement: TE3 and RB4 could be a weekly battle to see who gets the last gameday helmet.

Explanation: The Steelers chose to dress two tight ends two weeks ago when Eric Ebron was injured and missed the game, and second-year running back Anthony McFarland was just activated from the Reserve/Injured List. He did not dress, however, on Monday night, with Kevin Rader being elevated from the practice squad.

Given that the question has been in play for two weeks and we’ve gotten two different results, I would say that the signs point to yes. And it goes to what offensive coordinator Matt Canada loves to repeat over and over again, which is about having matchups for specific opponents.

The Steelers felt that McFarland could match up better against the Cleveland Browns the week before. On Monday, they wanted a heavier tight end presence with blocking bodies. Hopefully somebody asks offensive coordinator Matt Canada about it today.

Let’s keep perspective, here. The two games to which this subject could be applied are the two games that Eric Ebron missed. Ebron is not going to be a healthy scratch when he comes back, and he looks to be on his way back this week.

McFarland will very likely go back and forth between getting a helmet and not, but that will be as a third running back, competing against Benny Snell and Kalen Ballage for his opportunity to dress, not from the tight end position.

Injuries to JuJu Smith-Schuster and Chase Claypool (the latter hopefully a short-term issue) only make the tight end position even more valuable. They always dress three when they feel like they have three worth dressing, and with Zach Gentry’s growth this year, they finally have that, so once Ebron gets back, that group will once again be fixed. The running  backs can fend for themselves.