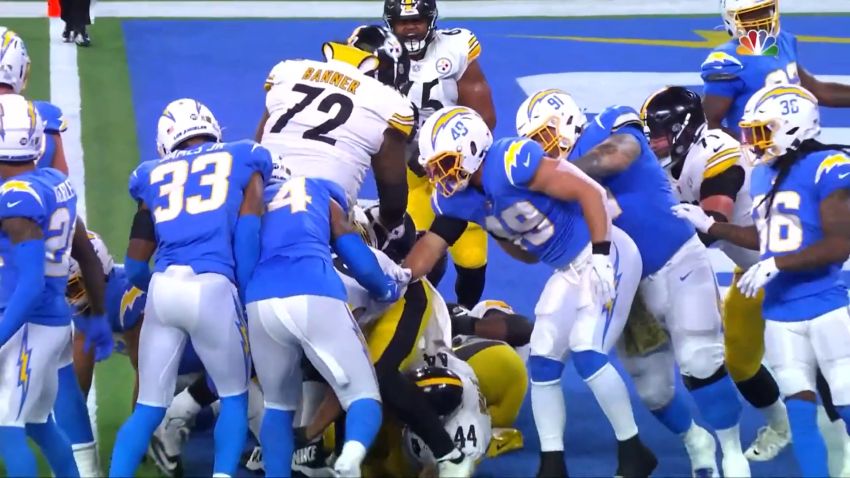 Explanation: Given that Steelers head coach Mike Tomlin said after yesterday’s game that we can potentially expect to see changes made along the offensive and defensive lines, and that plugging in Zach Banner would be the most likely change to be made, it seems reasonable to ask once again if this week is finally Banner time.

The offense is regressing. The run game is regressing. Chukwuma Okorafor is not a run blocker. There is nothing to lose by starting Zach Banner at this point. They paid him, anyway. They might as well see what he has to offer.

He has dressed the past two weeks, and has gotten a couple of snaps in jumbo packages, having previously played it in 2009. He was supposed to start at right tackle this year before he had a setback in his recovery from an ACL tear, anyway.

The Steelers were hesitant to make the switch only because they were winning games and had some momentum, and the line was seemingly starting to gain some cohesion. That’s not the case anymore. After a second three-game non-winning streak, the time is now to make this change, even if it’s a minor one.

First and foremost, the defensive line is far more concerning than the offense. The Steelers’ biggest problem as a team is their complete inability to stop the run. They have been getting absolutely gashed week in and week out for a while now, and everybody is sick of it. If there is a change made, it will be here, and likely with Carlos Davis being activated from the Reserve/Injured List.

Besides, it’s not as though Tomlin committed to making any personnel changes. He just said that he is open to “whatever is required to change what’s trending”. That particular phrase really sounds like he’s talking more about the rushing defense than the rushing offense, anyway.