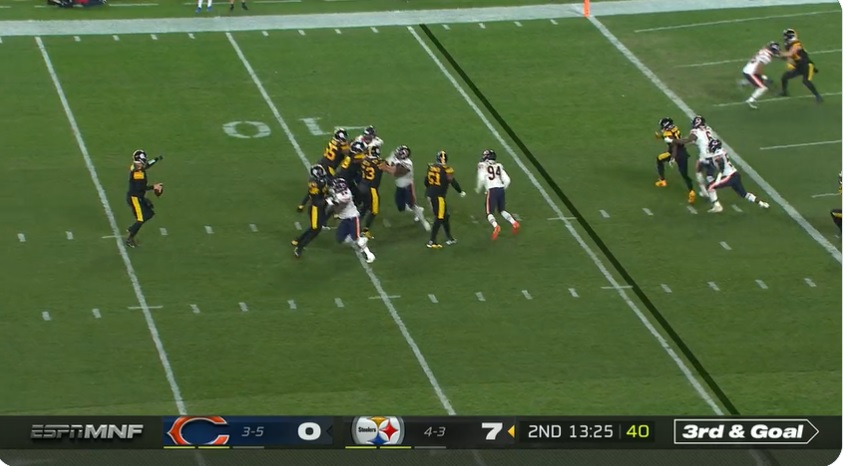 The Steelers allowed 21 fourth quarter points after coming into the quarter up 20-6, but Chris Boswell’s 40-yard field goal was just enough to give the Steelers a 29-27 win. The Steelers’ winning streak is now at four games and they improve to 5-3.

The Steelers won the toss and deferred, and the defense immediately forced a three and out. On third and seven from the Pittsburgh 49, QB Ben Roethlisberger hit wide receiver Chase Claypool down the sideline for a 26-yard gain, and a 12-yard run by WR James Washington set the Steelers up on the Bears’ 10. On the next play, running back Najee Harris capped off the drive with a 10-yard touchdown run, and Chris Boswell’s extra point gave the Steelers an early 7-0 lead.

Two penalties by the Bears on their next drive led to them stalling out at their own 15, and the Steelers started their second drive with great field position at their own 42. The Steelers couldn’t capitalize though, picking up just one first down on the drive before punting. Defensive lineman Cam Heyward didn’t make the Steelers wait long to get the ball back, intercepting QB Justin Fields to give the Steelers the ball at the Chicago 36.

The Steelers opened up the drive with four straight Harris runs, going for it on fourth and one and picking up the first down on the last play of the first quarter. A five-yard run by RB Benny Snell and an 11-yard reception by WR Diontae Johnson had the Steelers in business, and on third and goal from the Chicago 4, Roethlisberger and TE Pat Freiermuth connected for the rookie tight end’s second touchdown in as many weeks. Boswell was good on the extra point, and Pittsburgh took a 14-0 lead early in the second quarter.

The Pittsburgh defense forced another Chicago three and out, and the Steelers got the ball back with 11:49 left in the first half. They failed to pick up a first down, and punter Pressley Harvin III shanked a punt 32 yards to the Chicago 48, which is where the Bears took over. A 25-yard Fields completion to TE Cole Kmet moved Chicago to the Pittsburgh 27, but two plays later, OLB T.J. Watt collected his second sack of the night for an 11-yard loss. A Bears penalty negated a 15-yard gain on third down that would’ve put them in field goal territory, and Chicago punted from the Steelers’ 41. Pat O’Donnell’s punt was received by Ray-Ray McCloud for a fair catch at the Pittsburgh 10. Pittsburgh again couldn’t pick up a first, and Harvin’s punt was slightly better, as it traveled 46 yards after a friendly bounce to pin Chicago at its own 36.

The Bears just barely got two first downs, including one on an encroachment penalty by Heyward, but on first and 10 from the Pittsburgh 32, Fields found Kmet again, this time for 22 yards to move into the red zone at the Pittsburgh 10. The Steelers defense held though, and the Bears had to settle for a 30-yard Cairo Santos field goal to make the score 14-3 going into the half.

A roughing the passer penalty by DE Mario Edwards Jr. gave the Steelers a first down on their opening drive of the second half, but that was all they would get. Harvin came out for his third punt of the game, and it was his best one of the night, pinning Chicago inside the ten at its own seven yard line. A 17-yard completion by Allen Robinson on third and eight was followed by a 10-yard run by RB David Montgomery, which led to a 50-yard reception by Marquise Goodwin to give Chicago the ball at the Pittsburgh 14, and a first down throw to Kmet was good for a first at the Steelers’ 4. A Jimmy Graham touchdown was wiped off the board by a penalty, and the Bears couldn’t find the end zone. Another Santos field goal made it a 14-6 game with 7:43 left in the third quarter.

The Steelers got their splash play on their first play of the next drive, with Roethlisberger chucking it deep to Washington for a 42-yard gain to get in to Chicago territory at the 33. Harris converted on fourth and one, and the Steelers had first and 10 at the Chicago 23. An 11-yard run by Claypool gave the Steelers another first down, and on third and eight, Freiermuth caught his second touchdown of the game, this one from 12 yards out. Boswell’s extra point was no good, and the Steelers took a 20-6 lead with 2:08 to go in the third quarter.

With the ball back, the Bears quickly got into Steeler territory when Fields hit WR Darnell Mooney for 20 yards on the third play of the drive. Two plays later, Fields completed a pass to Jimmy Graham down the seam for 28 yards before Mooney ran in a 15-yard score, and the Bears made it a one score game at 20-13.

The Steelers aired it out again to open the next drive and a pass interference call against Jaylon Johnson moved the Steelers into Chicago territory, and then Harris caught a pass for nine yards. Back-to-back runs for no gain forced the Steelers to bring out Boswell for a 54-yard field goal, but he knocked it through to make it a two-score game at 23-20 with 11:52 left to play.

With Renegade blaring through the Heinz Field speakers prior to Boswell’s kickoff, the Steelers kickoff unit came through when CB James Pierre forced a fumble on Jakeem Grant’s return, and Boswell recovered to give the Steelers possession at the Chicago 42. The Steelers couldn’t capitalize on the good starting field position, as a sack by LB Roquan Smith knocked them out of field goal range. Harvin’s punt went into the end zone for a touchback.

A third down sack by Watt forced the Bears to punt with just under seven minutes to go in the game. McCloud was stripped on the punt return, and S DeAndre Houston-Carson recovered it and returned it for six. Santos made the extra point, and the Steelers’ lead was cut to just 23-20.

Fields got a first down on a scramble, and on third and two from the Chicago 45, Fields and Allen Robinson hooked up for a 39-yard gain to move to the Pittsburgh 16. On the next play, Fields avoided the pass rush and threw a 16-yard touchdown pass to Mooney, and the Bears tied it up at 26-26. Santos’ extra-point gave the Bears a one-point lead at 27-26 with 1:46 left to play.

The Steelers only had one timeout, but two straight completions gave them a first down at their 41. An offsides call against Robert Quinn gave the Steelers another five yards, and Roethlisberger and Johnson connected for 18 yards and put Pittsburgh in field goal range at the Chicago 32. A 13-yard gain by Freiermuth following a false start by Dan Moore Jr. gave the Steelers a second and two, but Roethlisberger spiked it thinking he had too many men on the field, but there was no flag. Roethlisberger tried to scramble for the first, but was short on third down. Boswell came out to try and make his third field goal of the game, and he was successful from 40 yards out. The Steelers took a 29-27 lead with 26 seconds left in the game.

With 11 seconds left after an 11-yard reception by Kmet, the Bears had the ball at their own 41. A 12-yard pass to Kmet moved them into Steeler territory at the 47. Fields tried to throw to the sideline for a quick out route, but it was batted away by Watt. Cairo Santos came out for a 65-yard field goal to win the game, but it was short and no good.

The Steelers will look to pick up their fifth straight win at 1:00 p.m. on Sunday, when the winless Detroit Lions come to Heinz Field.