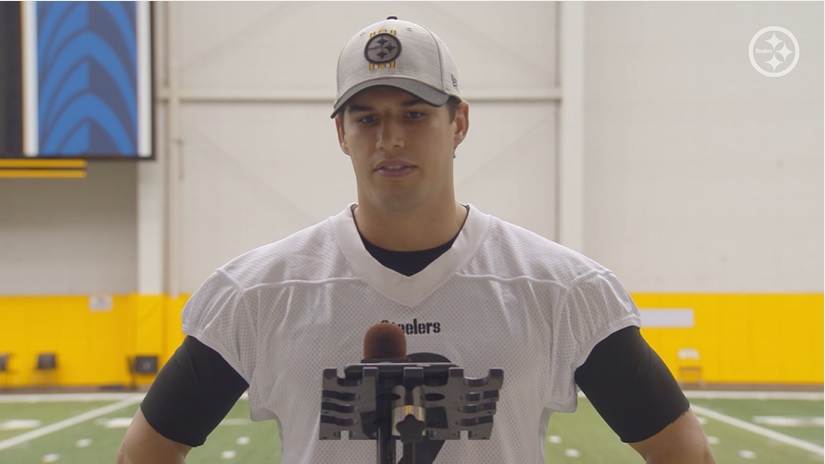 That was Dory’s motto in Finding Nemo. For Mason Rudolph, he’s going to keep on swimming until the team tells him to stop. At this point, no one knows if Ben Roethlisberger will play Sunday night against the Los Angeles Chargers. But Mason Rudolph is taking the approach that he’s the guy until someone says otherwise. Speaking to reporters after practice Thursday, Rudolph said he’s ready for whatever this weekend throws at him.

“That’s just the nature of being a backup quarterback right now,” he told reporters via Steelers.com. “There’s ebb and flow. Coach Sully calls it midstream adjust. Gotta adjust and always be ready.”

Rudolph didn’t find out he’d start last week’s Lions game until Saturday night, moments before he got to the team hotel (the team always stays together the night before, even during home games). But that’s more warning time than what backups typically get. In normal circumstances, they’re called upon mid-game after the starter gets hurt. Rudolph attempted to make the best of an unusual situation, a serviceable though far from great performance in a 16-16 tie.

He found himself in a similar situation last November when Ben Roethlisberger was placed on the Reserve/COVID list after being deemed a close contact to TE Vance McDonald, his locker neighbor. Roethlisberger wasn’t cleared to play until the day before the team’s game against Cincinnati. Rudolph said being in that situation, preparing as if he was the starter but unsure if that would remain the case, is aiding him this week.

“I think having those experiences with Cincy last year and over my career have helped me be ready to flip on a dime…you go through those storms and your hardened from it.”

Rudolph told reporters he has no inside information as to Roethlisberger’s health and availability this week. Roethlisberger will need two negative tests in order to play against the Chargers. Rudolph said he’s focused on his job.

“I really haven’t had updates…I’m moving along at the same pace as [the media is]. I’m only worried about meeting time, prep, and practice.”

Rudolph and the Steelers may not find out until Saturday night or even Sunday morning whether or not Roethlisberger will be available. Until then, Rudolph will go with the flow and keep on swimming.