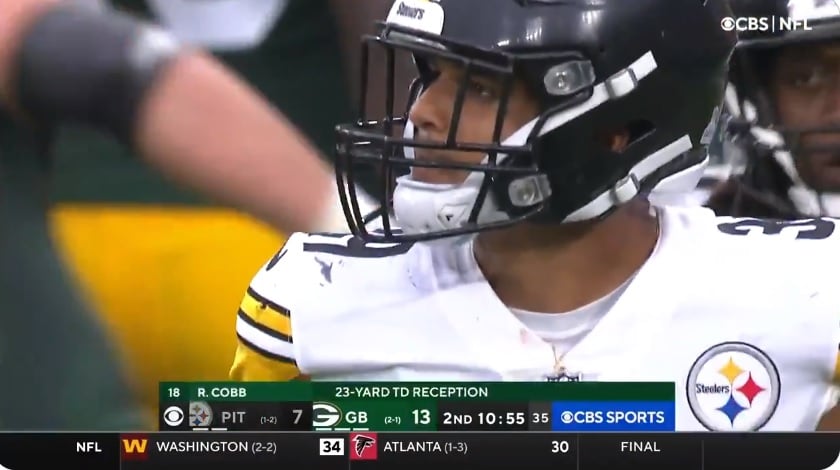 Winners and losers from the Pittsburgh Steelers 27-17 loss to the Green Bay Packers Sunday evening.

Joe Schobert – Schobert’s played his best game as a Steeler, especially in coverage. With multiple breakups his way, including two in the end zone on a Packers’ late first half drive. One vertically and another along the sideline to wrestle the ball away from RB Aaron Jones.

We’ll have to check how he was in run defense but in coverage, Schobert came up big in tough spots.

First Drive Offense – The Steelers’ first quarter drought is over. After failing to score an offensive point in 11 straight games, Ben Roethlisberger’s TD to Diontae Johnson was only the team’s second first possession TD dating back to 2019. A big play and the type of moment this team needs.

Arthur Maulet – Maulet saw a lot of action out of the slot today. Run defense was his biggest strength and in the backfield quite a bit today. Wasn’t a game-breaker but a solid performance.

Najee Harris – The stats probably don’t show it but Harris is the best, most consistent thing about the Steelers’ offense right now. Granted, it’s a low bar. Harris is an old-school, powerful runner consistently churning out yards after contact and pushing the pile forward. He’s giving it his all. He’s just in a tough situation.

James Washington – Didn’t have gaudy numbers but Washington was an asset on RPOs and caught the ball clean away from his body. Stepped up in a bad situation with Chase Claypool out today.

Terrell Edmunds – Edmunds got beat for a TD over the middle by a 31-year old Randall Cobb. I don’t know if I have to say more. Edmunds is a good athlete but slow processing and inconsistent technique and angles make him unable to play to that testing.

Run Defense – Run defense has quietly been a problem for this defense the last two weeks. The Packers consistently ripped off successful runs and got yards after contact even when Pittsburgh blew things up. This team is missing Tyson Alualu but they’re also having problems out on the edge. It’s helping to keep offenses on schedule and chew clock.

Ben Roethlisberger – The stats don’t look awful, I suppose, but the play was pretty bad. After a good first drive and pretty 45 yard TD to Johnson, Roethlisberger offered little the rest of the game. Far too many routine and underneath plays missed and two would-be TDs to JuJu Smith-Schuster that were just off the mark. Roethlisberger lost a fumble (though Trai Turner was walked into the pocket) and another hopeless, 4th down swing pass to Najee Harris that went – hope you’re sitting down for it – nowhere.

There are multiple issues with this offense but Roethlisberger is one of them. That much is obvious. He isn’t elevating the group around him and in most cases, holding them back. He’s the ringleader of one of the most underwhelming offenses in football.

Refs – Not one to complain about these guys too much and it cut both ways. The Steelers weren’t offsides on their blocked FG/returned for touchdown and TJ Watt should’ve been called for tripping on Aaron Rodgers. The missed call that went against Pittsburgh carried a lot more weight but those were two calls the zebras should’ve gotten right.

Sudden Change Defense – All week, Cam Heyward, Keith Butler, and Mike Tomlin talked about the need to respond better when the offense turns the football over. Instead, they gave up a score after Roethlisberger’s fumble. It’s a short field and tough situation, no doubt, but that’s the level this defense needs to play at right now. They’ve allowed three TDs following the last three offensive turnovers.

Mike Tomlin – Last week, Tomlin talked about how it was a “coaches game.” If the Steelers could overcome the adversity of an injury-riddled team. They didn’t. Similar story this week. Pittsburgh was healthier but they were the underdogs and in true talent, weren’t going to win. But the Steelers didn’t respond again. Some of that is on the players, of course, but Tomlin’s decision to punt on 4th and 9 in the 4th quarter was a dreadful one. Diontae Johnson is responsible for putting the team in that spot in the first place but down 17 and in Packers’ territory, you can’t give the ball back to Aaron Rodgers there.

To Pressley Harvin and the defense’s credit, it worked out. A punt inside the five and three and out. But it’s still poor process.

Big-picture, this is a 1-3 team. And some of that blame falls on a head coach whose team has lost three straight in an AFC North where everyone else is running away.