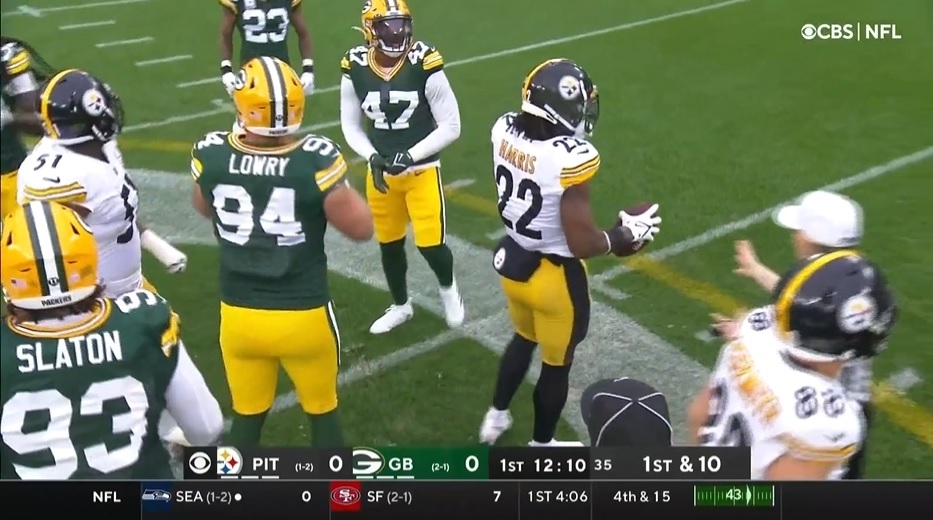 The numbers still simply aren’t there with the Pittsburgh Steelers’ offense through four weeks under first-year offensive coordinator Matt Canada.

That probably sounds obvious, considering the eye test showing how poorly the Steelers’ offense has played with the team off to a 1-3 start on the season.

However, coming out of the loss to the Green Bay Packers at Lambeau Field, if you squint hard enough, there’s some positives to take away, like the 73% successful run rate (11 out of 15 runs) for rookie running back Najee Harris.

How about the limited number of times Ben Roethlisberger was pressured, hit or sacked?

Interestingly enough, the Packers didn't pressure Roethlisberger much and he was hit just 5 times.

He threw 40 passes vs. GB and was pressured only 7% of the time

That's the lowest pressure percentage by a QB with 40 attempts in a loss since 2013, per @ESPNStatsInfo.

While those numbers certainly don’t lead to points and wins, they’re at least something positive to take away from the offense’s performance, which Canada seems to be trying to do. Speaking to the media Thursday during his weekly availability, Canada stated to reporters that he’s seen some improved efficiency from the offense as a whole, though there’s still a lot of work that remains needed with one of the worst units in football.

“I thought we were more efficient last week than we had been,” Canada said to reports, according to the official transcripts. “They [Green Bay] did a good job of holding onto the ball. They scored there late in the half and then they had another long drive to start the half and we ended up being down. But I thought we were efficient. Numbers are what they are, but we were gaining yards, getting four yards. It wasn’t like it was a negative there. Not where we wanna be just yet, but I do think there was some efficiency that was improving.”

Canada is accurate in stating that the Steelers were a bit more efficient on Sunday against Green Bay, opening up the game with a scoring drive for the first time in two seasons, and also had one of the better successful run rate showings of the last few seasons while behind a rebuilt offensive line.

While it wasn’t good enough to add up to a win on the road against the Packers, it was at least nice to see some improvement across the board. How that stacks up this week against a tough Broncos defense is the million dollar question. Can the Steelers’ offense continue to show improvement week after week?