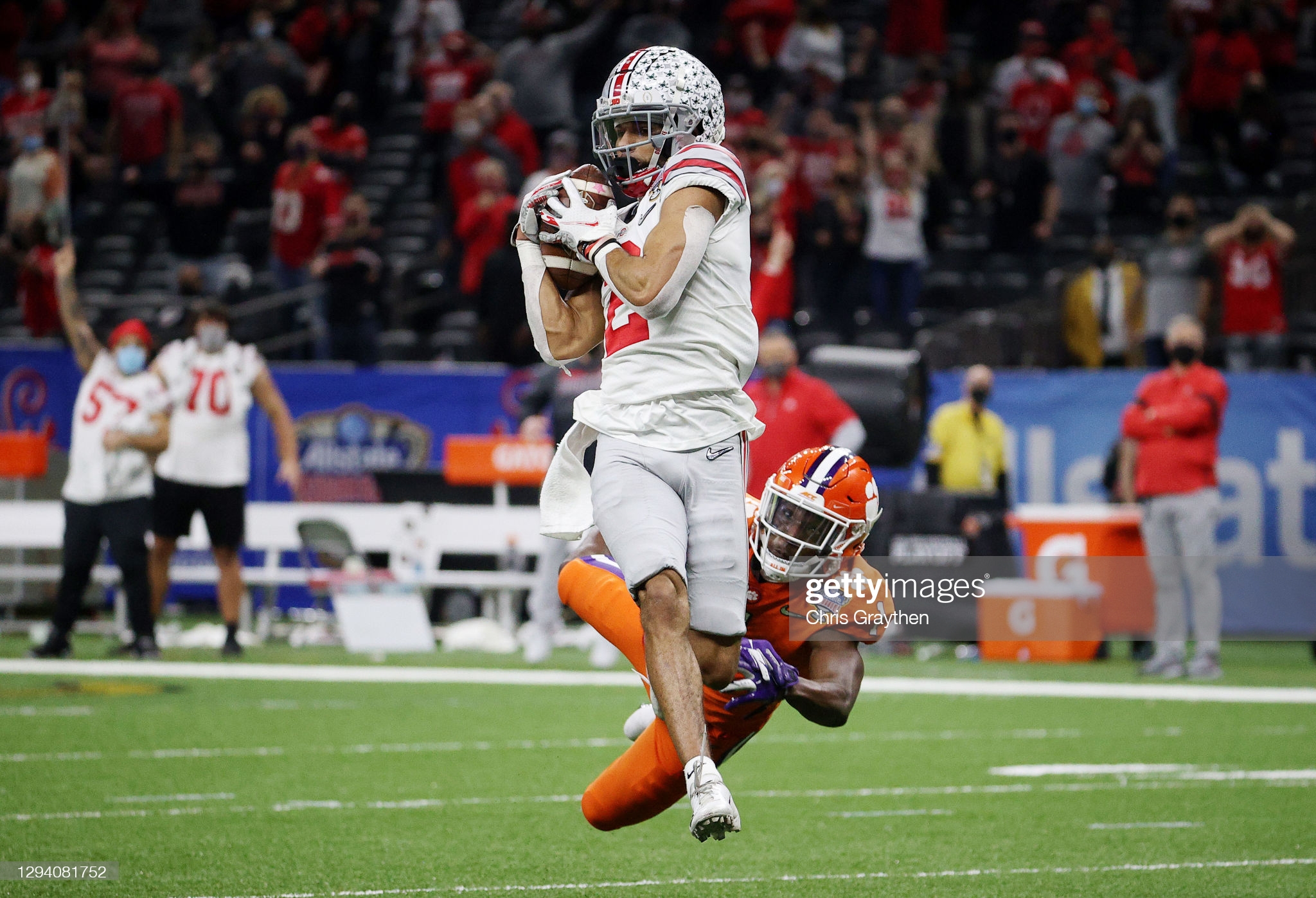 Penn State rode to 5-0 this weekend after a 24-0 rout of Big Ten rival Indiana in Happy Valley. Stud WR Jahan Dotson continued his stellar 2021 campaign with a strong performance against the Hoosiers, seeing 12 targets with eight receptions, 84 yards and two TDs. On the season, Dotson currently has 35 receptions for 446 yards (12.7 YPR) and six TDs. While more of an undersized receiver prospect at 5’11, 184lb, the Nazareth, PA native plays much bigger than his size would suggest, climbing the ladder and winning contested 50/50 balls with regularity against opposing defensive backs. With the Iowa Hawkeyes vaunted secondary on deck next weekend, Dotson will have his work cut out for him to keep his hot streak going.

DL Jordan Davis receives most of the headlines from the national media, and rightfully so, but his running mate on the inside Devonte Wyatt solidifies the Dawgs defensive front. Wyatt had himself a day in-between the hedges in the 37-0 beatdown of #8 Arkansas, tallying six total tackles (three solo), one TFL, 1.5 sacks, one forced fumble. Wyatt is a stout defender on the interior, having the size and strength to set a strong anchor against the run and rarely ever gives ground. However, he and Davis provide a strong pass rush from the interior as well, having a motor to pursue the passer and be used often on twists and stunts to get pressure on the QB.

The Georgia defense looks to be the real deal after posting two straight shutouts and stifling Clemson in the season opener. If Wyatt continues to show out as the team makes a push for the College Football Playoff, he could start to garner more national attention and rise up draft boards as a prototypical3-technique that has the size to kick inside to nose tackle or widen out as a traditional 3-4 DE thanks to the urgency in his play.

Ohio State hit a road bump at home a couple of weeks ago against the Oregon Ducks, but since then has gotten back on track to make a push for the Big Ten East. Chris Olave is a big reason for the offensive success of the Buckeyes thus far, most recently posting five receptions on six targets, 119 yards and two TDs in the 53-13 blowout of Rutgers. On the game, Olave showcased his crisp route running skills, getting in-and-out of his breaks with ease as well as an impressive leaping grab where he elevates to snag the ball out of the air and toe-taps the green before getting knocked out of bounds.

Olave is the definition of a technician at the wide receiver position, being a craftsman with his routes and makes the difficult plays look routine. His body type (6’1, 189lb) and play style are eerily similar to that of Will Fuller and even Pittsburgh’s own Diontae Johnson, and his skillset has him pro-ready to make an impact right away in the league.

Brian Robinson had to wait his turn behind the likes of Najee Harris, Damien Harris, and Josh Jacobs in Tuscaloosa, but he has now earned the lead back role for the Crimson Tide and is making the most of it. Robinson had his best performance of his collegiate career Saturday against Ole Miss, racking up 36 carries, 171 yards (4.8 YPC) and four TDs as Alabama physically beat up the Rebels to the tune of a 42-21 victory.

Robinson was the key factor of the game for the Crimson Tide offense as they kept opposing QB Matt Corral on the sideline and control the clock and pace of the game. The rushing attack did just that as Robinson ran hard in-between the tackles, carrying the load and icing the game in the second half when Alabama built up a sizable lead. Robinson doesn’t have the impressive juice to pull away from defenders in pursuit, but the 6’1, 225lb bruiser runs behind his pads well, often requiring multiple defenders to take him to the ground. Having a similar profile to current Eagles RB Jordan Howard, Robinson projects to serve as the short distance/ goal line back that best fits a power running team.

#7 Cincinnati went into South Bend, Indiana for a top-ten matchup with #9 Notre Dame and came away with a statement win over the Irish 24-13. While the defense did a great job stopping on the day led by a good performance by CB Sauce Gardner, QB Desmond Ridder had the performance he needed to lead the Bearcats to victory. Ridder finished the day 19-for-32 (59.4%), 297 yards, two TDs and zero INTs, ten carries, 26 yards and a score. While not the most impressive performance for the stat sheet, Ridder showed poise at the helm of the Bearcats offense and was unrattled in a hostile environment, successfully moving the offense down the field for multiple scores while recording no turnovers.

Ridder has the traits you look for in the modern game, having the size (6’4, 215lb) and mobility to maneuver the pocket and scramble out when necessary to create plays with his legs. He has a strong arm and can challenge defenses vertically while also having the touch to hit the tight window throws over the middle. Should he continue to develop his ability to go through his reads efficiently and maximize his athleticism, Ridder could be a name to rise up boards in the pre-draft process With Pittsburgh likely in the market for a future signal caller this offseason, Ridder has plenty of the intangibles and traits that they look for, making him a player to pay attention to the rest of the season.