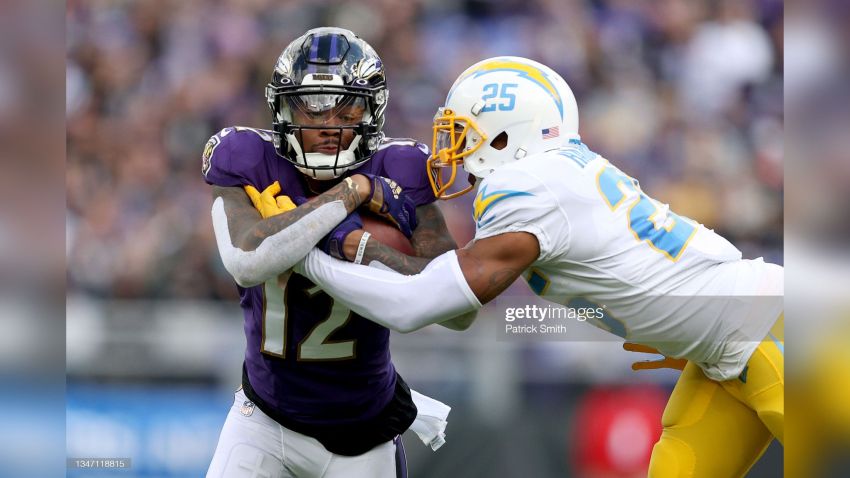 The AFC North has the most impressive rookie wide receiver in the NFL this season, that being fifth-overall pick Ja’Marr Chase out of LSU, who partnering with his college quarterback Joe Burrow is putting up exceptional numbers so far. He ranks fourth or tied for fourth both receiving yards and receiving touchdowns, having caught 27 passes for 553 yards and five scores.

But another promising rookie wide receiver in the AFC North made his debut this week as well, that being Baltimore Ravens first-round draft pick Rashod Bateman. The 27th overall pick spent the first five weeks of the season on the Reserve/Injured List with a groin injury before suiting up for Sunday’s win over the Los Angeles Chargers.

Despite having not played or even practices much since the middle of training camp, the rookie logged 45 snaps, more than was initially planned for him. He caught four passes on six targets for 29 yards, with all four of those receptions going for first downs. He did drop one pass, but his teammates and coaches came away impressed.

“He just hit the ground running”, quarterback Lamar Jackson said. “He got out there, he blocked, he ran routes, he ran corners off run plays and stuff like that. He just had a tremendous day – like he had already been in the league already, like he already played games under his belt, even though that was his first game”.

The 21-year-old comes out of the Minnesota Golden Gophers college program, where he spent three seasons. He caught 147 passes during his time there for 2,395 yards and 19 touchdowns. His season was limited to only five games last year (they only played seven due to the pandemic), but in 2019, he caught 60 passes for 1,219 yards and 11 touchdowns. The Ravens expect him to be a big part of the offense, along with Marquise Brown and Sammy Watkins, and of course tight end Mark Andrews.

“Someone asked me, ‘How do you think he’s going to do?’”, head coach John Harbaugh said. “’I don’t know, I think he’ll do well’. But he did really well. Now, he can be so much better. I think he’s excited to have that one behind him now. You get a feel for where you’re at, and then it just kind of goes forward from there”.

Jackson and the Ravens have been putting the ball in the air more this season, and that goes beyond the fact that they had a bunch of injuries at the running back position. They have actually thrown more passes than they have recorded rushes. That hadn’t even been close the last two years.