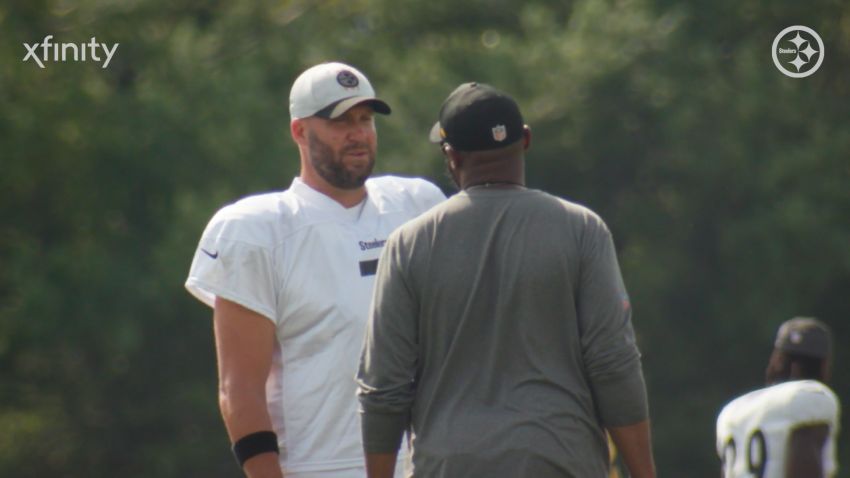 All the talk regarding the Pittsburgh Steelers’ offense in the week following the loss to the Cincinnati Bengals, aside from a porous offensive line, has centered around the play of 39-year-old quarterback and future first-ballot Hall of Famer Ben Roethlisberger.

While it has been very hard to do much of anything in the passing game behind an offensive line that simply can’t protect, Roethlisberger has also missed a number of throws and appears extremely limited in what he can do with his arm.

The discussion is nowhere near centered on potentially benching the face of the franchise in what appears to be his swan song, but according to CBS Sports’ Jason La Canfora, that discussion could start quickly should the play of Roethlisberger — and the offense as a whole — not improve.

“Steelers coach Mike Tomlin has given no indication to those within the organization that he is considering benching future Hall of Fame quarterback Ben Roethlisberger yet, league sources said, much to the chagrin of some,” La Canfora writes. “Regardless, a quarterback change is looking increasingly inevitable to some coaches and staff given how desperate the plight of this offense has become.”

It’s truly hard to fathom the Steelers pulling the plug on Roethlisberger, considering all that they did to bring him back within the constraints of the salary cap, along with the additions around him on the offense with rookie running back Najee Harris, and an entirely rebuilt offensive line, but the fact of the matter is he’s simply not a fit in offensive coordinator Matt Canada’s offense, which has left the Steelers’ new OC handicapped in terms of what he can and can’t call offensively.

“At age 39, there is fear among many within the organization that these problems will persist, undermining the season, and leaving Tomlin no choice but to go to a backup by the Week 7 bye,” La Canfora writes. “The decision rests with Tomlin, sources said, with no mandates coming from ownership, but the scope of the offensive ineptitude is lost on no one, and many of Canada’s concepts are negated by an immobile quarterback.

“…Tomlin, and the Rooney family, are incredibly loyal to Roethlisberger as he has spent his entire career in Pittsburgh and helped them win Super Bowls under two coaches. Stripping out sentimentality, and moving on from a franchise icon, is never easy, especially in this case. But chatter is growing in all sectors of the organization about the scope and depth of their issues on offense, and the sample size of those struggles is already fairly large.”

There’s no denying Roethlisberger is a significant part of the problem offensively. Believing that the offense will suddenly and dramatically improve with Mason Rudolph though feels like a real stretch, but desperate times could call for desperate measures in Pittsburgh, including a difficult decision that could rock the franchise to its core internally and externally.