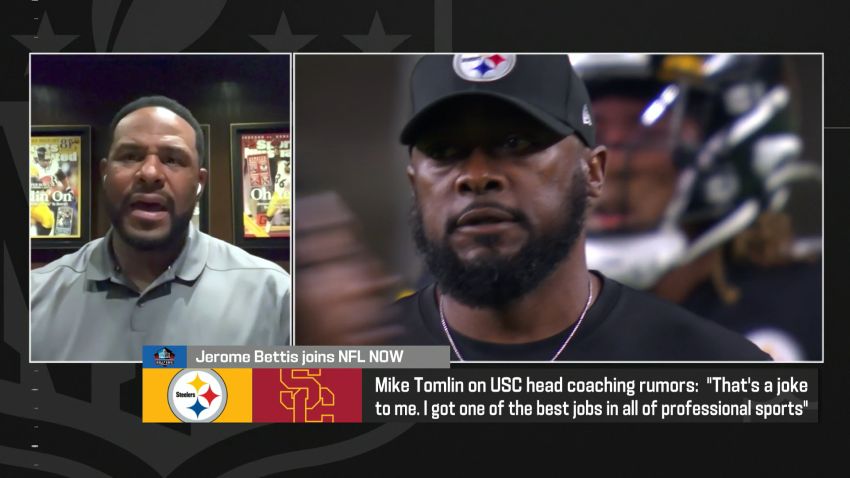 The biggest story surrounding the Pittsburgh Steelers right now, as it often seems to be, is a non-story. On this occasion, it pertains to idle speculation connecting head coach Mike Tomlin to open head coaching positions at premiere college programs. The chatter grew significant enough that members of the media were obliged to ask Tomlin to address it yesterday, and he used that opportunity to swing for the fences off of a tee.

The story has now become Tomlin’s emphatic rejection of the speculation and the very absurdity of his name coming up in the conversations, to the point where we now have people being brought on to shows to discuss why he reacted in the manner he did. I think former Steelers running back Jerome Bettis came closest to the mark that I’ve seen, asked that question on the NFL Network yesterday:

First of all, when coaches are rumored for college jobs, which is a step down from the NFL in these head coaches’ eyes, the thought is, it’s a coach that’s usually on the hot seat, or he’s not performing well, or he’s not making the grade in the NFL.

I’m sure he’s like, ‘wait a minute, you’re not asking these other top coaches’, which clearly he feels, ‘I’m one of the top coaches in the league’, and he is. So when he says, ‘hey, you’re not asking Andy Reid and these other guys about the coaching jobs’, it’s because ‘I’m one of the top guys in the league, and why are you bringing my name into this?’.

So I think there’s some offense taken because, first of all, I’m not on the hot seat, I have been performing well, I’m not out above my skis in terms of being an NFL head coach, so why this question, this line of questioning? So I think he wanted to nip that immediately so that there’s no more chatter about it, end of discussion, period.

Beyond the more abstract elements of the conversation, I really think the root of Tomlin’s response was just the notion that anybody would consider for a second that he has any interest in not being the head coach of the Steelers until he retires. This is the only job in the world that he wants.

I truly believe that, and if he were fired tomorrow, I’m not entirely convinced that he would want to take another head coaching job in the NFL. He’s made millions. He’s coaching in his 15th season. This is right around the time that Bill Cowher walked away.

And anybody could entertain for even a second that he has any interest in starting over, at the college level? I’m sure LSU and USC would love to have him, but they could offer him the Moon and he wouldn’t accept that deal.