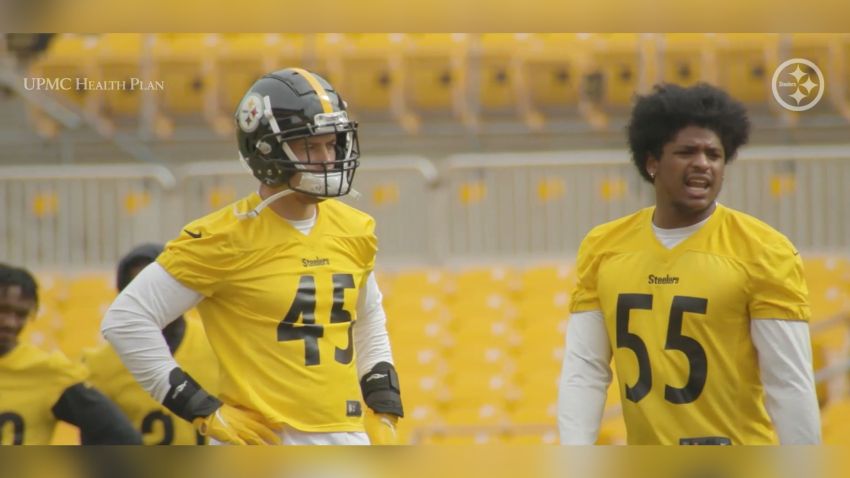 When the Pittsburgh Steelers traded for former Pro Bowl linebacker Joe Schobert midway through training camp this summer, the idea was to get a standout coverage linebacker to pair with the third-year linebacker Devin Bush, who was returning from a torn ACL suffered in Week 6 of the 2020 season.

The pairing looked very good on paper, as both Schobert and Bush could handle coverage duties, and both were sound against the run.

So far though, through three weeks the pairing is still trying to find its “happy medium” with their respective roles and usage in Keith Butler’s defense.

Speaking with the media Thursday during his availability, Bush spoke about the dynamic between himself and Schobert and how the two talented linebackers are adjusting to each other early in the season.

“…I still feel like it’s pretty early. Obviously me and Joe was still building that connection,” Bush said, according to Steelers.com.  “I would probably want to say is [we’re] not doing so good just because of the losses we took, but there’s always room for improvement. Just getting off the field on third down, three and outs, creating turnovers.”

To date, neither Bush or Schobert has forced a turnover on the stats sheet, though Bush was largely responsible for the interception Joe Burrow threw to Terrell Edmunds in Week 3 at Heinz Field.

Wanted to go back to this, since apparently this wasn't a good example and everyone does it. Bush doesn't have the splash plays, but his coverage led directly to Terrell Edmunds' INT here. Check how he carries the No. 3 (Boyd) up the field. https://t.co/4rbFvZlKBw pic.twitter.com/YCAhffDwvA

While Bush was used to playing next to Vince Williams early in his career, he’s had to adjust to a different type of linebacker in Schobert. A groin injury in Week 2 certainly didn’t help that development between the two, but Bush was quick to point out that it’s still early and that the two are working towards that perceived happy medium in the Steelers’ defense, in terms of who is handling the green dot duties, who comes off the field in certain packages, and more.

“Like I said, I think it’s still early, so I mean, there is a lot of things we’re doing differently,” Bush said. “You know, me and Scho [Schobert] being two different linebackers, obviously we are still trying to figure out that that happy medium between the two is.”

Things should start to shake out with the two experienced linebackers in the coming weeks as Bush returns closer to 100%, while Schobert continues to get more and more comfortable in the Steelers’ scheme. How that causes the snaps to be divided up at inside linebacker, especially in sub packages.