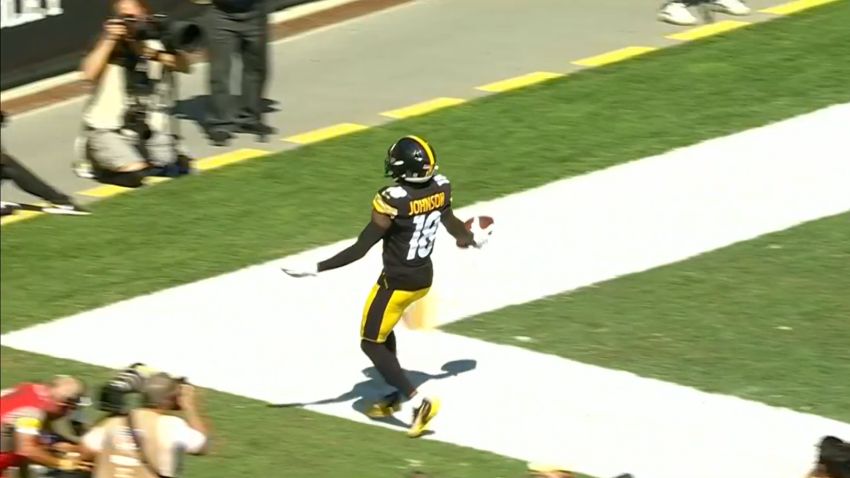 Explanation: After leading the league in drops last season, Johnson has not put one ball on the ground so far on 35 targets. He’s also caught over 65 percent of his targets, over 70 percent in his last two games.

First and foremost, Johnson’s hands were never anywhere near close to as bad as his drop numbers would suggest. Things just spiraled out of control, and he was the first to admit that it became a mental issue, one he would have to learn to manage, getting the issue out of his head.

He has worked extensively this offseason to improve his catching ability from every conceivable angle, he says, so that no matter what pass comes his way in a game, he’s seen it before and knows how to catch it.

Equally important, the uptick in catch percentage is big, because it means he and Ben Roethlisberger are more frequently on the same page. Given how often Roethlisberger throw it to him, that is a major victory, and an important aspect of his reliability.

But there are still a number of miscommunications, which are concerning. There was the interception from a few weeks back where Johnson gave up on the route, an example of himself and Roethlisberger not being in tune to what is expected of him.

And just because he hasn’t dropped any passes yet doesn’t mean he’s suddenly Mr. Reliable. He’s only played in three games. Anybody can go through a three-game stretch without dropping a pass. Wake me up in another couple months and let’s see where we’re at.

Then you have the brain fart moments, like the play on Sunday where he ran backwards when it looked like he had the angle for first-down yardage on a third-down play. Johnson has the potential to do great things with the ball in his hands, but he also has security issues, and is subject to the occasional misjudgment that makes you think twice about depending on him in critical moments short of the sticks. Which is why those balls go to JuJu Smith-Schuster.