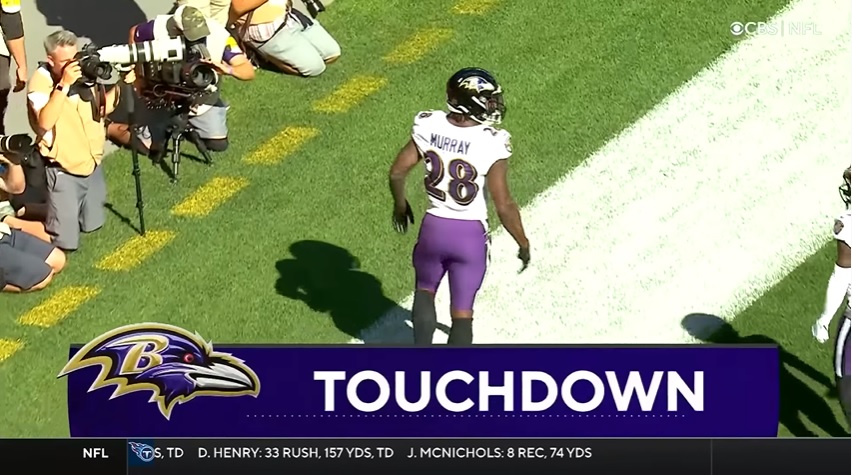 Splash plays. Every team wants them but how do they happen? This article is going to look at the defense of the upcoming opponent focusing on the three big plays they allowed the previous or recent weeks. It’ll take a look at the whole play including details such as personnel, formations, blocking schemes and route combinations. As a follow-up to each play, there will be the Steelers Scenario identifying the player or players who could benefit by running similar plays.

The Ravens have a tight end on the end of the line to the right and a wide receiver in the slot to the left. There are two running backs in the backfield with a tailback straight back and a fullback offset to the left. The quarterback is under center. Denver counters with their base defense.

After the snap, the quarterback Lamar Jackson (8) will put the ball toward the running back Latavius Murray (28) and this will pull up the linebackers. The safeties are rotating up as the cornerbacks rotate back and they will cover the deep area. The wide receiver to the left is Sammy Watkins (14), who will run a deep In route. On the other end the tight end will run a deep Curl. This is a max protect with just two routes.

The run fake will move the linebacker to their left and Watkins will press his route to the outside.  When he gets cornerback Patrick Surtain II (2) to shift to the outside he breaks inside and Jackson make the throw over the leaping linebacker for a 20-yard gain.

Steelers Scenario – So far in 2021 the Steelers have run one snap in 22 personnel. This may be a good candidate for short yardage play. Chase Claypool was the receiver in 22 against Cincinnati so he’ll be the recipient of this throw.

At the snap, the running back Devonta Freeman (33) is going to cut in front of the quarterback as he gets a soft fake, and he will run a route to the right flat. Watkins will run a shallow Cross. Tight end Mark Andrews (89) will run an Out route and Marquise Brown (5) will come on a deep crossing route from the left side.

The safety Justin Simmons (31) will drive down on Watkins crossing route and along with the route from Andrews draws three defenders. Jackson makes a Roethlisberger-like pump fake there but the space vacated by Simmons leaves a big hole in the middle with Kareem Jackson (22) playing the deep middle and that is where Jackson goes. A nifty move to avoid an attempted tackle by Kyle Fuller (23) and leads to a 32-yard gain for Brown.

Steelers Scenario – The Steelers’ 22 personnel usually uses Juju Smith-Schuster and either Claypool or Diontae Johnson. Smith-Schuster would likely be on the shallow cross and Claypool/Johnson can run the deep over route.

The Ravens will have three receivers bunched to the right, one receiver to the left and a running back flanking the quarterback to the left. Denver is in their nickel personnel and will drop one safety to the deep middle of the field.

The Ravens caught Denver in a blitz with linebacker Justin Strnad (40) coming right away and linebacker Alexander Johnson (45) will green dog blitz when he sees the running back staying in to block. This blitz along with the Man coverage on the Watkins route leaves no one there to cover Proche. Jackson hits him with and eight-yard pass that turns into a 32-yard gain.

Steelers Scenario – There is a little luck involved catching them in a blitz, but with the shallow crossing routes they could still execute a rub there to get them open. I think you put Johnson in the Watkins role and Smith-Schuster in the Proche role, and if it’s not there you give Claypool a chance on the deep out.