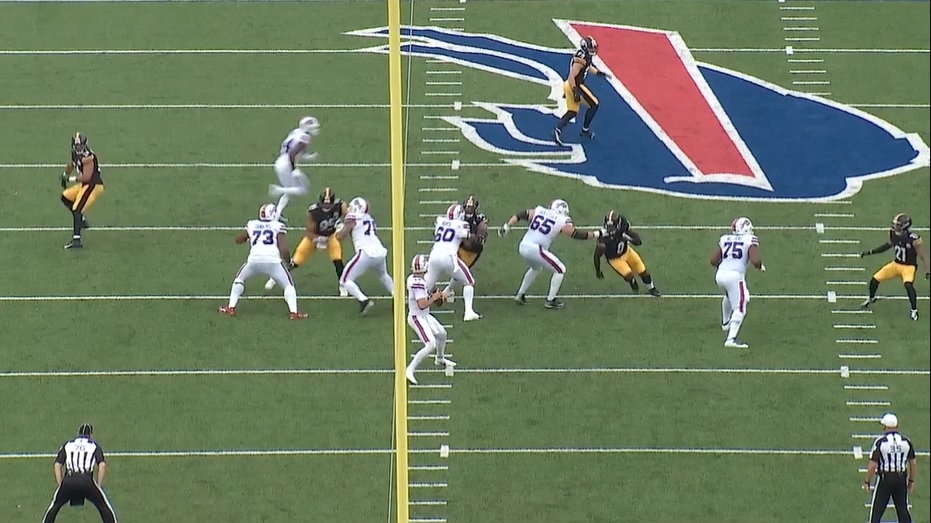 The Pittsburgh Steelers rarely blitzed in Sunday’s Week 1 win against the Buffalo Bills. But that doesn’t mean they failed to bring heat. They found ways to creatively rush four with twists, stunts, and off-ball “safe pressure” as we outlined earlier in the week. Talking with reporters Friday, T.J. Watt spoke to the need to not be a static rushing team, even if they’re only sending players who get paid to sack the quarterback.

“It’s just a way to get moving with four,” Watt said via video from the team about the reason for running stunts and games. “Making it almost look like a blitz. We can bring five out of a look like that too. So it’s just adding a different wrinkle to a four man pressure to make it look different and to get different types of matchups on it.”

Pittsburgh predominantly sent just four against the Bills. In fact, they sent five or more rushers just one time, according to our charting. But they found different ways to send four. Not with straight up rushes but with loops and games to keep the Bills’ offensive line guessing. Watt said that’s the overall idea.

“We know that if we’re not going to blitz, we’re not just going to sit there and give you the same look every single time either.”

As Watt said, moving around and attacking different players forces the guard to take on a new rusher he hasn’t seen and may not have prepared for. The way Watt versus Alex Highsmith versus Melvin Ingram rush are all different and it’s certainly a different style and body type compared to Cam Heyward or Tyson Alualu. Those kinds of creative rushes doesn’t allow a lineman to get comfortable in his pass sets and begin to anticipate rushes or a style of rush. And that goes a long way to pass rush success.

Watt also lined up off-ball a handful of times and described how that changes his pre-snap keys and reads.

“You gotta know what you’re looking at. I think that’s the biggest thing is when you’re sitting in the middle. You have so much to look at. You’re not just on the edge looking at your tackle into the backfield. You’re seeing the whole field and knowing just know what you’re supposed to be keying on.”

Should Pittsburgh choose to employ a three outside linebacker package and have Watt, Highsmith, and Ingram on the field, one of them is likely to line up off-ball. That’s one workaround to not having a stud pass rusher like Stephon Tuitt on the field. And it’ll force offenses, like the Raiders this Sunday, to have another layer to prepare for.