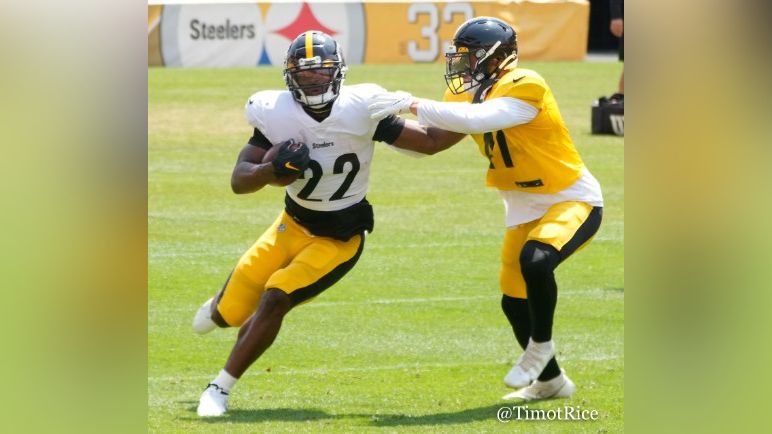 Pittsburgh Steelers’ rookie running back Najee Harris was never one to back down from a challenge in high school or college at the University of Alabama.

That mentality of wanting to be the best and take on the best has carried over to the NFL, helping him hit the ground running and develop at a rapid pace right away in the league.

A lot of that can be credited to Harris’ willingness to seek out the best opponent in every situation in hopes of getting better and better on each and every rep.

Speaking to reporters Friday just two days prior to his NFL debut for the Steelers on the road against the Buffalo Bills at Highmark Stadium in Orchard Park, Harris said he enjoys the “iron on iron” part of daily and weekly preparations, seeking out the very best to become the best version of himself.

“Yeah, like the Steelers, you know, one of the models is iron on iron. So, you know, that’s how it is in practice everyday,” Harris said to reporters Friday. “I make sure I call out some of the best guys over there just so I can get a good rep…so it can translate in the game so much. So, I mean to go up against everybody, you know, it’s always good for me just so I can get a feel of the speed and you know, every time I go up against one of them I’m actually reading what they do, you know, I’m getting a good feel of how they play things. I’m going up to, I remember going up to [Robert ] Spillane a lot and asking him like, you know, like for you to do that, what’d you see? What did you see in my alignment? Or would you see like, what’d you see me doing here was like break it down to me. Like, you can’t do this, this, and this. You gave…any indication that you’re doing this, you know? So, to get that iron on iron work, it’s always good, man.”

No matter what happens with Harris as a rookie in the NFL in 2021, his commitment to his craft and his overall work ethic each and every day can never be questioned. The guy just gets it, which is so impressive from a rookie of Harris’s pedigree and superstardom. The game no doubt comes easy to the first-round running back, but he won’t rest on his laurels, which should rub off on the rest of his teammates over the years as a Steelers, ensuring that The Standard continues to be met in the Steel City.